Quick Silver is the het ship between Ruby Rose and Mercury Black from the RWBY fandom.

Ruby and Mercury first met officially in volume 2, chapter 2. Ruby is seen running and the accidentally runs into him, emerald and cinder. They help her up and then tell her that they're visiting from haven. Ruby then tells them they're in the wrong dorm to which Mercury claims that he guesses they must have gotten lost. Ruby then redirects Mercury along with Emerald and Cinder to where their actual dorms were. Cinder then thanks her and says she hopes they'll see each other again.

In volume 2 chapter 5 Mercury's fights against Pyrrha and Ruby watches in the audience. She is then impressed by his combat abilities, seeing as he was able to hold his own quite well against someone of Pyrrha's caliber. In volume 3 chapter 8, Ruby runs into Mercury again after his injury sustained by Yang. She then becomes suspicous as to what he's doing there since he was susposed to be in an ambulance to a hospital from his broken leg. She then tries to run past him but Mercury doesn't let her, Ruby then uses her speed semblance on him to try and get past him and suceeds.

After Penny is "killed" Ruby falls to the ground and starts crying, Mercury can be seen smirking at her in the background. The two then don't see each other again for awhile until the middle of volume 5. In volume 5 chapter 13, While Ruby was fighting Mercury she eventually becomes disarmed by him. He then smugly asks her how she's going to fight him now that her weapon has been taken away from her. Ruby then decides to head butt him in the chin, thinking that that was the best way to shut him up. She then joins Yang later on during her fight with Emerald and Mercury.

Quick silver is a rarepair in the rwby fandom. In the RWBY: Official Manga Anthology, Ruby is reluctantly pulled onto the floor by Mercury as a partner during the Beacon Dance. Most people who ship the two like the whole enemies turned to lovers trope. Some fans are hopeful the two might become friends later on since Emerald has joined the heroes side. It has a small sized fanbase on tumblr. 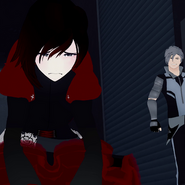