Raire is the het ship between Ravus Nox Fleuret and Lightning Farron from the Final Fantasy fandom.

As Lightning and Ravus are from different Final Fantasy series, they have never met in canon.

They do, however, have a similar white-black outfit designs that drew attention to the resemblances of each other's garb, as well as their overall motives and stories. Since their characters share a similar archetype which leads to many parallels being able to be drawn between the two. From both of them being two stone cold soldiers, who were orphaned at a young age, their only weakness being their sister, yet they slowly learn to trust others. In which has both Ravus and Lightning becoming emotionless out of necessity. Ravus out of need to let the Empire think his loyalty remained only to them to keep his country and little sister safe, while Lightning felt the need to be more mature for her little sister as they were now orphans, and since they were both young when the tragedies that caused them to make that choice happened, they decided that there was no other way to do it.

Ravus and Lightning also have a similar loathing for the fiancés for their sisters, and confrontations would often rise to conflict. Yet they would both end up having a mutual respect for their new brother-in-law. As Lightning traveled, fought along side and had even saved Snow's life a few times and that allowed her to give Snow and Serah her blessing to their marriage. Along with Ravus choosing to help Noctis and to give him the Sword of the Father, so he could honour Luna's wishes and his memory of her; and when Ravus became a daemon he used what remained of his humanity to beg Noctis to kill the monster he became. In one of the altered versions of FFXV, Dawn of the Future, Ravus's spirit watches Luna and Noctis being happily wedded, while the alternate ending of the DLC, Episode Ignis, has an older Ravus bequeaths the Sword of the Father to Noctis in person. There was even a time where Lightning herself was fated to become a Cie'th if she didn't uncover her fuse in time, but Orphan had created an illusion of her monster transformation to hurt two of her friends. Ravus had also faced his fair share of illusions, the first one he saw right through while his near-death state during the second one had gotten him killed.

Along with them saying mirroring of lines that relate to their dead sisters, as Lightning's from the ending of Final Fantasy XIII: Lightning Returns, when she had made up her mind to stay and control the chaos, she cried out "Serah! Wait, don't go! Please, don't leave me alone!", while Ravus' from the Final Fantasy XV DLC, Episode Ignis at the end of "The Two Protectors" was "Oh sister, please don't go! Please don't leave me...".

While Raire is a fairly new ship, over all support has been mixed reviews. Some people encourage it and are fairly receptive to it, with some Tumblr posts reaching 100+ notes and YouTube videos doing fairly well. On the other hand, others seem to hate the ship, even though it's rather small with few content being made for it.

For creators, the only two making content for the ship is on Tumblr, with the URLS of GiveLightningHerHarem and TenebraeTrash17, who has made a list of their many similar traits, no other sources have been found contributing to the ship, other than a fan art found reposted on instagram in 2017 with no credit.

Since both Lightning and Noctis are part of the Dissidia Final Fantasy series, there is a chance that Ravus might get added to it in the future. In which would have him fighting along side Lightning as an ally, or against her as a foe. 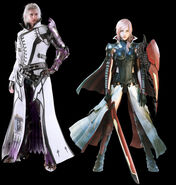 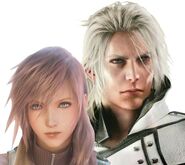