“There is only one such place in this world. A place that doesn't need you at all. Join the Detective Agency. We don't want your ability. What we want is that "kindness".”
— Ranpo to Akiko, when they first met.

Ranposano is the het ship between Ranpo Edogawa and Akiko Yosano from the Bungou Stray Dogs fandom.

In chapter 7, they seem to know each other well, with Ranpo correctly anticipating Yosano's quirks and hobbies like asking someone in the Agency to accompany her shopping. Ranpo says that that ability to notice dangerous is a good one, "For example, 10 seconds from now...", just as Ranpo trails off, Dr. Yosano walks into the room with a yawn, asking if Atsushi is hurt, then asks if Atsushi would help her with shopping since he's the only one here, Atsushi turns around, confused when he sees everyone is gone, recalling them talking about the ability to sense danger.

In chapter 21, on casual occasions and even during the Guild war, Ranpo invited Yosano to play a game with him, particularly hanafuda, while Yosano accepted and fiercely asked what their wagers shall be.

When Akiko and Ranpo were together in Poe's novel, trying to solve a mystery. Ranpo insisted that he has an ability and that abilities could not be used in the book world so he can't solve the case. After that, Yosano is determined to capture the killer and is seated in her room on her bed with an axe. When she was about to die, she placed her trust in the great detective for whom the Agency was established, said that the ADA was found so Ranpo could make good use of his talent which made him looks straight at her with his eyes wide open. At that time, Ranpo was using his left hand to hold Yosano's shoulder and using his right hand to hold her left hand.

In the last moments, Yosano thanked Ranpo for recruiting her to the organization, told him she was still "very grateful" even to that day. As Yosano "died", Ranpo freezed, then gnashed his teeth, took her glasses, worn them himself and solved the case, came back out of the book unharmed with Yosano . Finds out it is the first time he solve the case without relying on his glasses and "ability", after Fukuzawa gave him the glasses and told him that he was an ability user.

After that, as Ranpo and Yosano are walking back, Yosano mentions that Ranpo doesn't actually have an ability. Ranpo declines and insists he has an ability, telling her not to call him normal. He was embrassed that he would look stupid if he turned out to be normal now, aftel all the time thinking he was gifted. That make Yosano lauging and Ranpo told her not to laughing, she said "Fine, fine" and he kept complain "No "Fine, fine" either"

Fourteen years ago, near the end of the Great War, the 11-year-old Yosano served as a military hospital scholar alongside Mori, erstwhile a military physician for the National Defense Force, and utilized her ability to heal soldiersIn the past. After the "Tripatite Tactic" plan failed, Yosano was being kept under arrest in the ship’s bottom which has lined with explosives in oder to sink the base. After the War, she was kept isolated in a facitity. Didn't give up, Mori found the 14-year-old Yosano and got her out. Ranpo and Yosano first met, when the Detective Agency had only one member - Ranpo himself. Fukuzawa and Mori were fighting with each other, because of how Ougai treated Akiko and Edogawa was spending his time with Yosano escaping with her. Akiko was in a really deep depression back then.

She thought it was her fault, her ability's fault that someone important to her died. She didn't want to escape. She thought her ability was horrible and she didn't want to continue living with it. She told Ranpo that she can't go on living like this. Edogawa after that, with his usual cheerful attitude, told her it's stupid and she should just stop using that ability if she hates it so much.

Akiko didn't believe him. Ranpo told her his ability is the world’s greatest, so at the ADA she wouldn’t be called upon. He proof it by give her the gold butterfly hairclip which the soldier gave Yosano as a gift. That is the first time after these years Yosano’s numbness face were broken.

She asked Ranpo how could he know when she never told anyone about that. He happily said that he could see through everything and she could pose any kind of question.

So Yosano asked him what should she do from now on and asked if there's a place where it's okay for her to go on living, Ranpo said he has already said it. He told Akiko that there's only one place that doesn't require her at all - The Detective Agency.

That they (him and Fukuzawa, at that time) don't want her ability. "What we want is that kindness". They want to invite her because she has this "kindness". After heard it, she couldn't hold back the tears and at that moment, she was freed from suffering and despair. He was the first person who told her that it's her feelings that matter, not her ability. At the present, when she remember this conversation, she remember it with a smile.

Ranposano is one of the most popular hetero ships in the Bungou Stray Dogs fandom. Its biggest rival ship is Ranpoe. 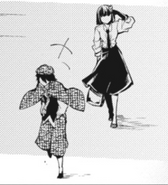 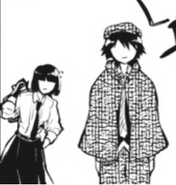 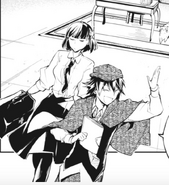 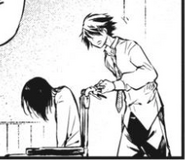 Tales of the Lost 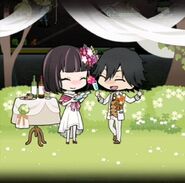 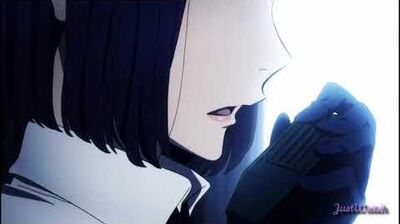 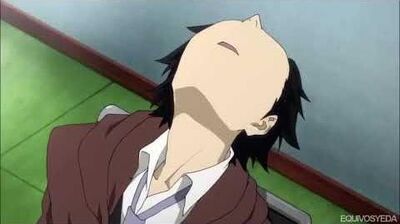 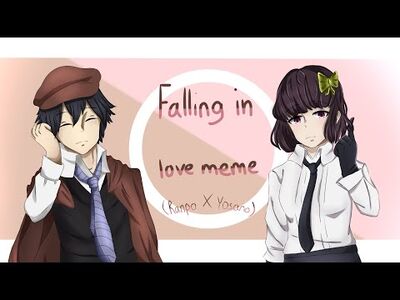