Classmates; both are dead

Rantenko is the het ship between Rantaro Amami and Tenko Chabashira from the Danganronpa fandom.

The two rarely interact in canon due to Rantaro's early death in the first chapter and Tenko's strong hatred towards men. However, in Chapter 3, after Ryoma's death, she says this,

"My determination is maximum! I will avenge Rantaro!

Oh, and I guess...Rantaro and Ryoma's wishes too. Might as well..."

However, this seems to be the only time Tenko has spoken about Rantaro, Tenko wanted to fulfill Rantaro's wishes which were to end the killing game and escape the Ultimate Academy alive in order to put an end to the killing game which were along with the other recently deceased wishes too.

During Rantaro's body discovery in Chapter 1, Tenko was the first four to discover Rantaro's body in the library as well she seemed to be the most terrified out of the bunch, Tenko was also the first four to find his body. The two don't really share as much similarities instead of both are well known to have great respect for females as Rantaro has twelve younger sisters meanwhile Tenko would play as a superhero with her master and comfort women over bad break ups, help old women with heavy luggage, as well protect women from sex offenders.

The ship isn't too well known due to the little interaction between the two and Tenko's strong hatred towards most men, as well due to Rantaro's early death in-game and her crush on Himiko Yumeno. Not many are aware of this ship and it's not very popular but still has a small number of supporters. Regardless it's implied Tenko can have romantic feelings for a person no matter the gender. [1] Although it is confirmed that the Love Suite is non-canon, so the evidence for Tenko being bisexual is fanon.

The ship sailed as a result of people thinking that Rantaro could help ease Tenko's hatred for men, considering his chill and brotherly personality. Plus, some people believe she might be helpful whilst Rantaro is looking for his sisters, considering Tenko's attitude towards women. However, the only men that she approves of in the series so far are Shuichi Saihara and Gonta Gokuhara. Before Tenko was captured it was revealed that she and her master would help women over bad breakups and despite Rantaro having twelve sisters a few fans like to imagine Tenko helping comfort Rantaro's sisters over bad breakups. The two are also well known to be respectful to women as Rantaro reveals he isn't into romance (as he's constantly called a womanizer) and sex, dislikes casual hookups, and doesn't like anything explicit rated (adult books/magazines) which tends to make him feel uncomfortable about it, also Rantaro is a caretaker for his younger sisters and would do things that are considered to be very feminine for males like doing nail art.

The ship tends to be very controversial due to Tenko's hatred against men which makes most fans believe that Tenko is homosexual, while the other half believes that Tenko can be bisexual or pansexual with a female lean, as she mostly mentioned she hated degenerate males who are perverted and rude (like Kokichi Oma). Another example is her harmonious heart event as she questioned herself why does she hate men so much, especially when Shuichi realized that Tenko is very gullible (not keeping a clean environment, eating three sweets a day, or being in relations with men will make her neo aikido spirit weak) and believed anything her master (in fact a male) had said in her free time events as a way to only control her bad habits.

Some people also ship it due to their color palettes. Tenko having a blue and green color palette while Rantaro having a green and blue one. Some fans find it very aesthetically pleasing as they are very similar.

It's main ship rivals are Tenmiko and Amamatsu. It's one out of two of Tenko's most popular het ships, the other one being Chabahara. 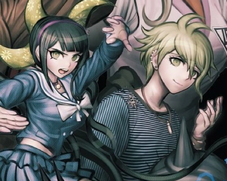 Tenkoumami refers to the ship between the two and Kokichi Oma.