Ranzumi is the het ship between Rantaro Amami and Mahiru Koizumi from the Danganronpa fandom.

The two have never interacted in canon, since they are from two separate Danganronpa games. Mahiru being from Super Danganronpa 2: Goodbye Despair and Rantaro from Danganronpa V3: Killing Harmony. Although they never met in the official games, the two shared a seasonal event in the board mini-game Ultimate Talent Development Plan featured in the Killing Harmony bonus material that is available after finishing the game. This event is only accessible when playing through this mode with Rantaro.

Within this event, Rantaro visits Mahiru's photo exhibit during the school festival and offers her a genuine compliment, which she graciously accepts (Mahiru has famously high standards for feedback on her photography, which Rantaro meets without needing to be told). He then remarks that there is a great deal of pictures of everyone eating, to which Mahiru explains that those photos were taken at a time when Teruteru cooked food for their class. Mahiru notes that she would thank Teruteru Hanamura for the occasion if she respected him, which she doesn't, and Rantaro replies that while he does see good in Teruteru, he agrees that he's hard to defend.

In addition to their Ultimate Talent Development Plan event, Rantaro and Mahiru also interacted a wide variety of times in the bonus game Danganronpa S: Ultimate Summer Camp. In total, the pair interacts in one friendship event that they both share, in one of Mahiru's "Campfire" options, and in Rantaro's final "My Future..." event.

In the basic friendship event, Rantaro catches Mahiru photographing him, and she admits that she's been taking photos of him for a little while without him noticing. The pair relate about never really taking any photographs of themselves, with Mahiru just capturing other people, and Rantaro only taking pictures of scenery and wildlife on his travels. Mahiru proceeds by noting dejectedly that she doesn't have very many pictures of Rantaro, since he's not around school much, not even at school events. She then resolves to make up for lost time with him within the summer camp. Noteworthy about this scene is that it makes Rantaro one of two male characters that Mahiru explicitly makes a point of wanting photographs of, the other being Hajime in her Super Danganronpa 2 Free Time Events in which she developed a crush on him. This may imply that Mahiru has a crush, or at least the inklings of one, on Rantaro.

In Mahiru's Campfire event, the pair have another similar conversation, in which Mahiru proposes that she take a group photo of Rantaro and his class. Rantaro comments that it's not every day he has an oppurtunity like this, and Mahiru makes a point that since whenever she took a group photo of his class before, he was always not present or ended up on the edge. This time, she insists that he be the main focus of the photo for a change.

In Rantaro's "My Future..." event, accessible only when the player has all four of his character cards, Rantaro cooks a meal in an attempt at Japanese cuisine for Mahiru, Teruteru Hanamura, and Kirumi Tojo. Rantaro confesses that it's not perfect and just a rough attempt based on his experience making survival foods, which Mahiru notes is impressive in its own way. Everyone proceeds to offer him constructive criticism, and when Rantaro halfheartedly goes along with one of Teruteru's questionable remarks, Mahiru says that he shouldn't feel the need to do that. Everyone tells Rantaro to make certain that he's eating well out on his travels, with Mahiru talking about the appearance of the food itself helping to lift his spirits. Rantaro talks about his concerns that all he's doing is worrying everyone, to which Mahiru states that he never really talks about himself or having fun on his travels. This is obviously because he spends his travels looking for his sisters. Mahiru then says that she's concerned for him, since he doesn't plan to stop anytime soon. Rantaro then resolves never to forget any of the friends he made at school, and to keep everyone in mind as he travels.

Having three interactions in Danganronpa S: Ultimate Summer Camp like this means that Rantaro and Mahiru interact in that game the maximum number of times that any pair of characters do, in fact interacting just as much or more than some of their more popular ships. One other noteworthy piece of information from Danganronpa S is Mahiru's "With Swimsuits" event, featuring herself alongside Kotoko Utsugi and Mukuro Ikusaba (disguised). The three engage in some "girl talk" that concludes with Mahiru hastily dodging and refusing to answer a question from Mukuro involving if she has feelings for someone, and who it might be. While no names are named, this does at least confirm that Mahiru has romantic feelings for someone attending summer camp.

Mahiru is a character with an incredibly strict moral code, and a desire to help as many people as she can. This is also notable of Rantaro, who in his killing game, went out of his way to risk his life (and even get himself killed) because he was trying to end the game and save everyone else.

Mahiru, due to a less-than-reliable father being her single parent growing up, has very high and traditional standards for the role that men are meant to play in relation to the women they interact with, claiming that men should look after and protect women. Rantaro is an individual who does all of these things to an even self-destructive extent, having lost 12 of his younger sisters around the globe, and spends most of his entire life searching for them as best he can. He even puts himself in danger often to achieve this goal.

Rantaro's real Ultimate Talent, as revealed in his Salmon Team ending, is the Ultimate Adventurer, in relation to his frequent travels. One of Mahiru's confirmed "likes", as confirmed by her student profile, is travelling.

Ranzumi is a cross-game rarepair within the fandom. While its shipperbase is very avid and active where it exists, it's not very popular due being a cross game ship between characters with already very popular ships. Examples would be Soapies for Mahiru or Amasai for Rantaro. As of November 2021, The ship only has 10 fan fictions on AO3, though one of which is over 600,000 words featuring it as the primary pairing and Rantaro as the first-person protagonist.

This ship sailed for several reasons. Both characters express caring, "older-sibling" energies when interacting with their fellow students, both love travelling (thus opening the door for travelling together), and Rantaro exhibits all of the traits that Mahiru explicitly states that she wants men to exhibit in spades. Also, Mahiru is notably incredibly unhappy in her home life but has no way to change it, so Rantaro sweeping her away to live with him instead would make for a cute fanon dynamic. Another popular idea would be for Mahiru to accompany Rantaro on his search for his sisters, documenting their travels as a photographer.

The synergy of their talents, Ultimate Adventurer and Ultimate Photographer, should not go unremarked. Mahiru is known for enjoying smiles and photos of smiling people, and Rantaro fakes a good deal of his smiles as a defense mechanism, so a common fanon idea between these two would be that Mahiru may be able to tell when Rantaro fakes smiles. 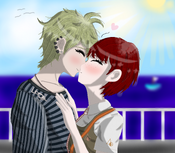 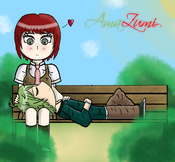 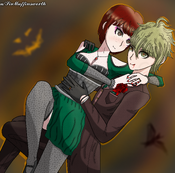