Razber is the het ship between Amber and Razor from the Genshin Impact fandom.

However, of course no matter how many times the Traveler asks her, Amber says she doesn’t know what they're talking about. And so, somehow later on Amber happens to encounter Razor. Once Amber and Razor meet each other, Razor asks if she’s also a knight, saying he doesn’t know her. Razor then asks for help, and Amber responds asking with what, however he says there’s no time to explain, but Amber says she has some questions, however gets interrupted by Razor once again. Amber later on asks Razor where the word Lupical came from, and Razor answers, however Amber quickly asks another question, which Razor also answers.

Razor then says he sees another clue, and Amber says it’s his chance to prove his innocence, however he’s already gone by then, causing the two to chase after him. When Amber finds him again, she once again asks him to prove his innocence, and Razor says it wasn’t him quickly. Amber and Razor then go search more, and Razor eventually says he'll stay with Amber, and answer “red girl's” questions, a nickname he gave Amber. Later, when some people begin suspecting Razor, Amber tells them to stop, which they get annoyed by and leave. Once they're gone, Amber asks Razor why he doesn’t come in the city for a few days, saying he's not safe in the wild anymore. However, Razor declines the offer saying he’s fine. He also then thanks Amber and the traveler, calling Amber “red girl”, which makes Amber get frustrated that he still doesn’t know her name.

Razber is a rare-pair within the Genshin Impact fandom, with many rivals. Specifically, Rannett, Rannschl, TVT DREAM, EulAmber, Lumber and Amther. The ship sailed due to Razor's storyquest, since it’s currently their only shown interaction. Some people may prefer this ship as a friendship, while others may prefer it as romantic.

Razber currently has 17+ works on AO3. 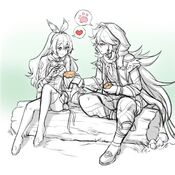