ReNora is the het ship between Lie Ren and Nora Valkyrie from the RWBY fandom.

Ren and Nora are childhood friends who met in Ren’s village Kuroyuri. Ren saw Nora getting bullied by the local village kids for having stolen bread and for dressing weird according to them. Ren later finds Nora during the attack on Kuroyuri and helps keep her calm with his semblance so he can hide them both from the Grimm. With both their families seemingly gone as Nora was an orphan who had appeared in the village one day and Ren’s parents had been killed in the attack the two have stayed together right up to their enrollment at Beacon.

They become partners at Beacon and are a part of Team JNPR. While at Beacon it is clear that Nora has developed feelings for Ren but is quick to dismiss any idea of them being "together-together". However, she still becomes flustered when their relationship is mistaken for romantic.

After the fall of Beacon they join Ruby in her journey to to Mistral, in which they spends several months debating on a team name for their new group. During their travels, Ren and Nora become aware that the Nuckelavee, a Grimm that attacked Ren's home and killed his parents, is in the area. Later when Nora and Ren break off from the rest of the team to help find aid for a poisoned Qrow, Nora comforts Ren and agrees that they have always taken care of each other.

During the battle against the Nuckelavee, Nora slaps some sense into Ren as he recklessly tries to attack the Grimm, shedding tears as she tells him that she will not let him get himself killed. Ren composes himself, and the two defeat the beast with the help of Ruby and Jaune. After the battle while on an airship to Mistral, Ren reaches out to hold Nora's hand, surprising her. She then moves closer and rests her head on his shoulder.

In Volume 6, while Ren destroys the shield generator on Caroline Cordovin's mecha, Nora fires a volley of grenades at her, crying out, "You get back here with my man!". Together, along with the rest of the group, they succeed in temporarily taking down Cordovin's mecha.

In Volume 7, Ren starts being a bit distant towards Nora. She attempts to compliment his new outfit only for him to say that they need to focus on the mission, and he is shown to sigh or shake his head whenever Nora seems to get distracted. This unspoken tension builds up until Nora eventually confronts him on the matter. They have a small argument over their responsibilities in regards to their world saving mission, and Nora urges him to talk to her about things to work them out. However Ren states that he’s never been good with talking. This causes Nora to say that they should screw talking before grabbing him and planting a kiss on his lips. Ren is momentarily shocked but soon closes his eyes and wraps his arms around her, confirming that he indeed reciprocates her romantic feelings.

In Volume 8 they spend most of it separated and missing each other. After he finds out Nora was injured when they were apart Ren is very worried. He goes to talk to her by her bedside and apologizes for being distant. Nora confesses to being in love with him (which he reciprocates) but she says that she isn't ready to be in a relationship at the moment, which he understands.

ReNora has always been a well-liked ship within the RWBY fandom. While Nora's feeling for Ren were fairly obvious from the start, the ship became more popular following the release of "Boop", a song from Nora's perspective with the lyrics - "When I wanna say 'I love you' I'll say 'Boop'".

Its fans only grew after the ship seemed to go canon in Volume 4. However, while not decreasing the ship's popularity, fans grew frustrated after Volume 5 and most of Volume 6 not containing any references to the ship, throwing its status as canon into question. 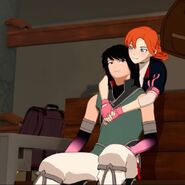 RWBY Ren and Nora AMV Stand by You

In The Name Of Love - Bebe Rexha (Renora AMV)