Best Friends; crush on Richie's side; Eddie is dead

• A Shared Suffering
• Aborted Declaration of Love
• First Love
• Internalized Categorism — Internalized Homophobia, due to growing up in a small, close-minded town and, in Eddie's case, being incredibly confused and afraid of sexuality.
• Star-Crossed Lovers
• Vitriolic Best Buds
• You Can't Fight Fate

Reddie is the slash ship between Richie Tozier and Eddie Kaspbrak from the IT fandom.

Richie and Eddie, from Derry, Maine, have been best friends since kindergarten. They met through their friend, Bill Denbrough. Ever since they were children, they bicker and tease each other. Richie always calls Eddie "Eds" or "Eddie Spaghetti" and even calls him cute, just to get a reaction from Eddie and Eddie was not always pleased, saying that he hates it when Richie calls him that but that was not true. And this has been going on while they were growing up. Not only do they have hilarious banter back in forth, but it’s very obvious they also care about each other immensely.

When they were young, Pennywise the Clown or "It" started terrorizing the town of Derry, Maine. Pennywise lived on people's fears.

The first victim mentioned in the book was Adrian Mellon, a gay man. The cause of his death was that he was at a town fair on his way home, with his boyfriend, Don Hagarty. 3 homophobic teens started harassing them and threw Adrian over a bridge. Pennywise dragged him out of the water, bit into his armpit, and cracked his ribs. People suspected that Eddie Kaspbrak was homosexual because he shared a few similarities with Adrian, one was that Adrian was asthmatic, and when Eddie heard the news of his death, he quickly touched the side of his aspirator. More reasons why many people think he's gay is that It presented to him as a Leper (lately explained by Bill and Richie it's not leprosy, but syphillis).

His mother had also mentioned that two of their neighbors, Phil and Tony Tracker, were "queers" for keeping their house clean, stating it in a disgruntled manner.

As for Richie, the novel is way more subtle while addressing his sexuality, but the subtext is still there. It's shown when Bill is crying after they checked the photographs on Georgie's album and Richie can't even comfort him with a hug without looking around to make sure no one is paying attention.

It is mentioned that Richie and Eddie's relationship is very special, and even when Eddie says he hates when Richie calls him "Eds", he sort of like that too because it was like having secret identities and a way to escape from their parents' fears, hopes and constant demands.

Eddie dies in Richie's arms, right after brushing gently Richie's cheek and telling him to stop calling him Eds.

Richie refuses to leave Eddie's corpse in the sewers after killing IT, saying it's cold and dark and Eddie wouldn't like that, but the rest of the Losers finally convince him to leave Eddie behind as if "it's meant to be that way". He kisses Eddie's cheek before leaving, while the sewers (and all of Derry) starts falling apart.

He's the last one to exit from It's lair, kicking the door shut after crying "Fuck you, Bitch!". Bev asks him why he did that, and the answer is the very iconic quote:

The next day he heads back to California, implying he just wants to forget about everything again.

A good majority of the time when either Richie and Eddie are on screen, they’re interacting with one another.

While Chapter 1 left very clear that Richie and Eddie were best friends and had a very close relationship, it also implied Richie might have romantic feelings for Eddie all this time. This showing in the way he specially messed with him, but also when he pulled him closer and helps him to take a shot from his inhaler when It jumps out of the projector in Bill's garage.

When they all go to Neibolt for the first time, Pennywise uses Eddie's form to call Richie's attention and make him pull away from the group, leading him to a room filled of clown dolls. This meaning Richie's weakness might be Eddie. Later, when Eddie breaks his arm and they all are about to get murdered by Pennywise, Richie tries almost desperately to make Eddie look at him to calm him down and possibly make himself sure they will be the last thing both see before dying, instead of a demonic clown.

After Beverly defeats IT and the Losers leave Neibolt, Richie fights Bill because Eddie nearly got killed, and Bill not only seems not to care about it (from his perspective), but also wants to try again and get everyone killed.

Since the trailers and TV Spots has been released, it's very clear that Richie has a major plot to be developed in the film. We get glimpses of him having a breakdown while holding somebody in the sewers and his young self carving some initials in the Kissing Bridge. Also, there's a leaked video someone recorded from the set where Pennywise is taunting him with:

All of these speculations have been ended by reviews of critics, even more spoilers, and a book, The World of It (to be released on September 6th) as they confirm Richie was actually in love with Eddie the whole time. The book explains Eddie was his first love and, as a way to express his affection to him, he did went to the Kissing Bridge and carved R+E when he was a teenager.

Eddie, like in the book, dies after saving Richie from It, though this time he doesn't lose his arm, but he gets stabbed in the chest, right after he basically crawls to get on top of Richie to tell him he thinks he killed It.

He still dies in his arms and say to Richie his last words, which leaves him totally broken to the point he has to be dragged away from Eddie's body by Mike and Ben, as Richie is clearly willing to die crushed by Neibolt falling apart.

After Eddie's death, Richie returns to the same spot on the Kissing Bridge to honor him, right before leaving Derry forever.

Richie is the kind of guy who is constantly messing with his crush just because he doesn't know how to properly confess his feelings. Besides, he doesn't think there's a minimal chance that Eddie feels the same about him. He can also be annoyingly flirty, this mostly on AUs where they don't know each other and there's no Pennywise,

Eddie would end up almost always too tired to deal with Richie's bullshit, so he'll either make the first move/reject him, depending on the two different headcanons mentioned above. But they always end up being together and in love, as they're basically soulmates.

Even though Eddie dies in every adaptation, there are a lot of AUs where Eddie survives and ends up marrying Richie. 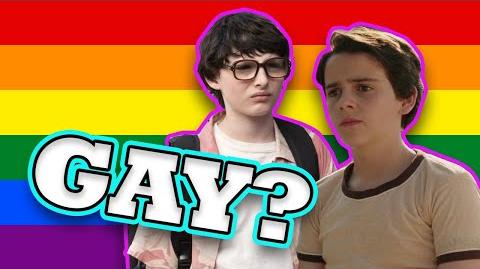 Are They Gay? - Richie Tozier and Eddie Kaspbrak (IT)
Retrieved from "https://shipping.fandom.com/wiki/Reddie?oldid=214899"
Community content is available under CC-BY-SA unless otherwise noted.