• Badass Family — Chris and Claire are both highly skilled in combat. Chris fights against bioterrorism professionally, while Claire works for a human rights agency that provides aid during bioterrorism and medical-related incidents.
• Big Brother Mentor — Chris taught Claire how to defend herself.
• Brother-Sister Team — Particularly in Resident Evil Code: Veronica.
• Promotion to Parent — The Redfield parents died in a freak accident when Claire was 14 and Chris was 20.
• Sibling Yin-Yang — Chris is a serious and dutiful soldier, while Claire is a playful and snarky civilian.

Redfield Siblings is the family ship between Chris Redfield and Claire Redfield from the Resident Evil fandom.

Chris and Claire are six years apart in age, born 1973 (Chris) and 1979 (Claire) respectively. Their parents having died in a car crash when they were young, it is unknown who took care of them after their parents passed away or it can be presumed that Chris raised Claire by himself, this causing the strong bond between the siblings.

Chris taught Claire everything she knows about combat, from hand-to-hand combat to firearms training. It was because of Chris’ training that Claire was able to survive the Raccoon City Incident, being in Raccoon City in the first place to find Chris.

In September of 1998, two months after the events of the Mansion Incident, Claire has been without contact with Chris for the past month, which has her worried. She travels alone to Raccoon City in the hopes of finding him. While riding her motorcycle there, she’s in contact with an unknown person, presumed to be Barry Burton, claiming that she’ll be back as soon as she finds Chris.

In the Claire A scenario, Claire is saved by Lieutenant Marvin Branagh, and he comments, “You’re really Chris’ sister?” Claire confirms yes, asking if he’s found something. Marvin tells her Chris is on “vacation” in Europe and that he “left weeks ago”. Claire is momentarily shocked, before telling him, “That’s… that’s great news.” If the Leon A scenario, Leon Kennedy will ask Claire if she’s found her brother yet, which will lead to Claire sadly telling him no when they next reunite.

In the armory of the police station, Claire can find a note written by Chris addressing his fellow S.T.A.R.S. teammates, claiming that he’s on “vacation,” leading to Claire saying to herself, “That doesn’t sound like Chris…”[1]

In December of 1998, three months after the Raccoon City Incident, Claire is still searching for Chris. Her search takes her to an Umbrella owned facility in Paris where she is discovered and met with resistance. Claire attempts an escape, though is captured by Rodrigo Juan Raval, an Umbrella military commander and is shipped to the remote Rockfort Island facility. Hours later, Claire meets Steve Burnside for a second time that night when Claire finds him hunched over a computer, reading about Chris. Noticing that Claire and Chris share a surname, Steve asks if he’s a “relative of yours or something,” leading to Claire telling him that Chris is her brother. Steve informs her that Chris is under surveillance by Umbrella. With this new information, Claire makes connect with Leon Kennedy, for him to let Chris know that he’s being monitored. Steve makes a lame joke about sending Chris the coordinates instead, with Claire snapping back that she will. Steve tells her that he won’t come, that Claire will just “end up disappointed if you relay on others”. Claire is sure that Chris will come to the island, leading to Steve storming out of the computer room.

When the word from Leon reaches Chris that Claire has been captured by Umbrella, he races against time to reach Rockfort and rescue her from danger. From Albert Wesker, Chris discovers that Claire is at an Umbrella facility located in Antarctica. He’s able to acquire a jet and fly for the base, where he finds Claire unconscious in a replica of the Spencer Mansion. Chris cuts Claire from her encasement and Claire limply falls into her brother’s arms. Sometime later, Claire wakes to Chris watching over her. Upon seeing it’s Chris, Claire immediately launches herself into Chris’ arms, saying how much she’s missed him. Chris begins that they need to leave, though Claire insists that they can’t leave without Steve, whom she got separated from hours prior. Claire stands up, though falls back down seconds later; Chris is by her side in an instant, catching her. Claire believes she’s been poisoned and Chris tells her to hold on, and that he’ll be right back.

Chris returns a short time later, giving Claire what she needs. Claire affectionately punches Chris’ side, telling him he’s “always looking out for his little sister”. The sweet moment is interrupted by Alexia’s catcalling, making the siblings look up at her. Realizing she may know where Steve is, Chris and Claire begin to chase her up the stairs when she disappears behind a door. A large tentacle breaks through the wall, destroying their walkway. Chris falls back to the ground level, injuring his knee. He tells Claire to find Steve, and go on without him. Claire hesitates, before she does run after in Alexia’s direction.

Chris reunites with Claire when he hears her crying from behind a locked door. He asks if Steve’s with her, which only makes Claire cry harder. Softening his voice, Chris asks her if she can unlock the door, which she claims she cannot. Chris slams his body against the door, attempting to break it down. Claire speaks to him, slipping him a security file about activating the base’s self-deduct which might unlock all the doors. This works, as Chris is running back for Claire, Claire is already running for him. The two meet in the middle when Alexia’s tentacle drops her off. The two runs for the linear launcher, unlocking it from its case together. Chris tells Claire he’ll keep Alexia busy in order for Claire to make to the emergency elevator. Claire protects, though Chris doesn’t budge, telling her he’ll “take care of this”. Claire demands that he “make it” and not die on her. Chris runs for the linear launcher after Alexis mutates two more times and is able to kill her. The base is still in self-destruct, and he runs for Claire, finding her being held by Wesker. Wesker pushes her aside with Chris running after them. When Chris reaches them again, he’s met by the same scene. Chris tells him that “he doesn’t want her,” to which Wesker agrees, shoving Claire towards Chris. Wesker has every desire to kill Chris, to which Chris tells Claire to run with the base minutes from being destroyed.

Chris and Wesker fight briefly, until large metal pipes fall between them, ending their fight. Chris runs for the hanger bay, where Claire is waiting. As the base is in its final moment before completely going up, Chris rushes and is propelled on top of their getaway jet, telling Claire he “always keeps his promises”. They fly off as a massive explosion rocks in the distances with Claire asking Chris not to leave her again. Chris tells her he’s sorry, but this isn’t over; Umbrella needs to be destroyed.

Moira Burton complains to Claire about how Barry Burton, her father, bosses her around, to which Claire responds, “My big brother was like that growing up too.”

For Chris during the events of Resident Evil 6, Claire is talking over the phone with someone, assumed to be either Jill Valentine or Barry Burton. Claire asks the caller, “So, [Chris is] in China now?” The caller replies “yes” or some variation of it, to which Claire answers, “Alright. Yeah, well tell Piers to look after him.”

Claire, just coming to – “Chris! I missed you so much.”
Chris – “I know, but we have to get out of here.”
— Resident Evil CODE: Veronica.

Chris – “Feeling better?”
Claire – “Thanks to you. Just like a big brother, huh? You’re always looking out for your little sister.”
— Resident Evil CODE: Veronica.

Claire – “Chris, promise me, please promise me you won’t leave me alone again.”
Chris – “I’m sorry, Claire, but it’s not over yet. There’s something we’ve got to do.”
Claire – “You mean…”
Chris – “Yeah, it’s payback time. We’ve got to destroy Umbrella, now! Let’s finish this once and for all!”
— Resident Evil CODE: Veronica.

Knowing just how strong their bond is and how far they’d go to save each other, Chris and Claire are a beloved relationship within the fandom. 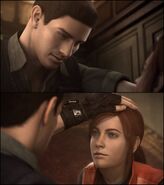