Shipping Wiki
Register
Don't have an account?
Sign In
Advertisement
in: Articles to be rewritten, Ships, Ships/Poly,
and 8 more

ReiBertAni is the poly ship between Reiner Braun, Annie Leonhart and Bertolt Hoover from the Attack on Titan fandom.

Reiner, Annie and Bertolt were all Warriors from Marley, and inherited the Nine Titans; The Armored Titan, The Female Titan and the Colossus Titan. The three, along with Marcel, were sent to Paradis to take back the Founding Titan. After Marcel is eaten by Ymir, Reiner runs away and thinks about how Annie and Bertolt probably got eaten too. This greatly distresses him. When it turns out that the two are still alive, Annie suggests to go back to Marley, due to the death of the Jaw Titan. Reiner declines, and says that they should finish their mission. This causes Annie to kick him and start beating him up, Bertolt watching behind, tears in his eyes as he silently begs them to stop. When Annie is done, and starts to walk away with Bertolt, Reiner stands up and starts choking Annie, saying that he will be Marcel. Annie transforms into her Titan and carries Reiner and Bertolt closer to the Wall. Exhausted, Annie faints and Reiner transforms himself, laying Bertolt on the grass so he can break Wall Maria. When the task is done, Reiner lays Bertolt, Annie in his arms, on top of the Wall and goes to destroy the gate. After, Reiner takes Bertolt and Annie to a safe place, where he puts his arms around the two and apologizes.

During the years, the three stay with a man, and eventually stole his story. While Annie decides to join the Military Police, Reiner and Bertolt go to the Survey Corps. When killing Marco, Annie is seen crying, as Bertolt looks distressed. Marco's death is the reason why Reiner develops a split personality.

Hints of the trio was sprinkled throughout season one. The three of them was always together in one scene. Once was when Mikasa gave a speech how she's stronger than them and that they must fight. They were the ones who was most curious of what just happened when Eren transformed into a titan to protect both Armin and Mikasa. When they heard the familiar noise, they immediately checked what was going on, making Jean confused why they were so curious.

This ship has a good amount of fans, although the poly ships EreMikaAru and JeanSashCon are rivals to them. These three ships are the top polyamorous ships in the community. It has 105 works on AO3 on the romantic side and 167 on the gen one. Since they are part of the "Warriors" unit in the fandom, and given that they're not such a popular trio like the ones in the 104th, fans are very protective of them. After their rough childhoods were shown in the story, this was only reinforced. 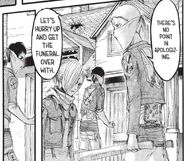 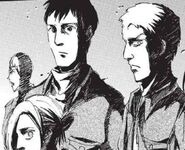 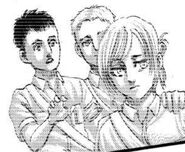 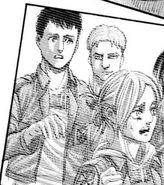