Fanon (films)
Canon (depending on the comic universe)

Natasha – “If it was the other way around, and it was down to me to save your life, and you be honest with me. Would you trust me to do it?”
Steve – “I would now, and I'm always honest.”
— Captain America: The Winter Soldier

Romanogers is the het ship between Steve Rogers and Natasha Romanoff from the Marvel Cinematic Universe and Marvel comics fandoms.

Steve and Natasha first meet during the events of The Avengers on the Helicarrier when they are introduced by Agent Phil Coulson. They worked cohesively as a team defending New York City. There were few interactions between them, while they were fighting or checking up on each other.

Steve and Natasha worked as partners for S.H.I.E.L.D., fighting alongside each other on missions.

On a mission to rescue S.H.I.E.L.D. hostages from pirates on the Lemurian Star, Steve grew angry when he realized Natasha had been given a different mission by Nick Fury to save S.H.I.E.L.D. intel to a USB drive. Fury later gave this USB to Steve after he was shot. Steve hid the USB in a vending machine at the hospital that Fury was rushed to while he went to a meeting with Alexander Pierce at the Triskelion. After escaping the STRIKE ambush, he headed back to the hospital and was shocked to find the USB missing. Natasha appeared behind him and, realizing that she'd taken the USB, pushed her into a side room to angrily confront her.

After a few flirty exchanges, she revealed that she knew that Fury had been "killed" by a man known as the Winter Soldier. The two went on the run from S.H.I.E.L.D. to research the USB. While at a mall to activate the USB at an Apple Store, Natasha spotted several S.H.I.E.L.D. agents and kissed Steve in order to remove their attention from them. The two then teamed up with Sam Wilson, and later Maria Hill and Nick Fury, to take down S.H.I.E.L.D. and Project Insight. After the dissolution of S.H.I.E.L.D., she met up with Steve and Sam at Fury's fake grave to give Steve a file on the Winter Soldier and say good-bye, as she would be disappearing, as she would be disappearing for a while. She gave him a kiss on the cheek and left.

After watching Natasha flirt with Bruce Banner, Steve told him that he's "seen her flirting up close." At Clint's house, Natasha and Steve bantered, Natasha teasing him about his reluctance to cursing. Steve and Natasha fought together in the Battle of Sokovia, and Natasha even wielded his shield at one point. The two came to the mutual agreement that they would not leave the Sokovian civilians behind, even if it meant dying with them. After settling in at the New Avengers Facility, they began training the new Avenger recruits.

Natasha and Steve took opposing sides on the Sokovia Accords, but they kept their friendship. She met him in London at Peggy Carter's funeral to comfort him. In a deleted scene, she even shares information about the answers she went looking for at the end of The Winter Soldier and about her parents. The two fought each other at Leipzig-Halle Airport. When Steve and Bucky made a run for a Quinjet, she shot T'Challa with her Widow's Bites, preventing him from attacking the two from behind and allowing the two to escape. She was forced to go on the run from the United Nations for her actions.

Natasha joined Steve and Sam on the run. They worked together to take down a terrorist organization dealing with Chitauri-fueled weapons in Syria.

Steve, Natasha, and Sam first appeared working as a fluid team, saving Wanda and Vision from Proxima Midnight and Corvus Glaive. The five traveled to the New Avengers Facility, where Rhodey greeted Natasha with a hug. She came face-to-face with Bruce for the first time in several years and greeted him awkwardly. They then traveled to Wakanda and fought together in the ensuing battle against Thanos' forces. She and Steve were one of the only two Avengers to survive Thanos' snap to kill half the universe.

After the five-year-time-jump after the Snap, Natasha is now the leader the Avengers. Steve, now also a grief counselor, walks in after Natasha's meeting with the other Avengers, says he'd offer to make her dinner, but notes that Natasha already made herself a peanut butter sandwich. Steve then tries to comfort her by telling her that he saw more whales in the Hudson. She playfully threatens that if he tries to make her look on the bright side then she'd throw her sandwich at him. Presumably, the two of them have been living at Avengers facility by themselves.

Later in the movie, after Clint reveals to the others that Natasha had died, since she sacrificed herself to get the Soul Stone, Steve cries.

In the Earth-10943 and Earth-555326 universes, after Earth's Mightiest Heroes brought peace all over the world and were finally free to live normal lives, Steve and Natasha decided to live that life together as they fell in love with one another and had a son they named James Rogers. When Ultron attacked, however, both Captain America and Black Widow were killed, along with the other original Avengers, expect for Tony Stark. Before they died, Steve had asked Tony to take his and Natasha's son, along with the Avenger's other children, to a safe location where they can grow up in peace. Tony made sure that their son knows of their legacies and how they died to ensure that he got far away from Ultron's grasps.

“We thought if it got romantic it'd be predictable. We thought it'd be more interesting if we kept them platonic, but developed a deep brother/sister kind of relationship between the two of them where, you know, Cap as a guy with a code and her as a double agent who never has a code, are forced to trust each other and work with each other”
— Joe Russo[2]

“By a series of unfortunate encounters, they will be in a situation in which their friendship becomes more intimate. They share many similarities because they live on the defensive without relying on anyone. Also, the two have been working for the government throughout their professional careers. With their friendship they begin to question what they want and what is their true identity.”
— Scarlett Johansson[4]

“In a way, her head is with Tony’s side of things, but her heart is with Cap in a lot of ways.”
— Anthony Russo[5]

James Rogers is the son of the Marvel comic versions of Captain America and Black Widow, from the Next Avengers universe and timelines, Earth-10943 (comic) and Earth-555326 (animation). After both Steve and Natasha were killed by Ultron and their son was spirited away to a hidden location, James' guardian, Tony Stark, trains him to be the next Caption America and the leader of the Next Avengers. That are the fellow children of the original Avengers, Thor, Black Panther, Giant-Man, Wasp and Hawkeye, as they pick up the mantels that their parents left them. James' fighting style and choice of weapon being a shield reparents his father, while the black color of his jacket stands for his mother. As for James's name, he is named after James Buchanan "Bucky" Barnes.

Fans of the ship like to focus on both versions of it in the film and comic universes, along with other marvel related franchises that features Romanogers-like moments in them. The Earth-10943/Earth-555326 universe having Steve and Natasha as a canon couple with a son, helped to gain the ship a number of supporters, as well as it pleasing Romanogers fans to know that there is a version where the two do get together. Which is why a few fans place James Rogers in their Romanogers fanart.

Some fans like the ship because they are complete opposites, "soldier" and "spy" with very different points of view but they still find friendship and comfort with each other. They are also two people who are out of place and don't feel like they belong because of the past that haunts them. They have the ability to understand each other, comfort each other, yet also complete each other because of the differences they have.

Some theories about the ships include that had Natasha survived, Steve would not go back in time because of how precious she was to him (whether as a friend or something more). 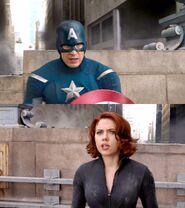 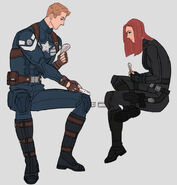 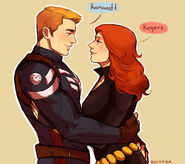 Back to You - Romanogers AU

My Heart Will Go On - ROMANOGERS (Steve Rogers & Natasha Romanoff)

StuckyNat refers to the ship between the two and Bucky Barnes