Rosabara is the femslash ship between Rosaria and Barbara Pegg from the Genshin Impact fandom.

They have interacted with each other multiple times in the canon timeline.

The Chalk Prince and The Dragon

The two are first seen interacting with each other as the Traveler seeks out to find Albedo as they eavesdrop on Barbara and Rosaria. Barbara is seen to be reminding Rosaria about choir practice at the cathedral before Rosaria turns down the invitation, as stated by Rosaria she doesn't do that type of thing. Barbara tries to persuade Rosaria to attend the practice by telling her how the church hoped all the sisters will attend, however Rosaria still refuses to go. Then Rosaria reminds Barbara that isn't she the event organizer and being this far from the cathedral will make her miss the opening ceremony, but then mentions it may be part of someone's plan to make a fool out of Barbara. Barbara rejects Rosaria's implications telling her that people wouldn't do such a thing but Rosaria mentions that the evidence of what people do proves who they are instead of Barbara's feelings, she also tells Barbara that she might be a little too trusting of others.

Rosaria then tells Barbara that she shouldn't worry that she'll be coming back without Rosaria as no one will blame Barbara, also that no one should be that delusional if they think Rosaria will actually attend a choir session. She also tells Barbara that she shouldn't wait or she won't make it in time for the choir practice, Barbara agrees with Rosaria and then bids farewell to Rosaria in a hurry back to the cathedral.

During the festival, Barbara gets a mysterious letter. The letter had stated that they had taken something so precious from Barbara and buried it, she couldn't quite at first think what was most precious to her until she remembers about her older sister, Jean. Barbara hurries out the cathedral with Bennett, Venti, Paimon, and The Traveler where she finds Rosaria. Rosaria tells Barbara to slow down and to remain calm as she saw Jean not too long ago, Barbara quickly asks Rosaria if she was sure if Jean was alright. After Rosaria asks Barbara to show her the letter, as she looks at the map she tells Barbara, Venti, The Traveler, and Paimon where the most precious item was located which was near Dawn Winery.

As Barbara finishes telling the Traveler about the Lost Statue of the Seven and The Tyrant's Final Fury, Paimon thanks her which leads to Rosaria walking in and interrupting the trio. Rosaria tells the Traveler that the Knights of Favonius are busy dealing with monsters, to which Barbara questions "Monsters?". Rosaria explains that they are the same monsters that attacked Mondstadt during the Stormterror incident. Rosaria continues on to say that Jean has headed out already and she will start to move as well. Barbara then says that she should go along as well, to which Rosaria refuses, saying that Jean said that Barbara should stay at the church and continue to work with the clergy. Barbara, disheartened, points out that Rosaria is also a member of the clergy. At this point, the Traveler tells Barbara that they will go too, which calms her down and the deaconess tells them to be careful.

“Barbara is like a thorn in my side, always nagging me about mass and choir practice. I wouldn't be surprised if Sister Victoria specifically asked her to keep an eye on me.”
— Rosaria's Voiceline about Barbara

“Sister Rosaria is hard to get to know, especially given she never joins in on prayers, but... Oh, I'm sure she believes in the Anemo Archon! Although, I still don't really have the courage to try to talk to her...”
— Barbara's Voiceline about Rosaria

This ship has gained more attention due to the Windblume Festival cutscene depicting them. Their first meeting in the Chalk Prince and The Dragon also helps increase this ship's popularity. As the storyline progresses, the ship's fame continues to grow with the multiple interactions in the canon timeline.

Although Rosaria seems apathetic, the fact that she informed Barbara that the other Sisters might be using her shows that, at some level, she does care for the deaconess. A small action yet, for someone as indifferent as Rosaria, it's quite important since she hasn't been seen showing any sort of consideration towards any other characters except Barbara and Traveler.

The contrast between Barbara's devoted belief to the Anemo Archon and Rosaria's skepticism is an interesting dynamic for art to be created and stories to explore more into. Some fans like seeing how Barbara, a faithful follower, would try to interact with Rosaria who dismisses all religious beliefs. The ship's appearance, height difference, opposite personalities are all aspects that cause people to ship the two.

There are currently 72 stories of the two on Ao3. 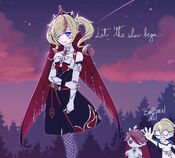 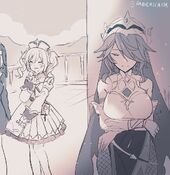 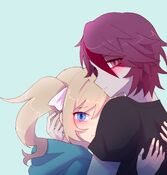 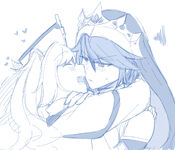