Rose Garden is the het ship between Ruby Rose and Oscar Pine from the RWBY fandom.

When Ruby and Oscar first meet in Volume 5, Chapter 1, Oscar immediately takes note of her silver eyes and appears to be in in awe of them.

In Volume 5 Chapter 3, before Ozpin and Oscar show how they switch body dominants, Oscar shares a brief look with Ruby, who giggles and smiles at him, causing Oscar to blush with embarrassed and dumbfounded opened mouth smile to which he apologizes for his reaction as he never met Huntsman or Huntresses before.

The two are paired together for hand-to-hand combat training and after successfully punching Ruby in the face, Oscar is very apologetic. After Ruby punches him back and knocks him to the ground, she helps him up as well.  When he collapses on the ground after the spar Ruby rushes to his side asking if he is okay.

In Volume 5 Chapter 5, Ruby tells Oscar that he is improving with his combat abilities -noting him to be a natural at it. Through further conversation, Oscar eventually admits to Ruby that he is scared of what bad things will happen next for their mission, and confronts her asking how she can handle the current situation. Ruby confides in him over the loss of her friends Penny Polendina and Pyrrha Nikos, admitting that she is scared too. Despite all odds, Ruby says that she has to keep moving forward, as it would be what Pyrrha and Penny would do if Ruby was the one to lose her life. Before she leaves, Ruby compliments Oscar, telling him that he is braver than he thinks. After she leaves, Ozpin converses with Oscar, noting that Ruby is remarkable and has a "spark" to inspire others. Oscar remarks in admiration that Ruby must have been "one of the best Huntresses at Beacon", which Ozpin confirms.

During the Battle of Haven Oscar takes a moment to observe how everyone else is doing and after noticing that Ruby is knocked out he immediately rushes to her aid, begging her to wake up by saying, "Ruby, get up! Get up!! We need you!".

After Ozpin's backstory is revealed Oscar expresses his fear of becoming just "another one of his lives" to which Ruby is the only one to encourage him by saying "You're your own person."

After everyone reunites with Oscar, who they thought was missing, Ruby shares a small moment with him and compliments his new combat gear her bought while he went shopping. Their share a smile afterwards.

During the fight against Cordovin in her giant robot, Oscar expresses his concern for Ruby several times by calling out her name.

Ruby praises Oscar to the rest of the group and compliments him for successfully flying and crash landing the airship they need to get to Atlas.

After Ruby's decision to lie to Ironwood, Oscar is uncertain if that is the correct action they should be taking. Nevertheless, he trusts and follows Ruby's decision.

Volume 7, Chapter 9 showed Ruby and Oscar encouraging Ironwood to tell the truth together. Coming to the realization that they should do the same they share an awkward moment where they agree to tell Ironwood the truth. They repeatedly spoke over each other and when they both said the same thing simultaneously they laughed awkwardly. Before leaving and going their separate ways, they both stop and turn to each other, once again accidentally speaking over each other. They laugh awkwardly, and Ruby does a finger gun gesture at him with both hands before running out the door towards her transport. Marrow Amin, an Ace Operative, comments "Ugh, kids." in feigned annoyance before following Ruby out the door.[1]

When Oscar is talking to Ironwood, regarding the truth about Salem, he protects Ruby in that conversation by not mentioning that it was initially her decision to keep it from Ironwood and using a collective "we" - showing the groups, and his, responsibility in supporting Ruby's decision.

In chapter 1, Weiss, Ruby and Maria pick up Oscar from down in the crater, from which he fell to after being shot by Ironwood. Oscar laments on his decisions, and being unable to convince Ironwood, to which Ruby tells him that they all did their best and that she is glad that he is alright while putting a hand on his shoulder - an action which causes Oscar to momentarily blush.[2] In chapter 10 when the group is reunited Ruby ran up to Oscar relieved that he was ok. She was presumably about to hug him until she saw Emerald standing next to him. She then immediately got angry and tried to attack her with a very noticeable blush on her face.

Some people started shipping Rose Garden during Volume 4, however, it did not start growing in popularity until their first meeting in Volume 5.

During Volume 5, Oscar remarks that Ruby must have been one of the best huntresses at Beacon Academy, with Ozpin agreeing. Oscar holds Ruby in high regard, and admires and respects her.

During the Battle of Haven, Oscar chooses to go to Ruby's side instead of helping take care of Weiss. Similarly, during the fight against Cordovin, Oscar calls out Ruby's name several times, but never others who are also in danger like Weiss, who was right next to Ruby when Cordovin launched her missiles at them. These moments are seen by fans of the ship as examples of Oscar's attachment to Ruby and affection for her, as he worries about her well-being above everyone else's.

Many Rose Garden fans believe that in Volume 6, Chapter 9 when Oscar is first seen with his new outfit, he is looking in Ruby's direction. This is seen as him being excited to see her reaction and hoping that she will like it.

Their awkward moment in Volume 7, Chapter 9 has fans of the ship excited as it showcases a typical shoujo scenario.[3]

As of Volume 8, it is implied that Oscar's admiration and respect for Ruby has made him develop a crush on Ruby as evidence by him blushing when she merely touches him. This is something he doesn't even do when Nora hugs him.

The complementary color theory that is applied to several other RWBY ships is also applicable to Rosegarden. Additionally, Oscar's new outfit includes dark red elements, that is seen by fans of the ship as him trying to complement Ruby's color scheme. Ruby and Oscar also share a trait of glowing eyes, where Ruby's glow silver due to her silver eye warrior powers, while Oscar's glow gold due to Ozpin's influence. In this sense, Ruby and Oscar are also seen as silver and gold, being the only two main characters in the show whose glowing eyes do not come from maiden powers. 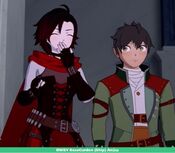 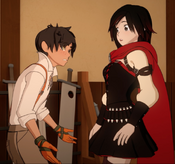