Shipping Wiki
Register
Don't have an account?
Sign In
Advertisement
in: Articles to be rewritten, Ships, Ships/Femslash,
and 6 more

Rougamy is the femslash ship between Rouge and Amy from the Sonic the Hedgehog fandom.

Amy and Rouge's first appearance together is in Sonic Adventure 2, where they started out on opposing sides but teamed up to save the world. No major interactions were shown between the two in that game or Sonic Heroes. The two were featured together in the McDonald's game Amy and Rouge Tennis.

In Sonic Battle, there was a major rivalry between the two; and in the case ofSonic Free Riders, their teams. The two also appeared to dislike each other in Sonic Chronicles: The Dark Brotherhood. However, on other occasions, such as in Shadow the Hedgehog, the two were more friendly towards each other. The two also had a friendly conversation at the end of Sonic Forces. In Sonic Generations, while the two appeared together, they did not interact.

The two had an interaction in the 3DS version of Mario & Sonic at the London 2012 Olympic Games. As Amy, Blaze, Peach, Daisy, and three Toads were trying to figure out the cause of a mysterious pink fog along with countless Blaze and Peach imposters, one of the Toads mentioned seeing a white bat. The group decided to follow the Toad, and encountered Rouge. Rouge revealed that she had plans of trapping the group into the fog and replacing them with imposters, but was willing to let the group go free if one of them defeated her in an Olympic event. Peach accepted the challenge, and beat her in 100m Backstroke. After Rouge lost, it became apparent she was under mind control, and did not remember being threatening. Amy knew there was something suspicious about the way Rouge was acting earlier. After some thinking, Rouge remembered a fog machine, and the girls head to its location, where Blaze destroyed it. Rouge then stayed with the group of girls.

Similarly to some games, the two had a rivalry. The two were involved in a plot against Eggman, who was using the Egg Moon in an attempt to take over the world. Later on, the two participated in the Chaos Emerald Martial Arts Mash-Up, where the two faced in the quarter finals. The two fought fiercely, and Rouge won. After victory, Rouge taunted Amy.

Rouge and Amy had an encounter when the latter was looking for a Sol Emerald along with Cream and Blaze. Amy was distrustful of Rouge and accused her of spying on the group. Blaze told Rouge to either follow their lead or get out of the way, after which Rouge decided to follow the group. The four managed to find the Sol Emerald. Rouge, however, was not helping the group and instead took the Sol Emerald for herself. Amy and Cream quickly demanded Rouge to hand over the Emerald to Blaze. While their teams were rivals for the Emerald for most of the time, they occasionally teamed up to defeat the other rival teams. In the end, Rouge still wanted the Emerald for her mission, but it was her teammate Shadow who convinced that Blaze should keep the Emerald.

During the Shattered World Crisis, Rouge, along with Shadow and Omega, reluctantly joined Amy and Knuckles in a search for Master Emerald shards. After arriving at the Hidden Palace Zone, the team split up, Amy going with Rouge.

During their search, Amy and Rouge were ambushed by a crystallized version of Omega. They were rescued by Shadow, who informed the two that Knuckles was reassembling the Master Emerald with an echidna called Nixus. Amy told Rouge and Shadow that Nixus was actually Walter Naugus in disguise, after which the three went to look for Knuckles. However, they were attacked by Crystal Omega again. The three were able to break Walter's grip on Omega. Naugus had managed to fully restore the Master Emerald and used its power to shield himself while also taking Amy with him. Rouge and the others caught up to Naugus and fought him, as well as kept him away from the Master Emerald. After this, Team Dark parted ways with Knuckles and Amy.

The two interacted during the chao races arc, taking care of Cream the Rabbit (sometimes acting like parental figures to her). They appear friendly with one another, although clashing in methods sometimes. This continues into the Camping arc, where they drive together on the way to the camp, and in the same camping area. They both helped put out the forest fires.

Rougamy is one of the most popular femslash ships in the Sonic fandom, at least for Rouge, but less popular than Blazamy. It parallels Sonadow as the characters in both ships are rivals, and involve characters from the mainstream pairings Sonamy and Shadouge. However, Sonadow is notably more popular than Rougamy.

On AO3, Amy/Rouge fanworks often involve Shadow/Sonic as well. On the website, Amy/Rouge is the third most popular romantic ship for Rouge, behind Knuckles/Rouge and Rouge/Shadow. 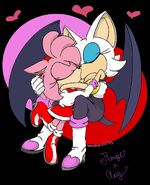