Only you would be bold enough to bring up wanting to try doing something no one's ever done before, Tsukasa-kun. And that's why you're so wonderful!
—Rui in "Mascot Greeting" first side story

RuiKasa is the slash ship between Rui Kamishiro and Tsukasa Tenma from the Project SEKAI fandom.

Rui and Tenma Tsukasa are second-year high school students and members of the theater troupe Wonderlands x Showtime. They are the "well known duo of weirdos" at their school, due to the fact they cause ruckus around the campus daily, most of the time due to Rui's experiments.

Tsukasa and Rui first meet during their unit's Main Story. Their first interaction is Tsukasa seeing Rui and talking of how he would be a perfect fit for the performance troupe (consisting of Tenma Tsukasa and Ootori Emu at the time, soon to also have Kusanagi Nene and the aforementioned Kamishiro Rui). It took little convincing for Kamishiro to join the troupe, thus marking the start of their canonical relationship - friends/performers.

Through the story, there are not many stand out moments between the two. However, it is brought up time and again in the Main Story via Rui's teasing that they are a dynamic duo when it comes to performance. Tsukasa is always being pushed to his limits by his director because, according to Rui, "he is an actor worthy of the stage" and can always go the extra mile.

The most notable development of their relationship is in Chapter 13 of their group's Main Story. On the night of their very first performance - which had failed due to technical difficulties - Tsukasa blew up regarding how it was Nene's fault the performance went wrong. Rui, being close friends with Nene, didn't stand for this. Due to this reason, Rui harshly critiqued Tsukasa, deducting him to be nothing more than a shallow narcissist, seeing the shows they perform together more as a means for popularity than anything else. This feud is soon reconciled, after the majority of the troupe is back together, and Tsukasa has admitted his mistakes to the show director. Rui's reaction is simply to laugh and accept to join, highlighting Rui's value of forgiving, and Tsukasa's little mentioned ability to truly apologize.

The chemistry they have in idle interactions alongside the chemistry they have in story is what spurs the fandom on. Most of the time, Tsukasa and Rui seem to bounce off of each other in conversation, creating an almost performance like dialogue. Other times, Tsukasa and Rui tend to click ideas together in a way that makes them both engaged in the conversation, which creates a fluid, exciting conversation to view. Another such way they interact is how Rui continuously pushes Tsukasa to be the best he can be in performances, always giving him taxing stage directions.

One such example is in the "It's On! Wonder Halloween!" event, wherein Tsukasa is given the instructions to a lengthy, physically taxing performance that he gladly accepts and performs excellently. The event also highlights the two's care for each other, with Rui being out of his normal headspace and concerned after Tsukasa is knocked out due to a technical malfunction. It brings up the mutual trust, concern and respect they both have for one another through the lens of Rui trusting Tsukasa to perform excellent feats, being concerned for his wellbeing despite this, and respecting his wishes to continue, as well as Tsukasa trusting Rui with directing the show, being concerned for his mental wellbeing despite this, and respecting his personal boundaries.

In the current canon, it is generally noted that Rui sees Tsukasa as an actor worthy of a stage, being comfortably confident in giving him often taxing and generally dangerous stage directions with the knowledge he can handle it. This is mirrored in how Tsukasa sees Rui - "awesome but crazy."

In the "Kamiyama High Festival!" Event, Rui was Tsukasa’s partner while rehearsing the proposal part of Romeo and Juliet for their play. Tsukasa played the part of Romeo, saying "O Juliet! Sun of my life! I beg you, allow me to have your hand in marriage!!" and Rui played the part of Juliet, responding "Romeo... Then refuse your name and I shall swear my love!" Tsukasa closes the scene, saying "Sweet Juliet...!" This scene could be seen in KAITO’s Secret Guidance card, where Tsukasa could be seen kneeling on one knee while extending a hand to Rui who is in the corner of the frame.

On the special lines of Tsukasa’s birthday, It is stated that Rui made a celebratory cannon filled with confetti, the dialogue being: "Tsukasa-kun, look! All of the confetti flew up so high. Now, if they manage to spread out beautifully, this will be a huge success!" To which, Tsukasa’s response was "Ooh! The celebratory cannon made by Rui is amazing! It looks like as the whole school is covered in a flurry of confetti!" This is also confirmed by Nene and Emu, both mentioning the huge cannon.

Ruikasa is widely considered to be the most well-known and most shipped slash ship in the fandom. The ship is supported mainly due to the pair's natural chemistry. It is the most written ship on AO3, and the ship with most works on Pixiv as well. It is mainly rivaled by the other slash ships, although some also ship the four guys together as the poly ship Fantasista Squad. Ruikasa are sometimes shipped alongside Emunene. 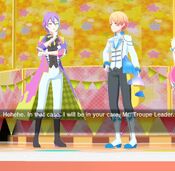 RuiKasa in once upon a dream

Ruikasa with KAITO in 88☆彡