Enemies; Rui is deceased (pre-timeskip)
Both are dead (post-timeskip)

RuiTan is the slash ship between Tanjiro Kamado and Rui from the Demon Slayer fandom.

Rui was one of the demons who served under Muzan, being lower rank five. Tanjiro first encounters Rui upon hearing screams and pleading, which is later revealed belonged to the Spider Demon Sister, whom was getting struck by Rui. Tanjiro is left confused at the scene and wonders if they are fighting on the same side. However, Rui dismisses Tanjiro's concerns and threatens to carve him up if he interferes. Determined, Tanjiro declares the bond between Rui and his "family" forged and a lie. This enrages Rui and is engaged with a combat against him using his threads. During the battle, Tanjiro had learned to detect Rui's threads, making the latter note Tanjiro being smarter than he had expected, though it did not stop him from shrinking back.

When Tanjiro refused to take back what he said about Rui's forged bonds, Rui decides to put the matter to an end by caging Tanjiro in his webs to kill him, until Nezuko frees herself and protects Tanjiro from the webs, subsequently harming her. This sibling bond astonishes Rui and immediately becomes obsessed with keeping Nezuko as his big sister. At this, Rui states he wishes to simply talk to Tanjiro upon witnessing what Nezuko did for her brother. He further declares that if Tanjiro gives up Nezuko, he will spare Tanjiro of his life. Tanjiro is outraged by this, as he confronts Rui that he won't hand over his sister and will try to defeat him. This amuzes Rui, before he reveals himself to be part of the Kizuki.

Tanjiro still does not back down. With his patience limited, Rui decides to take Nezuko from Tanjiro by force using his threads. When Tanjiro evades from Rui's strikes, he realizes Nezuko is gone from Rui's grip, revealing she has been strung up. Tanjiro attacks but is detered by Rui's threads. Instead of utilizing his threads, Rui begins to kick and backfist Tanjiro respectively, showing immense strength. Confident, Rui challenges Tanjiro to behead him, although he is unable to sever his neck since his skin is stronger than his threads. Once again, Tanjiro attacks, using his Water Breathing technique to break Rui's threads. Threatned, Rui maximizes his threads to much greater strengh and traps Tanjiro, introducing his Cutting Thread Cage.

In a moment of near-death, Tanjiro unleashes the Hinokami Dance and is able to pose a match against Rui. Together with Nezuko's Exploding Blood, Tanjiro was able to sever Rui's head. However, Rui is revealed to be alive, mentioning his severed his head using his threads to save his own life. Having being enraged since years, he decides to take both Tanjiro and Nezuko's lives. Rui nearly eviscerates Tanjiro until Giyuu shows up and frees Tanjiro. Rui is irritated and proceeds to use Cutting Thread Rotation against Giyu, though Giyu responds with the Eleventh Water Breathing form. Rui is shocked and in a state of confusion, proceeding to try again, but finds himself beheaded by Giyu.

As Rui dies, Tanjiro sees he is grieving and cries. He places a hand on the disintegrating body to comfort him, giving Rui a nice sense of warmth before his spirit passes on to the afterlife.

RuiTan is most notable on Rui's side given the bittersweet ending between him and Tanjiro in canon. Stories on AO3 consist of Rui taking Tanjiro as his lover for his "family" either in a romantic or sadistic sense, or an alternate universe in which Tanjiro instead wants to save demons, thus helping and including Rui as one of his friends in Rui's redemption arc.

Because Rui only appeared for an arc and had limited screen-time, RuiTan is relatively unpopular in the Demon Slayer fandom. Some people dislike how their relationship would be toxic, others find it heartwarming. Regardless, there is a good amount of fans that love the ship.

Rui/Tanjiro Kamado tag on AO3
"A True Bond" by Crunchyrice 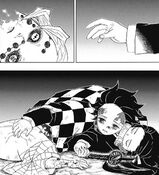