Best friends/Comrades; Sabito is dead (Pre-Timeskip)
Both are reincarnated (Post-Timeskip)

SabiGiyuu is the slash ship between Giyu Tomioka and Sabito from the Demon Slayer fandom.

Sabito and Giyuu met years before the start of the series as apprentices of Urokodaki, the former Water Pillar. They were good friends and bonded well due to their similar past and motivations.

Originally, the pair along with Makomo were supposed to pass the Final Selection and become demon slayers together. However, things went horribly wrong when Sabito was forced to protect his friends and other participants from demons, exhausting himself and subsequently killed by the Hand Demon due to this exhaustion. Giyuu made it out of Final Selection by luck, as he had passed out during the Exam and only made it out because of Sabito, he felt so guilty to the point where he diminished his own self-worth, feeling that he was unworthy of his place as the Water Pillar and that Sabito was better than him.

Giyuu never had the thought that he should be better off dead, because he respected his friend's vow that if Giyuu ever said that, their friendship would be over. He kept their vow/promise going even after Sabito's death. For an unclear reason - whether to remember Sabito or as a reminder to why he lives - the left side of Giyuu's haori is reminiscent of Sabito's, likely symbolizing that losing Sabito was essentially losing half of himself to Giyuu.

In the final chapter of the manga (modern time), Giyuu is seen with both Makomo and Sabito, who all bear different names due to the fact that they've reincarnated. Current Giyuu praises Sabito, otherwise known as Zaichi-kun, for getting a rare toy character while Makomo expresses jealousy. The three appear to be as young as elementary school kids. Giyuu's new self seems lighter and happier, right next to Sabito's.

“Don't say that you'd be better off dying ever again. If you do, you and I are done. We'll stop being friends.”
— Sabito to Giyuu.

SabiGiyuu is one of the most popular Giyuu ships, and the rival ship of GiyuShino. A lot of fans saw their friendship as a special relationship where both of them held deep feelings for the other, romantic or not, but very caring, kind and with mutual growth. It is also sometimes shipped along with MakoShino

Many fans theorize that Giyuu's dead eyes and cold attitude is a result of his grief for Sabito's death, as it is seen in his flashbacks that his personality was used to be a lot more open prior to losing Sabito, most notably that the "light" in his eyes disappeared.

Due to Sabito's death, this ship is usually followed by a great amount of angst, usually revolving around Giyuu's feelings toward him or the aforementioned boy's death. Some people, however, prefer to draw and write about them in happier situations/AU's where Sabito lives.

SabiGiyuu is Giyuu's third most written ship under their tag in AO3. 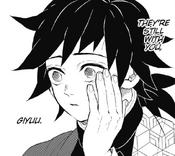