Saiibo is the slash ship between K1-B0 and Shuichi Saihara from the Danganronpa fandom.

At first, Shuichi thought K1-B0 was one of Monokuma's relative which he declined, however. Shuichi was surprised how K1-B0 was a robot and also their classmate.

In general, Shuichi appears to be nicer towards K1-B0 than most of the other students, but he still does occasionally say "robophobic" things that anger K1-B0. K1-B0 appeared especially offended and angered when he was kicked out of the seance and replaced with Shuichi, blaming the detective and telling him that he won't forget this. However, Shuichi does sometimes encourage K1-B0 by telling him that he's fine the way he is, but he also feels a bit awkward whenever the robot shows off his rather unimpressive functions.

During the Bonus Mode, in the Love Suite, K1-B0 wonders about the meaning of love and asks Shuichi to be his lover so he can learn about those emotions. The robot goes overboard with listing typical things lovers do together and Shuichi calms him down by saying that maybe they shouldn't be in a relationship if K1-B0 doesn't truly like him. K1-B0 turns unhappy and assumes he was rejected, but Shuichi tells him it's not like that. K1-B0 then confesses that he might have fallen in love with Shuichi and wishes to exchange warm words and hold hands with him. They both feel nervous, but decide to hold hands, which makes them feel calmer.

If K1-B0 has a good time with Shuichi during the bonus mode Love Across the Universe, he wouldn't like to go back to the dorm and wishes to spend more time with Shuichi. He then explains while blushing shyly that his chest feels warmer when he is with Shuichi and he feels very calm.

The ship sailed as a result of Shuichi being the main protagonist of New Danganronpa V3: Killing Harmony and K1-B0 being the protagonist in-universe, for the audience of the game. Their interactions in bonus modes also helped to fuel the ship more. While the ship has a considerable number of fanfictions on Archive of Our Own, it's still less popular than certain other ships involving the two, such as Kiiruma or Saimatsu. 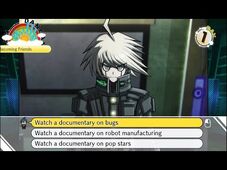