Saimaki is the het ship between Shuichi Saihara and Maki Harukawa from the Danganronpa fandom.

Shuichi and Maki got along well after the events of Chapter 2, after Kaito Momota brought Maki to their training regime. This resulted in the three doing exercises together, although Maki outmatched the two boys at everything they did. Shuichi seemed impressed with Maki's skills, and the three began to meet up nightly to do these exercises. As the two grew closer, Maki began to feel more comfortable around Shuichi, although she still had some trouble trusting others. Despite her cold and rather intimidating demeanor, Shuichi is one of the students who trusts Maki despite her status as an assassin.

Although Shuichi initially only trusted Maki because of Kaito, he grows to genuinely care for and believe in her. In Chapter 3, when Maki confides in him about her not feeling "human", Shuichi assured her that he can relate, as he has his own insecurities about his work as a detective. Because of this, Shuichi strongly supported Kaito's decision to take down Maki's "mask", as he believed he is the only one who can help her open up.

During murders, Maki often reminds Shuichi to "get a grip" as he is the detective. She even assisted Shuichi during Chapter 3's investigation, helping him creating hypotheses and finding clues. When on the discussion of Tenko's last moments, Shuichi and Maki work together to lie about Tenko Chabashira dying instantly, so she wouldn't be able to kill herself inside the cage, despite Maki being the one who suggested this method in the first place. Shuichi told Maki that she helped him a lot with the investigation, although Maki only said that she found him surprisingly reliable during the investigation.

During the events of the virtual world in Chapter 4, Maki did make a point to remind Shuichi that he's a person before he's a detective, which he's touched by, despite her telling him he's more reliable during a murder case than daily life. Nonetheless, it's apparent the two have grown quite close to each other, with her asking if he's okay, making sure if he and Kaito aren't fighting when Shuichi forcibly logged him out to test something.

In Chapter 5, their relationship is slightly strained after Kokichi captured Kaito. When Maki attempted to save him, Shuichi held her back out of fear for her safety, claiming he did't care if she is upset with his decision, or even wanted to kill him. Although Maki backs down, she angrily calls him a coward, to Shuichi's dismay. During the fifth trial, she repeatedly attempts to steer the crime into her own fault, threatening and insulting Shuichi when said Kaito was the one who survived, claiming that he was getting in her way to defeat Kokichi Ouma. Shuichi was visibly saddened by the fact that Maki did not share his belief in Kaito's survival, as he thought she would be take his side on the matter. Despite this, he still strongly wanted to believe in Maki when it started to appear as if she was the culprit, and appeared relieved when Maki's testimony turned out to be flawed, proving she was not Kaito's killer. However, the two came to a disagreement again after Shuichi suggested Kaito murdered Kokichi, until Kaito came out and confirmed Shuichi's story.

After Kaito's execution in Chapter 5, Maki and Shuichi went to their normal training spot and had a short, but emotional conversation about the events that had transpired, seemingly putting their previous falling out behind them and mending their friendship. Joined by Tsumugi Shirogane and Himiko Yumeno, they trained together and mourned Kaito. Shuichi and Maki then resolve to put an end to the Killing Game together along with everyone else.

During Chapter 6, Shuichi and Maki rely on one another as they investigate the school together. Shuichi expressed happiness at the fact that he and Maki have reached the point where he can tell that she's joking. During the last trial, it was partially because of Maki and K1-B0's offer to sacrifice herself that inspired Shuichi to abandon his vote, as he admitted the thought of Maki dying scared him due to what happened to Kaede and Kaito. Shuichi gave Maki courage to end the Killing Game, which resulted in her abandoning her vote as well. The two, along with Himiko, later survived together, escaping to the outside world.

During the Love Suite Event, Shuichi had the role of a kid from the same orphanage of Maki. Maki says that despite Shuichi and her being together for 10 years, she still didn't understand him. Shuichi is confused and Maki explains that he came to the orphanage a little before he entered elementary school. Shuichi agrees absentmindedly. Maki then again says that she really doesn't know everything about Shuichi. He then asks her what makes her think she doesn't know everything about him. She then blushes and Shuichi is confused at this. Maki says that Shuichi before used to play house with the other kids and it became difficult for her. She then asks Shuichi when he wanted to make a real family with her instead of a pretend one. Maki then goes silent and Shuichi asks whats wrong. Maki then gently held Shuichi's hand and says that she knew something was strange. Maki says that she wants to create a real family with Shuichi and not a fake one. Maki then asks Shuichi to promise her that he'll stay with her. Shuichi then nods his head as his answer.

The ship sailed as a result of the close friendship between the two that starts being developed thanks to Kaito in Chapter 3. Both losing their respective love interests during the killing game also helped. So did their trainings together. Due to Kaito also training and having close friendships with both of them, they're sometimes shipped in a polyship including him. 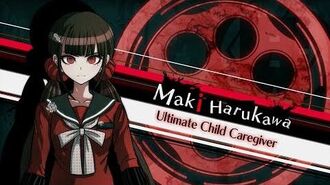 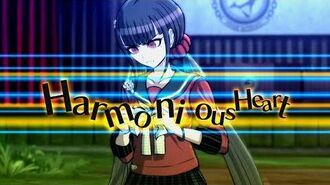 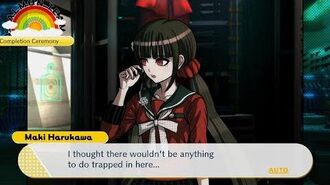 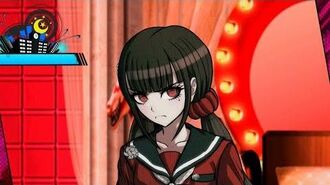 Retrieved from "https://shipping.fandom.com/wiki/Saimaki?oldid=237512"
Community content is available under CC-BY-SA unless otherwise noted.