Saimeno is the het ship between Shuichi Saihara and Himiko Yumeno from the Danganronpa fandom.

Shuichi and Himiko are the two of three final survivors in the killing game from Danganronpa V3 (the third being Maki Harukawa). They seem to be friends, as they're supporting and are nice to each other, although they were never shown to interact in the romantic way, so their relationship is canonically platonic.

Despite being fellow survivors of the Killing School Semester, the two rarely interact in the main story. This is because Shuichi mostly hangs out with Kaede, Kaito, and Maki, whereas Himiko mostly hangs out with Angie and Tenko. In Chapter 4, Himiko, along with everyone else, mistakes Shuichi for a masochist due to taking orders from Kaito, and a loner while he was investigating the maps. However, much like everyone else, she knows she can rely on Shuichi at the Class Trials, which she expresses before the trial of the same chapter. In the last chapter, the two work together, along with K1-B0, Maki, and initially Tsumugi, to end the killing game. In the Epilogue, Shuichi helps Himiko get out of debris left after the academy's destruction.

In their Free Time Events, the two mostly talk about magic, with Himiko constantly telling Shuichi that her magic is real. Shuichi comforts Himiko about the disappearance of her mentor, telling her that after his failure he went to train his magic tricks in order to be able to perform with her again.

The ship sailed as a result of some fans wanting to pair the surviving characters together, especially since there were so few of them this time. Both going through the loss of someone important to them has also helped. However, with Saimaki sharing the same traits and having more friendly interactions together, this one is less popular than the former. Sometimes they're shipped together as the Surviving Trio.

However, this ship still loses in popularity to both characters' main ships, such as Saimatsu or Tenmiko. The primary reason, aside from the limited number of interactions between the two, appears to be Himiko's lolita design, which makes some fans uncomfortable to ship the two together despite them being the same age. 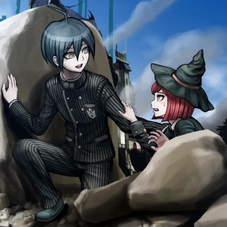