Saimota is the slash ship between Kaito Momota and Shuichi Saihara from the Danganronpa fandom.

Kaito quickly becomes Shuichi's closest companion following Kaede Akamatsu's demise, and they come to share a close bond. After Kaede was executed in the first trial, Kaito states how Shuichi pisses him off the most and immediately punched him in the face, saying that he's angry Shuichi didn't do anything to stand up to Monokuma, and that it was disrespectful to Kaede's memory to sit there and do nothing.

The morning after, he visits Shuichi's dorm to apologize for yelling and punching at him, and tells him that he's there to take Shuichi to breakfast. It was shown that Kaito visits Shuichi often and invites him to hang out with him, and makes him his "sidekick". They investigate together and help one another, Kaito saying that if Shuichi needs support, he'll always be around to help him. When Shuichi's stuck with clues in the Class Trial or feeling unconfident in his abilities, Kaito helps Shuichi by motivating him and staying on his side. In the original Japanese version, Kaito started to call Shuichi by his first name, while calling him "bro" in the English version, proving that the two shared a close bond.

Shuichi was greatly saddened to discover that Kaito was the one who killed Kokichi Oma in Chapter 5. Kaito told Shuichi that he was, actually, jealous of Shuichi for his deduction abilities. Because of his reasoning, they were able to stay alive, passing many Class Trials. Kaito made him promise not to cry, however, Shuichi had immense difficulty following through on this. When asked by Maki Harukawa if he was lonely with Kaito gone, Shuichi confirmed this and admits that Kaito is the only reason why he is still alive. He was once again motivated by the death of another friend and was determined to keep moving forward. Many of Shuichi's happy memories during the killing game were shown to involve Kaito, showing that he still remembered him as a close friend and companion.

In general, Shuichi greatly admires Kaito for his honesty and helpfulness, though he does recognize his sillier moments. According to Shuichi, he has never been around someone like Kaito, and he says that his own insecurities and anxiety fade away in his company. He thinks it might be what he has been missing all this time and that "only someone like Kaito could tell him what he needs to hear", this can be interpreted however the player wants, but the idea of it shows that he may have some kind of feeling towards Kaito. During Kaito's Free Time Events, Shuichi even gets a bit flustered by his own thoughts and feelings towards Kaito, considering that he's a boy. During the Love Suite Event, he also gets flustered when Kaito corners him against the wall, and thinks it's hard to stay calm with Kaito so close to him in such a place. In Chapter 4, when the other students agree that Shuichi is a masochist, Maki points out seriously that Shuichi always looks so pleased whenever Kaito gives him orders and appears happy as the sidekick, and that he might just be into that sort of thing.[1] In Kaito's free time events, Shuichi and Kaito are speaking, and something comes up about the fact that Shuichi should not be thinking about another male like that, implying he has feelings for Kaito.

The ship sailed as a result of the close friendship between the two. Fan fictions often tend to portray them as more than best friends. Some also include their canonical implied love interests, Kaede Akamatsu and Maki Harukawa, in a polyship with them.

Its main ship rivals are Saimatsu, Harukaito, Saiouma and Oumota. However, they're also often included as polyships by the fans who are unable to choose between them or like them all equally. 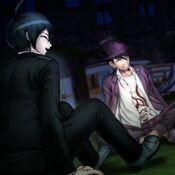 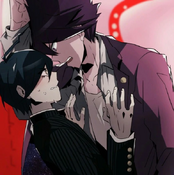 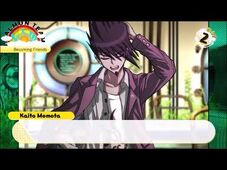