• Enemies to Lovers
• Lookalike Lovers
• Not So Different

Saimugi is the het ship between Shuichi Saihara and Tsumugi Shirogane from the Danganronpa fandom.

However, when Tsumugi was revealed as the mastermind during Chapter 6, Shuichi became enraged and horrified that one of his friends was behind the entire killing game. Saihara became increasingly upset when the plan behind Chapter 1's murder was revealed, having Shuichi now know that Kaede Akamatsu was wrongly executed.

Later in Chapter 6, Tsumugi tells Shuichi, Maki, K1-B0, and Himiko that their entire personalities, feelings, backstory, and talent were all fabricated for the sake of Danganronpa. The students start to enter a depressive state, but K1-B0 convinces Shuichi to not loose hope, and Shuichi along with Himiko and Maki, leave the academy.

In her Free Time Events, Tsumugi tells Shuichi about the world of cosplay, and how much work goes into it. Tsumugi believes Shuichi is interested in her job, and urges him to try one of her cosplays on. Somewhere in one of their conversations, Tsumugi brings up the White Katana, Shuichi's favorite hero. Saihara agrees to cosplay as the White Katana, and Tsumugi is so excited she flails the detective's hand up and down, but blushes when she realizes they are holding hands.

In the non canonical Love Hotel. Shuichi plays the role as Tsumugi's step-brother. In her fantasy, Tsumugi has incestuous feelings for her step-brother, Shuichi. However he is extremely disturbed and appalled by the idea. But with further influence by Tsumugi, Shuichi agrees to the idea of being her lover. It's implied afterwards the two had a sexual intercourse afterwards. Tsumugi also gives Shuichi the nickname "Sweetchi" in the Love Hotel event,

Fans have mainly taken a liking to this ship as a result of Tsumugi's Free Time Events. However with the reveal of Tsumugi as the mastermind in chapter 6, many have abandoned the ship. Though, some still continue to ship it.

Some fans of the ship theorize that Tsumugi was lying about everything being a part of fiction, and she deeply cared for all of her classmates.

Rival ships include Shiromami, Kaemugi, Saimatsu, Saiouma, and Saimota. Because of Shuichi and Tsumugi's limited interactions aside from the optional Free Time Events, and Tsumugi's role as the mastermind, this ship loses in popularity to each of them. 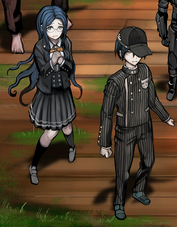 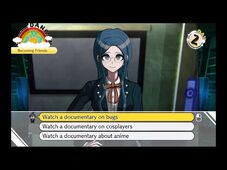