Friends; Angie is dead
One-sided attraction on Angie's side (Free Time Events/Love Across the Universe)

Sainaga is a het ship between Shuichi Saihara and Angie Yonaga from the Danganronpa fandom.

The two rarely interact in canon. When Shuichi takes off his hat in Chapter 2, Angie tells him that he looks very handsome without it. However, in Chapter 3, Angie doesn't invite Shuichi to her Student Council, likely because she knows he wouldn't give up on finding out the truth behind the killing game. Although he's on the opposite side, Shuichi wants a peaceful resolution to the group's conflict.

Their first Free Time Event is quite neutral, with Angie telling Shuichi more about Atua depending on what option the player picks. Their second Free Time Event shows that Angie is happy that Shuichi is so charmed by her artwork. In their fourth Free Time Event, Shuichi decides to apologise to Angie for shouting at her, but Angie has already forgiven him and allows him to hang out with her. Angie talks more about Atua, and Shuichi gets lost into thought for a while, but is snapped out of his thought train by Angie. When Shuichi says that Angie is too close, she responds with "Cause I want you to focus on me. Wow! I can see myself in your eyes!." When Shuichi repeats that she's too close, she responds with "I don't mind. I want to be closer to you. Nyahaha! There, now you're closer to me." Shuichi being visibly uncomfortable, responds with "I don't mind being *emotionally* closer to you, but can you scoot back a bit!?" With that, their fourth Free Time Event ends.

In their fifth and last Free Time Event, Angie is obviously eager to see Shuichi, and gives him a small board wrapped in plastic. She then tells Shuichi to unwrap the cloth, revealing a painting. Shuichi asks Angie what the painting is of. She answers that it is his face, and then tells him to keep it. Afterwards, she says "Yay! I'm so happy I've gotten closer with you." Then, "And now, you're ready to be Angie's husband. Isn't it wonderful?" , which follows by: "Atua has spoken... Shuichi can be with Angie forever." Shuichi questions if Atua decides everything for her, which she ambiguously responds with "Hm? Well... Maybe I want you to be my husband... Cuz I really do wanna be with you forever... Does this mean I chose you, not Atua?" The first option which the player can pick: 'Are you confessing your love?' to which Angie responds with "Ohhhh, I see, I see! Is that all? You just wanna know if I like you, too? Okay, I do! There, it's decided!" Option two: 'This is getting kind of heavy...' Angie thinks he's talking about her weight, but then he tells her that picking a groom is a very important decision. And, the final option: 'I can't do it!' Angie tells him not to defy Atua, which he then asks Angie "And why did you pick me? I'm just an ordinary guy compared to you." Angie tells him that he's not ordinary, which then follows by "You're the first one to ever get angry at me. Since that moment... I haven't been able to stop thinking about you... I just think about you all the time." Shuichi believes that these are Angie's feelings, and not Atua's. Then she repeats herself: "Hey, Shuichi? Will you be my husband and stay with me forever?" Shuichi then thinks that it is too early for them to marry.

In her Love Across the Universe ending, Angie tells Shuichi that he promised they'd leave the academy, move to Angie's island, get married, and have a family together. Shuichi requests getting to know each other more before they'd make such decision. Angie stays silent for a bit, then says that Atua will be watching both of them closely and they've gotten his consent and blessing.

During their Love Suite Event, both of them are on Angie's home island, and Angie is hanging out with Shuichi because she wants to play a game with him. When Shuichi asks what game it is, she comments that Shuichi can be so forgetful, but she likes that he's so compliant with what she wants him to do. She explains that when a 'low-rank' doesn't amuse a 'high-rank', the 'low rank' gets their points deducted, which follows with her unpredictably pouncing on Shuichi, resulting iny both of them collapsing onto the bed. Angie is found happily straddling Shuichi's thigh. When Shuichi tells her to get off, Angie responds that he isn't supposed to tell a high-rank what to do, and tells him she will carry out Atua's punishment for that. Angie leans forwards, and places her fingers on his neck. Shuichi, clearly surprised, slightly yelps. Angie asks if Shuichi likes that, but before he can answer, she answers her own question by saying that Shuichi does like it, since Atua told her so. As her fingers go lower and lower, Shuichi is clearly panicking, but feels too helpless to throw her off, as her fingers go near his unmentionables. However, Angie then tells Shuichi that his punishment is over. To his disappointment, Angie tells him that it's his turn, and tells him to make sure she 'has fun' and that they will play this game until 'sweaty salvation'.

Fans mainly ship Sainaga because of their last Free Time Event. This ship is possibly liked due to awkward interactions and how Angie anticipates a future of the two in multiple modes. It is quite small, and is overshadowed by more famous ships, such as Saimatsu and Saiouma. 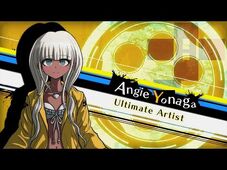 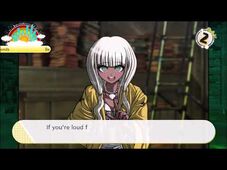 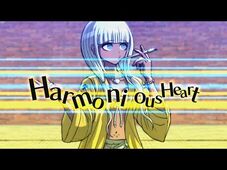 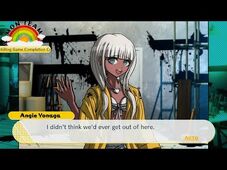 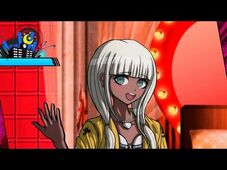