• Masculine, Feminine, Androgyne Trio — Appearance-wise, Kaede is feminine, Kokichi is a little more masculine, whereas Shuichi is easy to mistake as a girl, especially when playing the game using the Japanese voices, thus making him somewhat androgynous.
• Two Guys and a Girl — Kaede is a female while Shuichi and Kokichi are males.
• Power Trio — Kaede was the first main protagonist to be introduced in the game followed by Shuichi being the second main protagonist after her death while Kokichi is known to be Shuichi's rival during the class trials.

Saioumatsu is the poly ship between Shuichi Saihara, Kokichi Oma and Kaede Akamatsu from the Danganronpa fandom.

You first meet the two male characters whilst playing as Kaede. Shuichi was the first to wake up with our protagonist, thus immediately becoming the token deuteragonist supporting her. After Kaede snapped Shuichi out of his state of panic, the two had a brief discussion on where they could be after waking up in the classroom, introducing themselves to each other as "ordinary students" before they're interrupted by an Exisal breaking into their classroom and chasing them to the gym, where Shuichi leads Kaede to.

After the duo get their memories, they're transported back to the same classroom and are forced to re-do their introduction sequence, this time introducing themselves to each other as the Ultimate Pianist and the Ultimate Detective for Kaede and Shuichi respectively. The two follow each other and meet all of the other characters together, one of said character's being Kokichi Oma, who immediately sparks both Shuichi and Kaede's interests due to his mischievous and eccentric behaviour after introducing himself to the two as the Ultimate Supreme Leader, one of which who runs an evil secret organization with over 10,000 members, before immediately claiming himself to be a liar and that the whole "10,000 members" thing mightn't be true. Kaede and Shuichi question Kokichi on this matter, but he isn't very responsive.

Further into Chapter 1, Gonta announces he remembered he found a manhole in the boiler room behind the school and all 16 of the trapped students follow him. After he lifts the manhole cover off with ease, the group go down and discover the Death Road of Despair. Kaede, determined to escape the Killing School Semester before it starts, convinces everyone to try it. After several failed attempts, Kokichi gets angry at Kaede and blames her for the groups agony, as everyone around her, including Shuichi, are mentally and physically drained.

More into Chapter 1, Shuichi finds a hidden passageway in the library and informs Kaede about it. The two investigate it together and come up with the idea that maybe one of the students inside the academy with them is the Mastermind of the killing game, prompting Kaede to come up with a plan to kill said mastermind in order to help everyone escape. While waiting for their plan to come together, the two share a heartwarming moment as Kaede comforts Shuichi with her hand on his.

During Chapter 1's Class Trial, Kaede protects Shuichi and lies for him when he is accused of being the Blackened, the reason he wasn't defending himself being because he figured out Kaede is the killer and remained silent in order to protect her. Kaede notices this, and then urges the distraught Shuichi to convict her as the Blackened.

After Kaede is proven guilty for Rantaro's murder, Kokichi comments to Kaede that she "really was...not boring," and Shuichi attempts to grab her hand to save her as she is being dragged away by the token first execution neck-grabber.

For the rest of the game, you play as Shuichi, giving Shuichi and Kokichi their own separate moments.

Kokichi has notable moments in canon where he shows interest in Shuichi. In one interaction, he claims that he "loves him the most", and that he's his favorite. Even though he claims it's a lie right after that, this exact same sentence can be found in his Love Hotel Event.

In chapter 3, if you choose to talk to Kokichi in a random moment before the seance, he'll say that he'd rather have Kaede back instead of Rantaro, because it would make Shuichi happy. Since Kokichi is known to choose logic over emotions, this is an unsual thing for him to say.

In Chapter 4, right before the body discovery of Miu Iruma, Kokichi propose to Shuichi to join him and help him end the killing game, while leaving Kaito behind. Not believing him and mad that Kokichi called his best friend an idiot, Shuichi leave the virtual world they were in.

Kokichi then has an non-skippable dialogue where he says that he's sad over being rejected, but that he'd do anything when he finds "someone he likes", referring to Shuichi. This scene appears to be a confession in the original version of the game (Japanese Dialogue), when Shuichi is referred to with "the man I fell in love with".

In Kokichi's Free Time Events with both Shuichi and Kaede, he invites them to join D.I.C.E, his secret organization. Knowing that he considers the members of DICE as a part of his family, that holds a lot of significance to Kokichi. As usual, he says it's a lie when asked more about it, but Kokichi is rarely shown to ask anybody to join his organization other than them.

In Kokichi's last Free Time Event with Shuichi, the protagonist is shown to care about Kokichi, as he immediately goes to tend his small wound once he got hurt by the knife game. After that, Kokichi laughs and claims that he stole his heart, and made him constantly think about him. Shuichi then tries to take his hand, but Kokichi refuses to. This is a parallel to their gradutation event, where Shuichi does take his hand, and make a comment about how warm his hand is.

In Kaede's last Free Time Event with Shuichi (Salmon Mode), they are shown to be having a piano duet, after they had trained together in the other Free Time Events. They seem to be blushing, and Kaede makes him promise that they'll keep this relationship even after they get out of the academy.

In the Love Hotel Events, Shuichi and Kaede are portrayed as a couple in Kaede's fantasy, and Kokichi and Shuichi are portrayed as a detective and a phantom thief. It is important to note that in those scenes, Shuichi takes the role of their ideal lover, so it does not necessarily prove anything about any relationship. But it is important to add that Shuichi notices not being somebody else in Kokichi's fantasy.

Saioumatsu sailed likely for the same purposes as Naegamigiri and Komahinanami did - because their dynamic consists of the protagonist, his implied love interest, and his rival. Sometimes, it was because fans were stumped on whether to ship Saiouma or Saimatsu. As a result of such dynamics, the polyship is among more recognizable ones in the fandom, although it's still not as huge in popularity. Some fanarts will show Kaede and Kokichi flirting with Shuichi, with him being flustered. 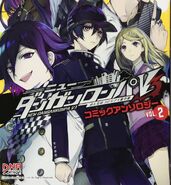 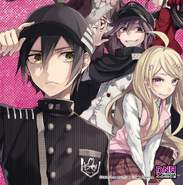 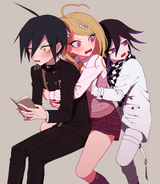