Friends/Classmates; Miu is dead
One-sided attraction on Miu's side (Free Time Events/Love Across the Universe)

Sairuma is the het ship between Miu Iruma and Shuichi Saihara from the Danganronpa fandom.

In their Free Time Events, Miu constantly shows Shuichi her perverted inventions. At one point Miu confesses her attraction to Shuichi, one that isn't shown in the canon story. The boy wonders if her confession was genuine or another one of her teasing jokes. In their last event, Miu made a pie with her hair, cookies with her fingernails and chocolate with her blood so that Shuichi could "eat her."

During the Love Suite event, Miu and Shuichi are childhood friends. Miu is shown to be blushing and tells Shuichi that he can have 'his way with her' (inferring to sexual conduct), however Shuichi is confused. Miu angrily tells Shuichi if he didn't hear her and proceeds to call him an asshole twice. Shuichi tells Miu that he heard her but he didn't quite understand, Miu asks Shuichi why and he responds by telling her it felt way too sudden. She tells Shuichi the reason why she only wants to do it was to thank Shuichi, as she believed it was a good reward for a man. Shuichi is confused with why Miu wanted to thank him and she becomes upset again. Miu tells Shuichi to not laugh which he agrees, also to not shout at her and he tells her to not worry about it. Miu tells Shuichi ever since they were kids Shuichi has been taking care of Miu, and tells him how he's always been on her side. She also explains how Shuichi knows her true persona and how she was able to keep her head up as the Ultimate Inventor. Miu then confesses her true intention and wanted to have Shuichi's baby, but instead Shuichi acts shocked. Miu is once again angry with Shuichi telling him why doesn't he clearly understand her, Miu tells Shuichi that the baby will be the best due to Miu's talent and Shuichi's personality. Shuichi is shown with a disappointed look which makes Miu assume that he doesn't want a future with her, Miu tells Shuichi that he didn't want him to abandon her (hinting at Miu's abandonment issues) which is why she wants a baby. Miu begs Shuichi that she wanted him until Shuichi tells her that he was unable to do that. Miu gets frustrated with Shuichi and then tells him she'll do it instead until the scene cuts out, it's heavily implied that Shuichi and Miu had sex together afterwards.

“B-But...I just want the person I like to eat me... I-I made more, too... Cookies with my fingernails... Chocolates with my blood...”
— Miu including a bit of herself in her cooking for Shuichi so that he could "eat her," in the fifth event.

Shuichi – “Ah, um, I'm really...honored that you made this for me, but I'm concerned about the hygiene... And there are no hospitals around here, so we have to be careful...”
Miu – “... Hah! You got a lotta balls to lecture me! But y'know, even a genius like me should be more careful with the stuff I make! If anything happened to you...I might...go crazy... I-If that happened, the world would never recover! Right!? Isn't that right!?”
Shuichi – “Y-Yeah?”
Miu – “Oh well! I'll just hafta make you something else!”
— Miu being concerned about Shuichi, in her own way, in the fifth event.

Miu – “You get it now? You've earned the right to date me!”
Shuichi – “I've what!?”
Miu – “When we get outta here, you're goin' on a date with me! Got it!? It's already decided!”
Shuichi – “It is!?”
Miu – “Duh-doy! If you go on a date with me, I'll just explode with excitement! If you turn me down, the world will never recover! Understand? You're the only guy in the world who's ever made me feel this good! So you better take responsibility for what you've done! Hah-hahahahaha!”
Shuichi – “ ... This is how Miu expresses her feelings, I see. Alright... I understand.”
Miu – “Hahahaaaaa! It's a date! You promised! Better not forget!”
Shuichi – “Ah, haha...”
— Shuichi agrees to go on a date with Miu once they escape, in the fifth event.

The ship sailed as a result of Miu's one-sided attraction to Shuichi, which she developed in their Free Time Events. Their Love Hotel scene further fueled the ship for some or made some abandon it. Although it's quite popular, especially among those who have seen their Free Time Events, both characters have their more popular ships, such as Saimatsu and Kiiruma. 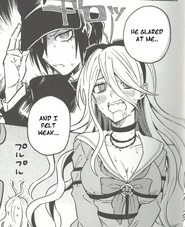 A part of anthology 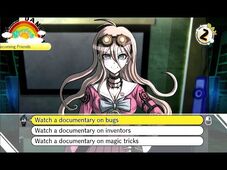