SakuAtsu is the slash ship between Sakusa Kiyoomi and Miya Atsumu from the Haikyu!! fandom.

Atsumu and Sakusa are both players for the Japan's V. League Division 1 team MSBY Black Jackals. Sakusa plays as a wing spiker and Atsumu plays as setter of the team.

Before the timeskip, the only time they are seen together is at All-Japan training camp, but it's known that they probably met each other at the inter-high finals when Inarizaki and Itachiyama faced each other.

After being introduced in the timeskip as Black Jackals members a few interactions have been seen between them. They are seen teasing each other about their abilities, like the moment when Sakusa gave a smug look to Atsumu after making his second service ace of the BJ vs. Adlers game.

Atsumu was the first known character to gave Sakusa a nickname, calling him Omi-kun and Omi-Omi.

The ship between Atsumu and Sakusa was probably born since the moment the fans found out Atsumu referred to Sakusa as Omi-kun. The nickname plus the attitude they have towards each other was enough to make them a popular ship among the manga readers.

The ship dynamics are mostly centered around Sakusa's germaphobia, his aversion towards touching other people and how Atsumu is usually the exception. Sometimes it's about Atsumu helping Sakusa overcome his fears, and other times Sakusa's aversion is portrayed as him being a tsundere.

The fans seem to like the idea of Atsumu being the one who can bring out Sakusa's soft side. 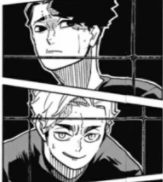 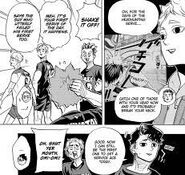 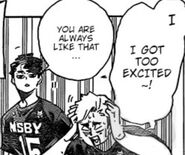 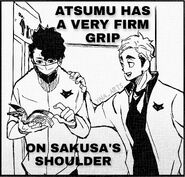