• Birds of a Feather - Both characters talents are related to physical activities.

Sakuraoi is the femslash ship between Sakura Ogami and Aoi Asahina from the Danganronpa fandom.

Sakura was Aoi's best friend during her time at Hope's Peak Academy. The two shared very similar interests, such as drinking protein beverages and first bonded over their love for sports. They were rarely ever seen apart since their high school days. Sakura was always the first person Aoi would turn to, especially during the Killing School Life, and she affectionately addressed her friend as Sakura-chan. On the other hand, Sakura was extremely protective of Aoi and usually tried to keep her from trouble.

During the Killing School Life, when Sakura was revealed to be the mole, Aoi had the most trouble believing this and still believed in Sakura even after she confirmed this in which she still respects her. When the some of the other students refused to accept her friend, Aoi was the only one who acted angrily when she defended Sakura by going too far as slapping Byakuya for badmouthing her and physically fight Toko/Genocide Jack. However, her actions only made Sakura more worried about Aoi's safety.

When Sakura committed suicide, Aoi was left devastated, and wailed and shed tears over her death. Upon reading Monokuma's falsified suicide note, she was left to believe that Sakura had committed suicide in despair and that she and the other students were to blame. As a result, she attempted to get herself and the remaining students executed, her plans were ultimately thwarted by Makoto Naegi and Kyoko Kirigiri.

Upon discovering the truth about Sakura's reason for killing herself, Aoi broke down into tears and demanded that Monokuma give her Sakura's actual letter, however, this request is obviously denied. Although depressed about Sakura's demise, Aoi decided to continue to move forward and remembers Sakura throughout the rest of the killing game. When Aoi nearly fell into despair, her memories of Sakura, along with encouragement from Makoto, were what gave her hope when she decided to break out of Hope's Peak Academy and avenge her friend's death.

In School Mode, Sakura appears a little annoyed when Makoto attempts to ask if she and Aoi are a couple. Sakura answers that Aoi is the first real friend she's ever had and considers Makoto's earlier assumption a "Hifumi-like delusion".

“Sakura's really awesome, ya know? If she really wanted to... ...she could tear this door to shreds!”
— Aoi complimenting Sakura's abilities

“If you lay a finger on Hina... I will show you no mercy!”
— Sakura to Genocide Jack in Chapter Three

“You're usually like, totally normal. But when the time comes, BAM! You bust out your special power. I mean, even before yesterday, when stuff comes up, it's like...you always do something about it. With your power, and Sakura's, and everyone else...I'm sure we'll get outta here... Now that we've got that fighting spirit, let's go get some grub!'”
— Aoi to Makoto in Chapter Four

“It's my own fault. But I just...couldn't take it anymore. Because... Because...! Because she was saying all these terrible things about my friend, ya know!?”
— Aoi, explaining why she challenged Genocide Jack and got hurt

“To hurt Hina... Damn you...! To leave me alone, but hurt her... What is this...? What is this!? Grrrrnnnnhhhh! Unforgivable... I can't forgive them!”
— Sakura's response to Aoi getting hurt by Genocide Jack

“Hina... Please, don't think of things like that. They're not my enemy. They're...friends." (About Byakuya, Toko, and Yasuhiro)”
— Sakura telling Hina not to blame anyone else

“Because everyone...even me...we all killed her. We all have to pay for our crimes...”
— Aoi explaining why she tried to execute everyone including herself (Under the false impression under Sakura's fake suicide note)

“Don't stand there and call it a misunderstanding! She believed in you...and you wouldn't even listen to what she had to say. Without asking a single question, you tried to kill her... Do you have any idea how desperate she was, seeing you act like that!?”
— Aoi's passion about Sakura's death

“She had weaknesses, just like any other person. If she got cut, she bled. If someone hurt her, she felt it. That's weakness... That's normal...! And yet... You all blamed her... I tried to protect her, and I suffered for it. And that just added to the weight she had to carry...! We killed her... All of us. We pushed her into a corner...and we murdered her. People like us shouldn't be allowed to live!”
— Aoi about Sakura's death

“Sakura died hating all of us. I wanted to free her of her regrets. But even that got found out. In the end, I wasn't able to do anything for her... I could never face her after this...”
— Aoi's hate with Sakura's death

“...Finally...Hina, I want to apologize to you especially. The reason I didn't tell you any of this is because I knew you would try to stop me. I'm really, truly sorry. But please don't be sad. If I can thwart the mastermind's plans, if I can keep you from killing each other... ...that's enough for me. This is the path that I have chosen. This is the only way I have left to distinguish myself. And you can use this note to bring the Class Trial to a quick end. I'm so sorry to ask you to do something so unpleasant, but I have to leave the rest to you. Please talk to Byakuya, Toko, and Hiro on my behalf. I can't tell anyone about my plan while I'm alive, but I wanted you to understand why I'm doing this. In the end, though, I hope to show myself through actions and not words. Hopefully then they'll see... I never saw you as my enemy. You were only ever my friend, who I wanted to help as much as possible... Hina...whatever it takes, survive. Survive along with everyone else. No matter what...just survive”
— The final paragraph of Sakura's suicide note

“Sakura...if you can hear me, lend me your strength...”
— Aoi in Chapter Five

“Sakura's gonna be watching over us... So we're definitely gonna find something to help us bring this to an end!”
— Aoi in Chapter Five

“I've been thinking about all this... And I was thinking...at a time like this, what would Sakura do? You only get stronger by taking adversity by the horns! Confront that thorny path with enthusiasm! That sounds like something she'd say, right? No, I think that's definitely what she'd say! Which is why I...I...! Yeah! I've made up my mind!”
— Aoi in Chapter Six

“Well, I guess this is goodbye. ...And goodbye...to Sakura. But hey! If we gotta say goodbye, we may as well do it with a smile on our face!”
— Aoi's reflection in the epilogue

“You called them? Don't do this, you'll be in danger”
— Aoi being worried about Sakura trying to fix the group tension (after Sakura being revealed as the traitor)

“No, Sakura don't do this! Take me with you, I'd rather die than be left alone. S-Sakura!”
— Aoi trying to get into the locked room (Episode 9, when she realized Sakura committed suicide)

The ship has sailed as a result of the strong friendship that was quickly developed between the two, as well as the effect Sakura's death had on Aoi. A lot of fanfictions and fan arts show them romantic involved with each other, some fanfictions also include, Sakura's first love named Kenshiro. 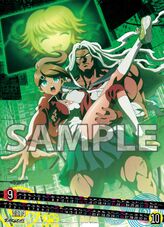 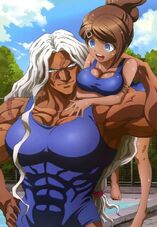 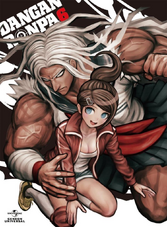 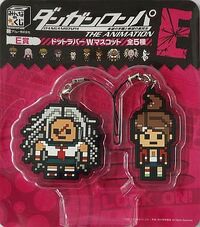 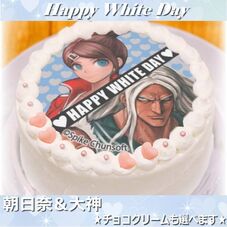 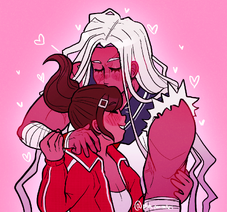 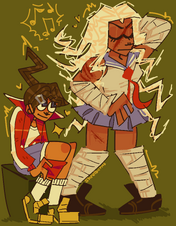 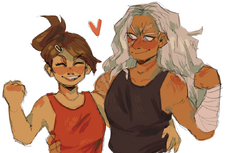 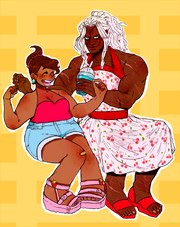 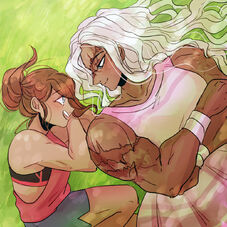 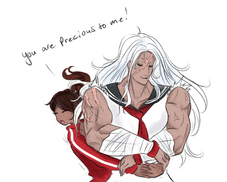 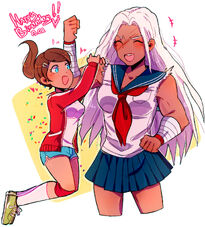 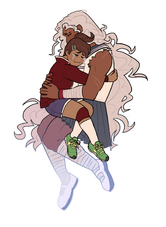 Don't cry about it sakuraoi