View source
watch 02:56
Doctor Strange in The Multiverse o Madness - The Loop
Do you like this video?
Play Sound
WOAH! THAT'S ONE SMALL SHIP!
• THIS ARTICLE IS A STUB. YOU CAN HELP BY EXPANDING IT •
Stub pages are deleted after 4 months. If not filled out enough, Sakushiro will be deleted on
7/14/22

Sakushiro is the het ship between Kenshiro and Sakura Ogami from the Danganronpa fandom.

There is only a small amount of information known about the relationship between the characters, which is revealed to the player during Sakura's Free Time Events.

According to Sakura, she and Kenshiro were lifelong rivals. Despite multiple attempts, Sakura could never defeat him in battle. The two grew closer overtime, and Sakura would eventually develop romantic feelings for Kenshiro, describing him as her "first love." However, she was embarrassed by this, as she felt it wasn't appropriate for a fighter like her to have a crush. However, Kenshiro assured her that it was okay for her to have a feminine side, and he also supported her goal of becoming the strongest person in the world.

Sakura later reveals that Kenshiro was diagnosed with a terminal illness that gave him six months to live. Sakura would only visit him once, and found that the illness had drastically weakened him and changed his appearance. While in his weakened state, Kenshiro passed on the title of "strongest person in the world" to Sakura, and told her to not let anyone take it from her, and that he would return to reclaim it after he got better. Sakura vowed to hold onto the title until that day, and Kenshiro gave her the red scarf she is always seen wearing as proof of their vows.

While the two are never explicitly stated to be lovers, it is heavily implied that Kenshiro returned Sakura's feelings. In Danganronpa: Trigger Happy Havoc IF, it is stated that along with the rematch that Kenshiro promised Sakura "something more" as well, indicating a potential romantic relationship after he recovered and if Sakura defeated him.

“That's right. My lifelong rival. And... My... My first love.”
— Sakura begrudgingly admitting to Makoto Naegi that Kenshiro was her first love.

“Well, in certain ways. Your build is ovbiously very different, but you both have a strong core.”
— Sakura comparing Makoto to Kenshiro, stating they both have a "strong core."

Despite its heavy canonical implications, Sakushiro isn't greatly popular in the fandom. This is likely due to the popularity of Sakuraoi, along with the fact that Kenshiro is only mentioned during Sakura's Free Time Events, and has never physically appeared in the series. Despite this, it can still be considered one of Sakura's most popular shipping choices, as she doesn't have very many. 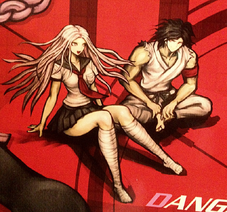