• Battle Couple — Both are ex-military, Sam is an Avenger, and Bucky is a former assassin.
• Friendly Rivalry — Bucky and Sam are both friends with Steve. This doesn't mean they have to like each other.
• Headbutting Heroes
• Like an Old Married Couple
• Reformed But Rejected — Sam doesn't think that everything is all good just because Bucky says a couple of things about Steve's past.
• Rivals Team Up — Sam and Bucky are paired together to get to the Quinjet.
• Vitriolic Best Buds

SamBucky is the slash ship between Bucky Barnes and Sam Wilson from the Marvel Cinematic Universe fandom.

As Steve is shot, Bucky heads to wear the sniper shot from, Sam following him from above. When Bucky enters the building, the shooter is gone. He notices the skylight, just as Sam flies through and pins him to the nearest wall. He accuses Bucky of shooting Steve, and that he better hope that he's still alive. Bucky says that he is, Sam realizing his mistake. Bucky says that he'd kill himself before that. Fury calls Bucky, saying he has his eyes on the shooter, and Bucky asks if Sam can carry him and fly at the same time.

Sam carries him out, Bucky telling him to go for the helicopter carrying the shooter. Bucky pulls out two guns, Sam asksing what he's doing. Bucky responds that he's taking them out, and shoots at the helicopter blades. The shooter, Crossbones, jumps out as the copter goes down, and attacks Bucky, pulling him from Sam's arms. On top of the nearest building, Bucky is able to knock out Crossbones as Sam flies in. He tells Bucky to leave before the Shield Agents show up and rope him in. Bucky agress and asks if Sam can hands Crossbones. Sam says that he's not going anywhere. Bucky tells him to get to Steve soon, since he can't be there.

Bucky regrets getting into a bar fight just as Sam shows up. He asks if they were bad guys, but Bucky says that they were just morons. He tells Sam that Steve would have liked what he said at the funeral, and that he really understood Steve. Sam says they have to run since the cops are on the way. Bucky agrees and goes to pay his tab just as Tony's speech from the funeral plays. Bucky pauses and Sam asks if he's coming. Bucky says yes and they leave.

Steve, Sam, and Natasha had kidnapped Jasper Sitwell, one of the undercover HYDRA agents working for SHIELD, and had taken the freeway when the Winter Soldier lands on the roof and throws Sitewell out the window and kills him. The Winter Soldier starts to shoot at the three through the roof, and they're able to throw him off. He lands in front of their car just as a HYDRA truck shows up and forces the car forward. Sam tries to stop the car as the Winter Soldier jumps on top of the roof. He then shoves his hand through the front window and takes the wheel out of Sam's hands, and the car crashes.

As Sam and Steve make their way to the helicarrier control room, Bucky rams Steve off the side. Sam goes to get him, but Bucky grabs onto one of his wings and throws him back. Sam stops himself from falling to the ground and starts to shoot at Bucky, who is able to dodge before taking cover. Sam starts to fly away, but Bucky launches a zipline at his wing and slams Sam into the ground. He pulls off the wing and runs towards Sam, and kicks him off the edge of the Helicarrier. Sam is luckily able to land safely at the bottom.

Bucky wakes up, his arm locked in a machine, with Sam watching him. Sam calls over Steve and the three start to talk. Steve belives that they're talking to Bucky without mind control, but Sam asks if that makes everything automatically okay. Bucky tells them that Zemo was looking for the other Winter Soldiers. Sam asks if they all turned out like him, and Bucky says that they were worse. Sam tells Steve that this would have been easier a week ago, and they don't know if the accords will allow Tony to help.

As Bucky and Sam run through the airport, they see Spider-Man climb along the outside windows. Bucky asks what that is, but Sam just comments on everyone having a gimmick. Spider-Man then swings around and knocks through the window, and kicking Sam to the side. He then goes to punch Bucky, who stops him, and Sam gets up and flies him away from Bucky.

As Spider-Man chases after Sam, Bucky throws some debris at him to distract him, but it gets thrown back in his face. Sam is brought down by Spider-Man and webbed against the railing. As Spider-Man swings to kick Sam, Bucky runs in front of him and takes the hit, sending them both to the lower floor. Spider-Man webs them both, but Sam sends Red Wing to remove him before he can make an official arrest. Bucky tiredly asks if he couldn't have done that earlier, Sam replying that he hates him.

Sam and Bucky don't end up meeting, but both fought in Wakanda at the time. The two both turn to dust as a result of the Decimation, or Thanos' Snap.

“I did appreciate any interaction I had with Falcon really enjoyed especially throwing punches at him.”
— Sebastian Stan on Bucky in Civil War[1]

“Somebody the other day said, 'You know what the real love story is? The Falcon and Winter Soldier.'”
— Sebastian Stan[2]

When a fan at Ace Comic Con asks if Sebastian would ever play an LGBT character again that he would as long as the story is right, just as Anthony Mackie makes his entrance[3]. As Anthony sat down, he pulled Sebastian towards him and placed his arm over his shoulder. Sebastian then stated that said story could happen now[4].

“It only took about four press tours for someone to kind of get the idea, that these two lunatics, should have a show.”
— Sebastian on The Falcon And The Winter Soldier[5]

Not being a very popular ship among the Marvel Cinematic Universe fandom, there isn't a lot of fanfiction compared to more popular ships, like Stucky or Stony. There were some who shipped them in the comics, and would combine some of their 616 characteristics with their MCU counterparts, which is common for fans of both. Some fans started shipping them from The Winter Soldier most based it on the press tour interviews between actors Anthony Mackie and Sebastian Stan. Given that Marvel has a history of hiring actors who are similar to their characters, it made MCU fans want to see more of Sam and Bucky interact. More started to ship the two after Civil War, given their more shared screen time. With the announcement of the Winter Soldier and Falcon series fans of the pairing were excited. The end of Endgame also set up the two for the series, but also caused many to ship them.

Most ship them based on their more snarky back and forths, specifically saying that they have a more buddy cop dynamic. Many joke about how the only reason they spend time together is because they're both best friends with Steve, and when he's not around they'll instantly start fighting.

After Endgame, the increase in fans of the pairing were due to the end result of the movie. The two were left alone without Steve, and would often use that as a point in current fics of pairing them together.

On AO3, there are over 1800 works, and is the second most written ship for Sam. On Wattpad, there are only 66 stories within the Winterfalcon tag. 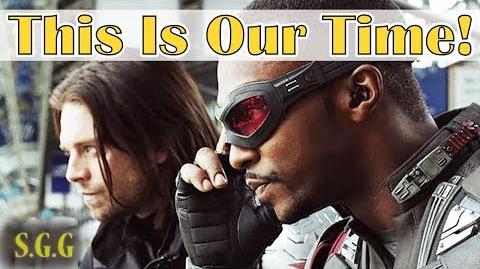 The Rise Of Falcon & The Winter Soldier - WinterFalcon

Sam Wilson vs Bucky Barnes - Can Can

Bucky and Sam - Where Did The Party Go

Retrieved from "https://shipping.fandom.com/wiki/SamBucky?oldid=176556"
Community content is available under CC-BY-SA unless otherwise noted.