SaneKana is the het ship between Sanemi Shinazugawa and Kanae Kocho from the Demon Slayer fandom.

The first meeting between Kanae and Sanemi happened off screen, when Sanemi was promoted to the rank of Wind Hashira (at that time Kanae was already a Hashira). The two first appear in one frame in chapter 168, during a meeting, when Sanemi angrily accuses Kumeno, their leader, of not valuing the lives and efforts of the demon slayers who die for their cause. Kanae looks concerned for him; she cuts into Sanemi's outburst and tells him about their leader's phenomenal ability to memorize all of the names and backgrounds of their fallen comrades. She is notably one of the only pillars that are not angry with Sanemi's rudeness, but rather worried for him, and the only one, besides Gyomei, to speak up. After reading Masachika's will, Sanemi starts crying. Kanae is seen next to him with a concerned expression.

In the third Kimetsu no Yaiba light novel, Sanemi goes to the butterfly mansion to get his wounds treated. Kanae chastises Sanemi for getting wounded when his previous injuries haven't healed yet. She also gives him advice and tells him to get along with Kumeno. When she is tending to his injuries, he thinks she is being very gentle with him, as if she fears she could hurt him. Sanemi notices she has warm and gentle hands; they remind him of his mothers'. Sanemi seems shocked when Kanae calls him kind. Afterwards, he meets with Masachika and Shinobu, Kanae's younger sister. When she says she is leaving to find her sister, his face reddens. Sanemi reflects on the Kanae and Shinobu's story and thinks that he would have never let his younder sibling become a demon slayer, like Kanae did.

In the second official Kimetsu no Yaiba fanbook, there are pages where each Hashira states their impressions and what they think about the other Hashiras. On Gyomei’s impression of Sanemi, he states: “He has a strong spirit and is honest at heart. He likes Kanae.” On Sanemi and Shinobu's pages, it is stated that Sanemi regularly asks Shinobu how she's doing when they meet, considering how she is Kanae's sister.

Despite being so vastly different from each other, they share many similarities. Both are the eldest of their family and wish to protect their younger sibling(s), both have lost almost all of their family to demons, and their reasons to become demon slayers are also similar: avenging their family. The one exception to this is that while Kanae seeks to make peace with the demons and befriend them — Sanemi is hellbent on eliminating all demons.

“Seeing that kind and gentle smile right before him from close up, Sanemi quelled his anger for the moment and did not talk back to the woman in front of him. Just when he turned his head, Kanae nimbly tended to his injuries. Kanae’s actions were extremely delicate. He could feel that she was afraid that she was going to hurt him.”
— Kimetsu no Yaiba: The Wind's Telltale Signs

It is a rare-pair and generally new ship. The ship has more popularity among Japanese fans based on the amount of fanworks, but it still has a decent amount of English-speaking fans, such as 3rdgymbros's blog on Tumblr and the works on AO3.

SaneKana started gaining popularity when people realized how well their personalities went together, Sanemi with his harsh personality and Kanae with her gentleness. Their potential, aesthetic, and similarities is what they're mostly shipped for. In fan interpretation, Sanemi is often depicted as smitten with Kanae, and too frightened to make the first move, fearing she might reject him. When fan works include other character, such as Sanemi and Kanae’s siblings, then the pair is presented as a very affectionate and loving couple who also takes care of their younger friends.

Fans were delighted when it was revealed that Sanemi talks to Kanae a lot in Tales of a Demon Slayer Academy and the new information about them in the third light novel and second fanbook and all this has reinforced their love for the ship.

Kanae trying to calm Sanemi down 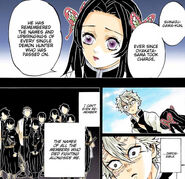 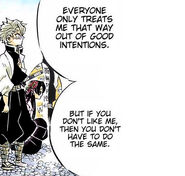 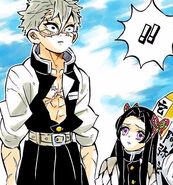 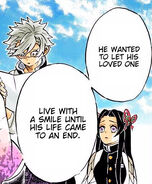 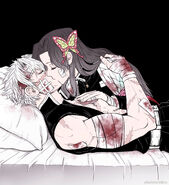