SaraBaal is the femslash ship between Kujou Sara and Raiden Ei from the Genshin Impact fandom.

During the archon quest, "Chapter II: Prologue Autumn Winds, Scarlet Leaves", Kazuha mentions that his friend challenged Baal, the Electro archon, in an attempt to fight back against the Vision Hunt Decree. Kujou Sara is known to work for Baal, and promptly stepped in to fight Kazuha's friend for Baal. Sara is powerful, and managed to beat Kazuha's friend, leading to divine punishment which was carried out by Baal.

Sara is shown to be very loyal to Baal. Though she sometimes recognizes the cruelty of Baal's actions, she has decided to obey her regardless. Her life goal is to see Baal's dream of "eternity" become reality. In Sara’s voiceline, she states she has five statues of Baal in her house.

As far as we know, Baal has no particular opinion on Sara. She does seem to trust her enough to lead her army and keep a vision.

In the stream showing some of the new updates coming to Teyvat, the narration talks about how Sara is 'loyal to the Raiden Shogun and her duty'. Sara is then shown nocking an arrow with electro energy and saying 'By order of the Almighty Shogun!', dedicating her attack to Baal. Her words also show that she thinks highly of the Electro Archon by calling her almighty.

In Kazuha's voice line about Sara, he says that he recognizes Sara's great strength because she beat his friend, but uses that strength to serve an oppressor. He doesn't understand why she does that, and for that, cannot forgive her. Perhaps Sara has some sort of agreement with Baal and serves her because of such a thing. Even so, she leads troops to carry out Baal's command and follow the rules of the Vision hunt Decree.

In Baal's voice line about Sara, she says that Sara is a loyal and righteous subject and an accomplished warrior, and is worthy to be called a hero.

“As I'm sure you've heard many times before, the Almighty Shogun seeks Eternity — an existence beyond the dominion of thought and longing. "Abandon mortal ties, strive for an unchanging Eternity"... The Almighty Shogun's manner is always resolute, and I do not always fully grasp the meaning of her words. But this is her decision, and I trust her.”
— Sara's Voiceline about Baal; Trust

“So, the Vision Hunt Decree was repealed... Yes, it seems that you were right. ...Ahem, but this is not to say that the Almighty Shogun made a mistake. She has simply chosen to pursue eternity by a different route. I do not know whether the Shogun has finally found inner peace after protecting Inazuma over all these millennia. All I know is that however perilous the road ahead may become, I will follow her as I have always done.”
— Sara's Voiceline about Baal; Service

“A loyal and righteous subject, and an accomplished warrior. She is worthy to be called a hero. With an heir of such great promise, the future prosperity of the Kujou Clan is assured.”
— Baal's Voiceline about Sara

SaraBaal quickly gained some popularity after the first trailer and subsequent release of Inazuma, as shippers expectedly found the idea of Sara's extreme loyalty to her ruler enough to speculate about her romantic feeling for the latter. This was also helped by both the fans projecting their admiration for Baal onto Sara, and that Sara subjectively matched the many anime tropes of butch warriors who are extremely loyal to their oujo female rulers. One way or another, at the moment, the story or characters doesn't give any explanations about the motivation for her loyalty (for example, Kazuha's voice lines mentions that he doesn't know any reasons for this).

Since it has been mentioned that Baal remains cold to mortals and any possible feelings other characters may have for her will likely be one-sided, fan content for this ship often portrays Sara as either her passionate fangirl or something like the Maniac Pixie Dream Girl who helps her open up to ordinary people. 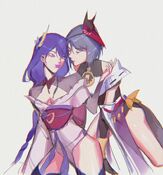