Sayonika is the femslash ship between Sayori and Monika from the Doki Doki Literature Club! fandom.

Sayori is the vice president of the Literature Club, Monika's second-in-command.

In Doki Doki Literature Club Plus, their relationship got further explored in the side stories, which show how the Dokis have met each other and what would've happened if Monika never became self-aware.

Starting from the beginning of their side story; Trust. With Monika starting a Literature Club after quitting Debate Club. It's revealed that she's been having trouble trying to recruit new members. For a while, Monika took a nap and met Sayori who wishes to join the Literature Club. Sayori asks Monika if it was the Napping Club. Within, Monika got embarrassed and apologizes her for it.

Sayori asks Monika if she misses the club meeting, Monika answers her saying just the two of them. Sayori was ever the first to join the Literature Club excluding Monika. Sayori saying if it's just her and Monika, meaning that she gets to be the vice president of the Literature Club. So Monika asks her, what are her qualifications. Sayori answers her, saying that she's better at napping then her.

Sayori states that she should be the President, making fun of Monika. Monika tells her that, and she apologizes for it. Monika tells that cares about the Literature Club, Sayori promises and so. She told that it was a joke for her to be the vice president, since it would make a horrible one.

Monika apologizes to her for not being an actual club yet, she asks her if she is interested to join in the club after she finds a few more members. Sayori exclaims that she wants to join now because it sounded a lot of fun. Sayori then told her that she can tell how hard she has been working. She compliments her, saying that she has been doing something amazing and she should be proud of it.

Sooner or later, Monika discovers Sayori's depression and at first tries to confront Sayori about it. At first, Sayori is reluctant but then comes to trust Monika, as well as asking for trust in return, with her secret. Monika at least tries to support Sayori in the best way she could by letting her vent while crying on her shoulder.

Sayonika is a very popular ship within the DDLC fandom. Sayonika often acts as the partner ship to Natsuri, which is also a very popular ship. Many fans ship the two also due the the fact that Sayori is the vice president and Monika is the president. Despite the fact that Monika deletes Sayori, fans hoped that deep down, Monika cared about Sayori.

The ship currently has 191 fanfictions on AO3, its one of the most written Doki Doki Literature Club! ships. 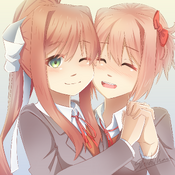 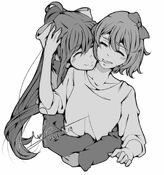 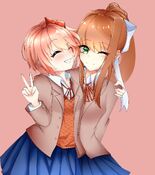