Both characters have not interacted in the canon storyline yet.

There are a few notable similarities between Ei and Scaramouche. Both are Inazuman electro users who aren't shown to have visions, they have similar hair color with the same pale purple streaks, and they both wear purple and red clothing decorated with the symbol of the electro element.

In the version 2.1 trailer, Scaramouche appears in Inazuma and comments on the fragility of Ei's eternity.

Ei still remembers Scaramouche and acknowledges his existence. In the artifact set Husk of Opulent Dreams, the set explains about his past and Scaramouche too knew her as his creator. But he thought that he was abandoned by her as it was said in the Plume of Luxury:

“The intelligent, lovely shrine maiden said: "This gold ornament is a proof of identity granted by the Almighty Shogun," "And she will not abandon you." "As for me, I shall do my best to send for help immediately..." ...But in the end, the golden arrow-feather were covered in dust, "And all tales were incinerated in karmic flames till nothing remained.”

Yae Miko tells the traveler that Ei, while developing the technology to create her duplicate, created a test puppet who was not made in her image. Because he was useless to her, Ei allowed him to wander free. Eventually he was taken and modified by the Fatui, and given the identity of Scaramouche. Ei’s voiceline reveals that his real name is Kunikuzushi. Ei says that she feels like she owes him something, which is why she does not assert control over him.

Since Scaramouche's first appearance, numerous theories have surfaced regarding him and Ei. Initially it was suspected that he might be Ei in disguise or the previous electro archon. Baal was eventually confirmed to be a separate character and no connection to Scaramouche was proven. Around the time the 2.0 update was announced, the theory that Scaramouche was the archon before her was abandoned in favor of a similar theory involving Yae Miko. This development fueled the popularity of the idea that Scaramouche and Baal are relatives of some sort.

By far the most common interpretation was that these two are siblings. However, it was argued that Ei is much too old to be his sister due to her immortality. While this could be explained by Scaramouche being immortal as well, there is no evidence for it. This gave rise to a theory that Ei is Scaramouche's mother or a distant relative. Fans found the idea of Ei being a mother amusing and there are several fanarts portraying this dynamic with Scaramouche

It has been confirmed that Scaramouche is one of Raiden Ei’s creations, and could be considered her child. His past is described as such in the Pale Flame artifact set:

“He was born with a face fairer than any other, Destined to a long life and a hollow will. He was a transcendent being, divinely created, but he was cast aside like worthless dross. Yet, due to an error that cannot be known, he roused himself from slumber, And began to wander the mortal realm. Before the Fatui found him, he had drifted for countless years And in that time, this is what his experience had taught him: "I am a 'human' who surpasses all others." "Even the gods daren't meddle in my fate." "Neither mortal nor god, nor fate itself, is qualified to be my judge." "I am free to choose how I wish to spend the remainder of my days." "Since these mask-wearing people are so fun to be around..." "I think I'll become one of them."”

“He came about as a byproduct of creating the Shogun. Perhaps it's because I feel like I owe him something, but I do not wish to assert control over him.”
— Ei about Kunikuzushi 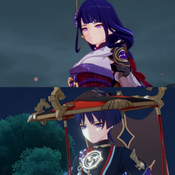 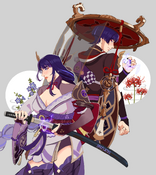