Scaramouche – “The stars, the sky... It's all a giant hoax. A lie.”
Mona – “The stars are a lie? What are you talking about?”
— Unreconciled Stars Event

ScaraMona is the het ship between Mona Megistus and Scaramouche from the Genshin Impact fandom.

They first met in the Unreconciled Stars event where Scaramouche greets the Traveler, Fischl, and Mona. As he greets them, he asks them if he can 'join' their conversation, although he was planning on getting rid the Traveler. Mona sensed Scaramouche’s intent to harm the Traveler and Fischl, and she acts quickly, escaping with the two. Scaramouche then questions about Mona and how was she able to know who he was, and then he assumes Mona's powers might show her things others might not be able to see.

Scaramouche then tells Mona and the Traveler that instead he found something which was more terrifying. Which he explains that the stars and the sky are lie. This angers Mona and asks him what was he talking about. Paimon then asks Scaramouche if he was trying to have an astrological debate with Mona. He then laughs at Paimon's comment telling them that he didn't believed the stars and sky weren't a lie until a few moments after freeing himself from the dream. Mona questions about what he means by a few moments ago before being told by Scaramouche he doesn't have the time. Scaramouche tells the two and Paimon farewell in a rather rude way as he called them suckers, which in fact angers Mona even more. Afterward, Mona fights the Fatui and after the fight she proceeds to call Scaramouche a scumbag. She traces back to what he meant by the stars and sky are a lie as she noticed Scaramouche was shaken, and doesn't believe Scaramouche was lying as she was taught to talk about the false sky in astrology readings.

After more of Scaramouche's lore were out (Pale Flame & Husk Of Opulent Dreams artifact description) Both of them mentioned fate in their respective lore and have the exact opposite about what they think about it.

"I am a 'human' who surpasses all others." "Even the gods daren't meddle in my fate." "Neither mortal nor god, nor fate itself, is qualified to be my judge." "I am free to choose how I wish to spend the remainder of my days."

"Fate is called as such, for it cannot be changed, nor can it be reversed. It can only but be accepted."

Also after Husk of Opulent Dream's lore comes out, which is about Scaramouche. We learn that Scaramouche is currently wanting a heart and he thought Gnosis could granted what he wanted thus why after taking it from Yae Miko, he ran away from Fatui for stealing the gnosis. In his past journey, he wanted a heart and learned about human hearts along the way. One of them including one of his friend Katsuragi that he described as "Good ones" being killed by Nagamasa, which he described as "The Upright ones". Nagamasa being corrupted into Greed and Selfishness thus killed Katsuragi.

Coincidentally, it aligns with Mona in her Character Story 5, in her description she is also currently learns about human hearts and interract with some people and found something exactly the opposite of what Scaramouche's found :

"He was originally born to be a vessel for a "heart." But he shed tears in his dreams. His creator observed thus: He was too fragile, whether it be as a human or as a tool. Yet his creator would not destroy him, and so allowed him to continue slumbering. In her latter works, she would also consign designs that might store such a heart to obsolescence. Not long after, that noblest and most prestigious "proof" in the world would come to have no home, And thus was sent to the great shrine at Mt. Yougou.

Later, the beautiful puppet awoke and began his wanderings. He observed many a heart, Good ones, upright ones, strong ones, gentle ones... The puppet, too, desired a heart. Later, the lovely puppet would finally obtain that "heart." It was, after all, his purpose for being, the very reason he existed. Yet, it was not what the puppet truly desired, For it did not contain any blessings, But was instead a sacrifice brimming with selfishness, hypocrisy, cunning and curses, All wrapped in an amiable husk.Good and evil were the song of sentient life, useless and cacophonous. But if he were to wrench this "heart" out, He would no longer be able to feel anything at all..."

"During her apprenticeship, Mona found that the subtle abstractions of her master's teachings could explain the laws that governed the existence of all things. Human hearts were guided by these laws, and if one had great enough powers of calculation, all the mysteries of the world could be understood. Mona once believed this to be true. But when she had to strike out on her own and live day-to-day, she found herself doubting. Not everyone lived wealthy and comfortable lives. Some neither had food nor warm clothes, living no differently from beggars. And it was just such an adventurer who, when meeting Mona while she was out looking for fruits and vegetables to fill her stomach, shared half their food with her. "Out here, we've gotta have each other's backs."

This was not something inscribed on these so-called principles of the world. And many other such things she encountered on her journey — the honesty of a thief, a robber's change of heart, a coward's courage, the good deeds of a wicked person... Mona began to have some doubts, but she also felt like she finally had her feet on solid ground. When she was again alone with her thoughts under the stars, she marveled that her research had been so full of holes. Perhaps she would have to continue researching the world's principles for the rest of her life."

Both of them are in the opposite about what they think about fate while also learn about human heart and find something, again, in a direct opposite to each other, while Scaramouche found negative emotions inside good people after experiencing the downfall of a good person became corrupted thus killed one of his friend in process also the heart who once he thought will be a blessing filled with hypocrisy, cunning, selfishness & curses. Mona on the other hand, found positive emotions inside bad people (the thief, the robber, the coward, the wicked). Both learn about heart, both also are a truth seekers, as Scaramouche said that he wanted to find the truth after saw what's inside the meteor in Unreconciled.

ScaraMona is mostly portrayed as an enemies to lovers type ship throughout the fandom, as most fanfictions exhibit them having a toxic relationship, (as one is a Fatui Harbinger, and one is the friend of the Traveler, the one Scaramouche is supposed to kill), before Scaramouche's hardened shell is cracked by his affection for Mona. Non-fans of this ship might find this ship rather abusive due to Scaramouche having a 'mean' personality.

Other ideas often seen in fan works about them is their constant fighting and bickering, Scaramouche often paying for Mona's meals and other necessities, and Scaramouche's uncharacteristic kindness towards Mona, when he's said to be rude towards everyone else he knows other than the Tsaritsa.

They don’t interact much during or beyond the Unreconciled Stars event, thus, making this a surprisingly popular ship even without much interaction. It is the most popular ship for both Mona Megistus and Scaramouche at the moment, with over 510+ works on AO3, the only ship coming close being ChiScara.

Scaramona Week is from April 22nd to the 29th. 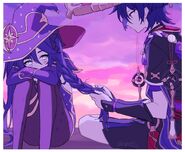 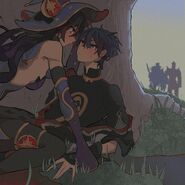 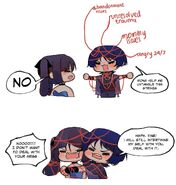