Scarlet Widow is the femslash ship between Natasha Romanoff and Wanda Maximoff from the Marvel Cinematic Universe fandom.

The two first met as enemies as Natasha is a Avenger while Wanda worked under Hydra, before joining Ultron. Wanda took Natasha's jacket (revealed in a deleted scene). They fought alongside each other in the Battle of Sokovia. Natasha and Steve later began training the new Avenger recruits, including Wanda.

Natasha continued to train Wanda. She accompanied Wanda on an undercover mission, sitting two tables away from her. When Natasha said that their target had a private security and more guns which means more headaches for the team, Wanda reminds them that she can movie things with her mind. Natasha then advised her that looking over her shoulder needed to become second nature.

The two eventually took opposing sides over the Sokovia Accords and fought against each other at the Leipzig-Halle Airport.

Wanda, Natasha, Steve, and Sam went on the run together, with Wanda occasionally leaving to meet up with Vision. After Wanda and Vision were ambushed by Proxima Midnight and Corvus Glaive, Natasha, Sam, and Steve showed up to save them. During the battle against Thanos' forces in Wakanda, Wanda leaped in to save Natasha and Okoye from Thanos' war machines. Natasha later returned the favor, teaming up with Okoye to distract Proxima Midnight from Wanda.

Natasha survived Thanos' snap to kill half the universe, while Wanda did not.

After Clint told Wanda that he wished there had been a way to let Natasha know they had won, Wanda assured that Natasha knew.

The ship isn't as common in the MCU fandom. This is due to their more limited shared screen time. Wanda was also introduced later in the MCU timeline so many fans already had preferred pairing for Natasha. The two also don't have an established comic relationship for fans to pull from, unlike other characters who don't interact as much on film. 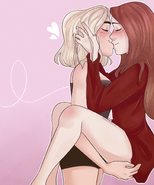