Schneekos is the femslash ship between Weiss Schnee and Pyrrha Nikos from the RWBY fandom.

Weiss and Pyrrha were friends at Beacon. They were seen talking to each other prior to initiation, though it's unclear whether they knew each other beforehand or not. Weiss seems to know a great deal about Pyrrha's career before coming to Beacon and acts much kinder towards Pyrrha than she does with the other students, even wanting them to be partners. However, it is later revealed that her reasoning for wanting to be Pyrrha's partner is purely selfish. Weiss is shown personally believing that with Pyrrha's fighting prowess and her intelligence, the two will become the most popular girls in school and they'll also get perfect grades.

Despite this, Weiss does see Pyrrha as an equal thanks to her past achievements in battle. Pyrrha is initially reluctant to commit to forming a team with Weiss but is still polite to her and agrees to it if the chance does arise. Pyrrha also pins Jaune to a wall upon Weiss' request, though she does apologise for it. When on a mission in the Forever Falls, Pyrrha tells Weiss and Ruby to wait as they are about to save Jaune from an Ursa grimm. She then afterwards explains her semblance to them and trusts Ruby and Weiss to keep her helping Jaune with her semblance a secret.

While Pyrrha and Weiss do not become partners or even end up on the same team they still become friends at Beacon. They're often seen together with their teammates eating as a group and despite both being the more serious ones on their teams, they both take part in the food fight against each other. Pyrrha was then later in volume 3 shown coming to Weiss's "rescue" when her credit card was declined and was unable to pay for her and her teams food. They then both also watched each other's fights during the vytal festival tournament. Weiss was also shown devastated when she eventually learns of Pyrrha's death.

Schneekos is a rarepair, even more so after Pyrrha's death in volume 3. Fans of Schneekos often take Weiss' prior knowledge of all Pyrrha's achievements to be some kind of celebrity crush, whether she realised it or not. Fans also like the similarity between them with them both being put on a pedestal and isolated from people for much of their lives. Some fanworks like to focus on them attending the Beacon Ball together as a way to avoid love triangle situation that happened in volume 2. It has a small fanbase on Tumblr. 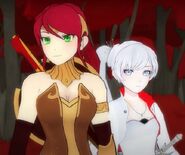 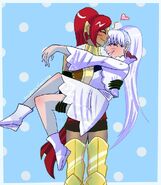 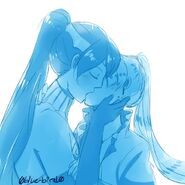 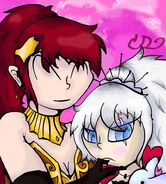