Science Boyfriends is the slash ship between Bruce Banner and Tony Stark from the Marvel Cinematic Universe fandom.

Tony and Bruce first met aboard the S.H.I.E.L.D. helicarrier. They worked together to find the missing Tesseract. Tony tried to convince Bruce that the Hulk wasn't such a bad thing, and that he should fight alongside them. Though Bruce initially refused to, he relented and fought alongside Tony as the Hulk in the Battle of New York.

Tony tried to vent his traumas to Bruce, but Bruce fell asleep, later telling Tony that he's not that type of doctor.

Tony and Bruce were working together on the Ultron Program, a global peacekeeping program. After they retrieved Loki's scepter from the HYDRA facility in Sokovia, the two discovered that the scepter held a form of artificial intelligence. Tony convinced Bruce to help him use that A.I. to power Ultron, a decision that would soon prove to be disastrous. During the process of building, and the time spent in the lab, they worked diligently together for at least 3 days, sharing banter and lighthearted comments at each other.

Later, while the Avengers fought Ultron's bots in South Africa, Wanda Maximoff used her mental manipulation power to force Bruce to turn into the Hulk and rampage through Johannesburg. Tony equipped his Hulkbuster armor and tried to contain and talk the Hulk down. When that failed, Tony resorted to fighting him. After a lengthy battle, Tony managed to knock him unconscious.

After Clint Barton returned to Avengers Tower with Ultron's unfinished synthetic body, Tony convinced Bruce to help him complete it rather than destroy it, using J.A.R.V.I.S. as its mind this time. As they worked on it, Tony, on multiple occasions, leaned into Bruce's more personal space without any complaints from the latter. Tony then clasped Bruce's shoulder roughly and told him, "We're mad scientists. We're monsters, buddy. You gotta own it. Make a stand," to which they made hard eye contact and Bruce responded, "It's not a loop. It's the end of the line."

When the group learned of Clint's family and house, the two scientists were seen next to each other in multiple shots; Bruce in an oversized long-sleeve shirt and Tony in what seemed to be a normal tight black t-shirt.

Though Steve Rogers and the Maximoff twins tried to stop them, with the help of Thor's lightning, they were able to complete it and create the Vision. Tony and the Hulk fought alongside each other during the Battle of Sokovia.

After being teleported to Earth by Heimdall and crashing through the roof of the New York Sanctum, Bruce informed Stephen Strange and Wong of the impending threat of Thanos. Stephen then contacted Tony for help. Bruce immediately hugged Tony upon seeing him for the first time in years.

Bruce tried to convince Tony to call Steve Rogers to help find Vision, but before he could, Cull Obsidian and Ebony Maw arrived. As Tony showed off his new nanotech he developed during Bruce's time on Sakaar, he turned around and asked him for his opinion on it, saying, "It's nanotech? Ya like it?"

Bruce, unable to turn into the Hulk, was stuck on the sidelines as Tony, Stephen, Wong, and later Peter Parker fought the Black Order. During the skirmishes, Tony told Wong to protect Bruce, making it a point that the physicist was safe.

Bruce and Tony both survived Thanos' snap to kill half the universe.

Tony – “Hey, I read all about your accident. That much gamma exposure should've killed you.”
Bruce – “So, you're saying that the Hulk — the other guy... saved my life? That's nice. It's a nice sentiment. Saved it for what?”
Tony – “I guess we'll find out.”
— First meeting.[2]

“Will you listen to me? That little witch is messing with your mind. You're stronger than her, you're smarter than her. You're Bruce Banner.”
— Tony trying to talk the Hulk down.[3]

The pairing took off after their interactions in Avengers. Many enjoying their dynamic, and how Tony didn't walk on eggshells around Bruce, instead treating him like a normal person. In a lot of fanon, they banter and lightheartedly bicker as they work in their lab(s) for hours or days on end together.

It's widely fanon that since both canonically have trauma/PTSD, both have often come to the other's aid and comforted them be it reassuring touches while the other is having nightmares, or talking it out and venting to the other. There are also extremely-believed fanon/headcanons that, since both went through varying degrees of child abuse, they relate to each other on a more psychologically deeper level than just their shared genius and love for science.

Additionally, there are some minor/more niche fanon ideas that Bruce accompanies Tony to some of the galas he is forced to attend. It's often plot points in those that in doing that, Bruce is breaking out and into society more, and Tony has someone there if things go poorly or awry. 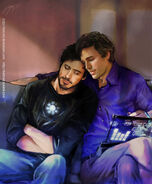 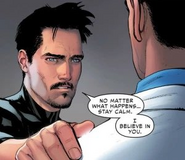 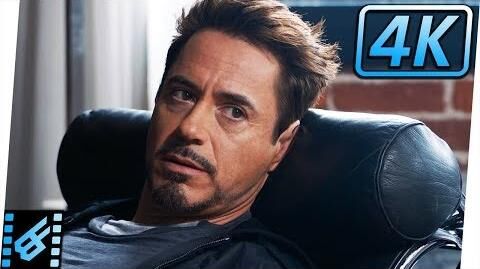