SeroMina is the het ship between Mina Ashido and Hanta Sero from the My Hero Academia fandom.

In the S4 OP, Starmaker, Mina and Hanta are briefly shown as they run, both holding what appears to be supplies for their class’s concert. Both are smiling widely, and can be interpreted as playing a game of tag with the way they chase each other. (A page of the official 2020 calendar heavily resembles this scene).

During the Cavalry Battle section of the Sports Festival, Katsuki selects both Mina and Hanta to be on his team, (alongside Eijiro). They both seem the most hesitant of the group to participate, given Katsuki’s extreme behavior, and Eijiro’s admiration for said (manly) behavior. When Katsuki launches himself into the air, only to get yanked down by Hanta. Mina gives a “weirded-out” glance to Katsuki, and a relatively impressed one to Hanta’s display of strength (catching an entire Katsuki in one arm!) Later, in his aggressive approach to obtaining his stolen headbands, Katsuki introduces his offensive “nicknames” for the two (Mina = Raccoon Eyes , Hanta = Soy-Sauce Face) and utilizes their quirks in a sort of combo move. This shows their quirks have potential together, and that was realized by angry-genius Katsuki. At the end of the event, their team loses, but they seem to be the only ones who truly accept it as good enough, given Katsuki’s screaming and Eijiro’s jokery of his screaming. Post Sports Festival, Mina and Hanta are commonly seen hanging around each other, especially during the other’s work studies, as they casually gossip- and complain about not getting their own.

Both Hanta and Mina react supposedly together upon seeing Shoto’s strangely traditional room, and comment on it together. Later, entering Hanta’s room, Mina yells “WOW!!” upon seeing his impressive decor, and swoons that it’s “exotic” with her hands pressed against her cheek. Hanta looks proud at the praise, and chuckles haughtily at it, calling himself a “wild-card”.

On the way out of class one day, Mina lightly chats with a few friends, giving ideas for starting a potential team up between her and them when the time comes to go Pro. She suggests Hanta “tie her up with his tape”, which evidently, if listened to in a “dirtier” manner, carries a potentially strange meaning, to say the least. Hanta only joins the conversation upon hearing this without context, and seems both embarrassed and intrigued at these words.

Unfortunately, thanks to their rather poor performance in their final exams, the two were assigned to “summer school” rather than a normal experience at the Training Camp. As they eat their (much deserved) dinner upon arriving at the camp, Hanta questions if the rooms the girls are staying in are small. Mina asks if the guys rooms are big, and then if she can come check them out, to which Hanta excitedly replies “Yeah, anytime!!”

Upon deciding special effects for Class 1-A’s concert, Mina makes the suggestion that Hanta uses his Tape to swing Yuuga around like a “living disco ball”. Hanta appears to be amused- and somewhat concerned at this idea. When Mina performs a dance to prove her talent, she calls the class over to watch her. Hanta comes to see, alongside others, and is visibly impressed at the feat she performs, and cheers her on, pumping a hand excitedly when Mina begins to “break it down”. Later, as he watches her (somewhat violently) train the Dance Team to learn a few moves, yelling all the while, Hanta smiles goofily and jokes to Eijiro that Mina’s “a bit of a demon coach!” He watches her all the while as she works.

While SeroMina is arguably Hanta’s most popular ship, rivaling SeroRoki and KamiSero, it is more or less buried by KiriMina, although not by a painful extent. Its general fanbase is notably large, pushing it out of “rare-pair” territory, although not quite into the “very popular” category. As the two remain in the background for the majority of the series, yet are seen together so commonly, this ship slowly rose to prominence. It is most commonly shipped alongside other het ships, or BakuSquad ships, the most popular ones being KiriBaku and KamiJirou. The trio of these ships create an even split of romances in BakuSquad.

A popular thing noticed within fans are the measures of their bodies; Mina is notably curvy, and admittedly short, whereas Hanta is very lanky and tall. The complete difference between their appearances- not even mentioning Mina’s alien-like complexion -gives relative popularity to the couple. 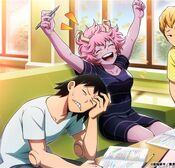 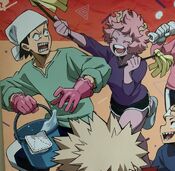 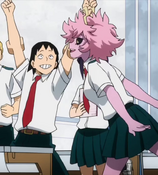 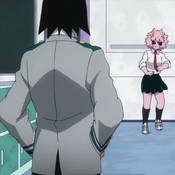 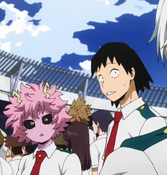 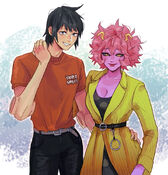 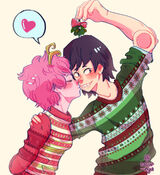 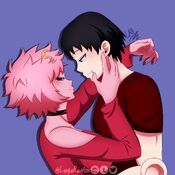