“I know that people fight over the most trivial things. Some people may be selfish, like the professor said... But they're basically good. If they try their best and never give up on their wishes... They always have a reason to be happy. That's why you should help them out... Saving them is a good thing!”
— Amy Rose, Sonic Adventure 2

Shadamy is the het ship between Shadow and Amy from the Sonic the Hedgehog fandom.

Amy and Shadow first meet at Prison Island while the former is trying to break Sonic out and the latter is assisting Dr. Eggman and Rouge the Bat in obtaining the Chaos Emeralds from the island. Amy sees Shadow but mistakes him for Sonic as she runs up and hugs him from behind. Amy realizes her mistake when Shadows turns to her and when she sees Eggman nearby. Eggman orders Shadow to go do his mission while he deals with Amy, though the doctor is interrupted when Tails arrives. The two eventually escape the island before it's destroyed by the explosives Shadow was sent to set.

Much later on in the crisis, while Sonic, Eggman, and allies are trying to stop the firing of the Eclipse Cannon aboard Space Colony ARK, Amy tries to convince Shadow to help out save the world. Shadow rejects the pleas, saying that the world's destruction was what his creator - Gerald Robotnik - wanted and that there isn't even a way to do it. Enraged, Amy continues pleading with Shadow by saying that there are good people that deserve to be saved and be happy. Amy impassioned words suddenly triggers Shadow's memory of the final words of his friend Maria also pleading with him to save the world and bring happiness to them. This finally convinces Shadow to join Sonic and the others in stopping the Eclipse Cannon and his prototype from destroying the world, at the cost of his seeming demise.

Amy and an amnesic Shadow were among the individuals who participated in the hunt for Eggman - in actuality Neo Metal Sonic in disguise - before the launch of his fleet of airships, though under different circumstances. They, along with their respective teams chased "Eggman" separately until meeting onboard the lead ship along with Sonic's group and the Chaotix Detective Agency. Amy and Shadow witnessed Neo Metal Sonic drop his disguise and turn into a monstrous new form before offering Sonic the Chaos Emeralds to defeat it. Shadow's and Amy's teams distracted Neo Metal Sonic until Sonic and friends went Super and ultimately defeated him.

During the Black Arms invasion, Shadow finds himself at one of Eggman's castle bases in order to interrogate him about his true identity. As he approaches, he's met by Amy who was needing his help in finding Cream, who had gone into the castle and hadn't come out yet. Due to his conflicting feelings on his identity during the crisis, Shadow has the option of either helping Amy in the search, helping Eggman in fortifying the castle's defenses, or ignoring both and getting the Chaos Emerald within. Regardless of what Shadow does, Eggman attacks him and Amy in a mech when they find the Chaos Emerald, only for the mad doctor to be defeated. Shadow and Amy would separate after the fight to continue dealing with the Black Arms in their own ways.

Much later, Amy joins Sonic, Eggman, and the others in trying to stop Shadow from giving the Chaos Emeralds to the Black Arms' leader Black Doom, only for the alien leader to take them anyway and use Chaos Control to bring the Black Comet closer to the planet. Amy is then subjected to a paralytic gas that renders her and everyone else, except Shadow, helpless to Black Doom's forces. Amy eventually escapes the Black Comet with the others and witnesses from the ground the final battle between Shadow and Black Doom, cheering the black hedgehog on. As Shadow, in Super form, defeats Black Doom and destroys the Black Comet with the Eclipse Cannon, Rouge is worried that Shadow didn't survive the blast. Amy, however, expresses optimism that he did.

Amy Rose has shown to be somewhat fond of Shadow, having an unusual amount of faith in him when he seems to lack faith in himself. Being a somewhat equally willed person, she tends to help Shadow regain sight of his purpose, and keep him in check. More than once she has realized the good in him when others failed to.

Shadow and Amy's past interactions happened roughly the same way as they did in the games. At a later point, Shadow, along with the rest of Team Dark, reluctantly teamed up with Amy and Knuckles the Echidna to go look for the Master Emerald shards. Amy teased Shadow, pointing out that he was just jealous that he had to work for G.U.N. while Sonic saved the world, to which Shadow smiled slightly in admission.

In another time, Shadow, Rouge, and Omega teamed up against Amy, Blaze and Cream to find the Sol Emeralds. They fought at first, with Shadow taking Amy out with a single blow of her own hammer (having been given orders by Rouge). Due to the angle he was drawn at, it's impossible to know how he felt about this, but after she recovered Amy convinced him that he had promised to save Mobius, so why not help protect other worlds. Shadow took this to heart and later ordered Rouge to hand over the Sol Emeralds.

Shadow and Amy's first meeting is identical to the games: in "Sonic's Big Break" Amy mistook Shadow for Sonic and hugged him from behind, and he smirked at her without comment.

Shadow briefly appeared to Amy and the rest of Team Sonic in Rise of Lyric and Shattered Crystal.

In the first part of "Eggman the Video Game" of the television series, Shadow called out Sonic to fight him. After an initial confrontation with Tails and Knuckles, Amy and Sticks charged towards the edgy black hedgehog. Shadow grabbed hold of Sticks' staff, spun it and its wielder, and threw them aside. He then dodged Amy's hammer and kicked her in the face. Both girls surrounded him on both sides. They charged at the hedgehog, but he was able to teleport in time and reappear behind them. Shadow took them both up into the air and dropped them to the ground. Shadow appeared to Amy and her teammates after they disabled Metal Sonic, threatening to end the world.

Shadamy has a rivalry with Sonamy (for Amy) and Shadouge (for Shadow). However despite having to be the primary rivalry for both of them, it is still a very popular ship in its own right in fan art and fan fiction.

Common rationalisation is that Sonic is too free-spirited to be tied down to Amy, who often talks about having a family, while at 12, Amy is too young to differentiate love from friendship, so when she grows up she will become interested in a man with a more serious and steady outlook on life.

Some fans theorize Silver the Hedgehog as a son of Shadow and Amy in the future. However, this was debunked by Shadow's co-creator Takashi Iizuka.[citation needed] 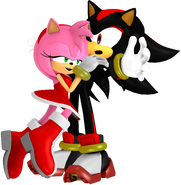 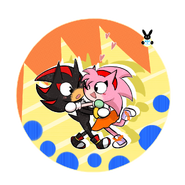 ShadAmy - You Belong With Me

Shadamy - Shut Up and Dance

Shadamy -My Heart Will Go On-

Shadamy~ Bring Me to Life

Shadow And Amy My Immortal

Shadamy - Love the way you lie

Shadamy - angel with a shotgun

ShadAmy- Heaven When You Kiss Me

Shadamy amv- she will be loved

ShadAmy - Listen to Your Heart