Shadarine is the het ship between Shadow the Hedgehog and Marine the Raccoon from the Sonic the Hedgehog fandom.

Shadow and Marine both originate from the games, but never appear in the same games (excluding Marine the Raccoon costumes in the Mario & Somoc series). They do not meet in the post-Super Genesis Wave comics either.

In the Pre-Super Genesis Wave Archie Comics, Shadow was fighting Metal Sonic in the Sol Dimension, but fell into water during the fight. He was rescued by Blaze the Cat and Marine. Marine offered Shadow a towel to dry. Shadow explained how he ended up in the Sol Dimension, after which Blaze and Marine told Shadow how they knew Sonic the Hedgehog. While Shadow and Blaze got along, Shadow was quickly annoyed by Marine.

The three found out that Metal Sonic was attacking Southern Island in his search for Eggman, and the trio teamed up to stop him. Blaze attempted to attack the robot, but it was no use. After the failed attack, Marine jumped on Metal Sonic's back and began hitting his head, but this did not work either. Shadow was unable to attack Metal Sonic when Marine was on the robot's back, but when Marine fell off, he tried to unsuccessfully convince Metal Sonic to disobey Eggman. Following this, Blaze and Shadow damaged the robot and sent it flying in the air. Marine used the cannons of her ship to destroy Metal Sonic.

After the defeat of Metal Sonic, Shadow returned home, and presumably never met Marine again (although he and Blaze had a second encounter).

Shipping the two romantically is very uncommon due to conflicting personalities. There is, however, a DeviantArt user called ShadRine, named after the pairing. It is so rare that only one fanwork of the pairing itself shows up with the "shadrine" tag. 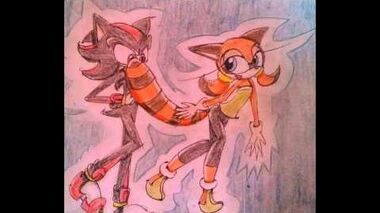 Retrieved from "https://shipping.fandom.com/wiki/Shadarine?oldid=116750"
Community content is available under CC-BY-SA unless otherwise noted.