Shadaze is the het ship between Shadow and Blaze from the Sonic the Hedgehog fandom.

Shadow and Blaze mostly interacted in the Pre-Super Genesis Wave Archie comics. They first met when Shadow was fighting Metal Sonic and ended up in the Sol Dimension. Shadow almost drowned but was rescued by Blaze and Marine. The cat asks if he was related to Sonic, to which he answers in the negative but tells her that he did cross paths with the blue hedgehog. Blaze then shares Shadow her experience with Sonic, which matches that of Sonic Rush and Sonic Rush Adventure. When Metal attacks an island at one of the cat’s home islands, Shadow catches her and feels sorry for bringing trouble to her Zone. The three take turns subduing Metal, with Marine dealing the final blow with her ship’s cannons. With the black hedgehog’s only hope in returning to his world gone, Blaze gives him a Chaos Emerald and wishes him safe travel.

Shadow and Blaze met again when they were looking for Sol Emeralds. While they were against each other at first, they eventually teamed up. At one point, the flame-wielding cat was hurt and Amy ordered Shadow to carry her. Shadow was the one who convinced Rouge to let Blaze keep the Sol Emerald after realizing that it only calls to the Guardian when he tried to use Chaos Control with it.

During Worlds Collide, both were roboticized as Shadow-Man and Blaze-Woman by Drs. Eggman and Wily. Each presented their creators with a Chaos Emerald as completion of their first mission. They, along with a few more roboticized masters, attack Sonic and Mega Man’s team. The blue robot brought them back to their organic forms with the help of the blue hedgehog and Tails. Both Shadow and Blaze felt the after-effects of the Super Genesis Wave, with their histories with Sonic and friends rewritten slightly to match their game counterparts.

Both were called to the Resistance headquarters when Neo Metal Sonic took over Angel Island. They then took care of the Egg Fleet when Sonic and Silver took on Metal. They, among the other major characters in the game, endure pushbacks from the Master Overlord, only to be saved by Silver. They went on their way after Metal returned to normal.

Both also appear in issue 31, but they never interact directly since that cat was already in her home zone when Sonic cleansed his world of the Metal Virus, curing the black hedgehog among others in the process.

No notable interactions happened between the two but they met in a few games.

In Sonic Generations, the two were among the many characters cheering on while the Sonics fought the Time Eater, and later were both seen attending Sonic’s birthday party, although Shadow was not there at the beginning. The two are also playable characters in every game of the Mario & Sonic series, where they can be members of the same team in team sports (except in the Nintendo 3DS version of London 2012, where each event only has one of 5 specific sets of 4 characters, and the two are in different sets). They also both appear as playable characters in spin-off games such as Sonic Dash, Sonic Forces: Speed Battle, and Team Sonic Racing.

Shadaze gained popularity when the pair interacted in Sonic Universe, although it already had prior support. Fan-art and literature featuring the two together are extant, though not much as so than popular rival ships such as Shadamy, Shadouge, Sonaze, or Silvaze.

Shadow and Blaze have similar personality traits, as both are serious, quiet and rarely spend time in the company of others. Though the cat is friendlier than the hedgehog, fans would pair the two so that the former would add more to the latter’s “friendly side”.

The two have apparently interacted before in Sonic Generations. If you look closely in the scene before Classic Sonic jumps through the portal, you can actually see Shadow next to Silver and Blaze, apparently talking to each other. 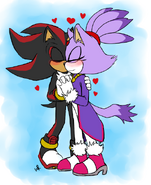