Shadeam is the het ship between Shadow and Cream from the Sonic the Hedgehog fandom.

Shadow and Cream had their first known meeting in Sonic Heroes, although the two were never shown interacting in the game. As Team Rose and Team Dark never encountered each other in a team battle, the two did not meet until the final battle against Metal Sonic. During that battle, both of their teams along with Team Chaotix fought Metal Madness while Team Sonic prepared to transform into their super form.

In Shadow the Hedgehog, Shadow rescued Cream and Cheese in Cryptic Castle when Amy requested Shadow to find them in the Hero mission. After that, Shadow told both Amy and Cream that if they wanted to stay clear of trouble, they'd better stay away from Eggman. Later, Cream wished Shadow good luck in the Expert Mode levels of the ARK, Cosmic Fall (alongside her pet Chao), and The Last Way (alongside her other allies and Eggman).

In Sonic Generations, Cream was sucked into the time-space void with the other main characters of the series while Shadow did not appear at first. Sonic (or his Classic self) freed the rabbit and her pet Chao when Speed Highway was fully completed, then later Modern Sonic had a rival battle with the black hedgehog. Both appeared cheering the Sonics on in their battle against the Time Eater. Once everyone got back, Shadow and Cream attended Sonic’s birthday party.

Cream has also appeared with the hedgehog in some other games. In Sonic Chronicles: The Dark Brotherhood, the two could appear as Sonic’s teammates, although any interactions between the two were optional. In Sonic Free Riders, their respective teams were rivals, and potentially competed in the final round.

Both characters have appearances in spin-offs as well. In the Mario & Sonic series, Shadow is a competitor and Cream is a referee in most games. The rabbit is absent in Sochi 2014, but is a member of Team Sonic during the Beach Volleyball event in Rio 2016. Both are collectibles in the Super Smash Bros. series.

Cream was at home when she learned that Sonic was wanted for Shadow’s actions. The rabbit, along with the other major characters, encouraged both hedgehogs when they fought the Final Lizard and Space Colony ARK was about to enter the atmosphere. Both have little interactions in the Metarex saga as Shadow’s initial objective was to keep Cosmo away from Cream and her friends. In the last episodes, the rabbit witnessed Tails firing the Sonic Power Cannon and with it, Sonic and Shadow using their full strength to defeat the Metarex at the cost of Cosmo’s life.

Shadeam is a rare but well-known ship in the fandom, as both characters have a large age gap and had little interactions in canon. This often involves an older version of Cream, while Shadow remains ageless. It is superseded by ships like Shadamy, Shadouge, Taiream, Chaream, and even crack ships like Soneam.

As of January 2022, nine fan-works (romantic), as well as six (as friends or “father-daughter”) have been written on Archive of Our Own. This pairing is more noticeable on the fan-art. Notable artists of this pairing include LuckyClau, RoadOfDawn, and LucianoLenz.

Those who pair the two want to combine the strength, speed, ability of flight and agility to defeat their rivals or as a show-off. Others want Shadow to raise Cream as if she was his own daughter, with or without the rabbit’s mother’s approval.

Recently, an alternative of Shadow adopting Cream rose when two YouTubers named Tails and Sonic Pals (aka BunnyChan VA) and Emerald Masters promoted voice-acting of two characters together. In this way, fans would opt an alternative universe where, given Cream’s unknown father, Shadow would teach her how to be an independent rabbit or train in the ways of G.U.N. One animation dubbed by both channels shows Cream showing off Shadow’s gun to her mother and the hedgehog lauding the young rabbit’s bravado. 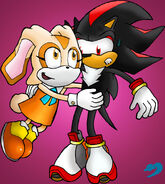 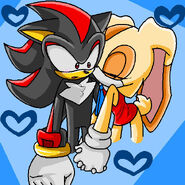