Shadikal is the het ship between Shadow and Tikal from the Sonic the Hedgehog fandom.

The two do not meet in canon events. In Sonic Adventure 2, both are playable in multiplayer, but they cannot meet as Shadow is a runner while Tikal is a treasure hunter. Both are also playable in Sonic Runners, a now discontinued mobile app, but do not have any interactions. Shadow and Tikal also have counterparts in Sonic X and both Pre- and Post-Super Genesis Wave Archie comics, but their main reality versions in any of them are not shown to meet.

In the Light Mobius universe, King Shadow used Tikhaos, a merged form of Tikal and Chaos, to fight against the Freedom Fighters. Shadow fed it an excessive amount of Chaos energy, resulting in it losing control and wreaking havoc. Shadow's plan was eventually ruined as the Freedom Fighters defeated Tikhaos, while the black hedgehog escaped the encounter.

Shadikal is a fairly popular ship, but with many notable rival ships especially for Shadow. It can be shipped alongside Knuxouge as parallel to the popular ship combination of Shadouge and Knuxikal. Tikal's personality could remind Shadow of Maria, his closest friend, as both Tikal and Maria are peaceful, gentle and unwilling to fight. Shadow's personality is more violent, similarly to Tikal's father, but Shadow deeply cared about Maria while Pachacamac valued victory in war over his daughter. The ship also has a theme of light and dark to it, with Tikal representing light and Shadow representing dark.

On AO3, the pairing has twelve fan works, making it the most written ship for Tikal on the website. As the Sonic fandom is not very prominent on AO3 and based on the small number of fanworks for Tikal ships on the website, this might not reflect the actual popularity rankings of Tikal ships. It might be among the top 10 romantic ships for Shadow on the website, but this is not confirmed.

The ship also has material on many other websites. On Tumblr, there are many posts with the Shadikal tag, usually featuring art of the two. On Wattpad, there are seven stories using the Shadikal tag, although most of them are not centered around the ship. There are also multiple YouTube videos of the ship with hundreds, thousands, or in the case of a few, tens of thousands of views. 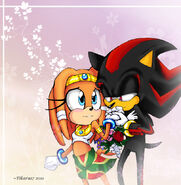