Shadouge is the het ship between Shadow and Rouge from the Sonic the Hedgehog fandom.

The two have transitioned from teammates-of-convenience in Sonic Adventure 2 to one anothers' closest allies as the Sonic franchise games have progressed. Shadow is one of the few people Rouge expresses concern over and seeks out, while Rouge is one of the few people Shadow accepts help from and expresses gratitude toward. They are usually seen teaming up to save the world or in their line of work as G.U.N. agents, but are sometimes seen teaming up for more personal goals and competitions.

In Sonic Heroes, Rouge accidentally finds and then releases an amnesiac Shadow from his comatose state in Dr. Eggman's lair. The two team up with E-123 Omega for the rest of the game, but Rouge does not let on that she knows anything about Shadow's past, even when expressing concern for Shadow's reaction when they encounter clones or robots of him. This team continues into Shadow the Hedgehog.

In Sonic Battle, Rouge goes out of her way to help him and carries him back to Club "Rouge" to recover when he passes out from injuries, despite complaining about how heavy he is. A confusing line for fans comes when she comments that he "isn't bad looking, but...", more likely referring to his injuries than his looks. When he wakes up and goes to leave Rouge is indignant that he doesn't thank her, saying that he's just like all men. Shadow pauses and thanks her genuinely.

Towards the end in the English version of Sonic the Hedgehog, Rouge tells Shadow she would be on his side even if the whole world turned against him. In the Japanese version, she only says "You have friends you can rely on"; which, by default, includes Omega who is also in the scene.

Rouge and Shadow cheer on the Sonics at the climax of Sonic Generations.

Rouge has flirted with Shadow a number of times, and has displayed interest in him since he saved her live on Prison Island. Rouge has called Shadow "handsome" from time-to-time. Like Knuckles, Shadow does not often accept her flirtation and other times, he simply brushes them off, but Shadow tends to smile around her often and does care for her well-being. Rouge also occasionally teases him by saying he mopes too much.

They have demonstrated a strong connection with each other, transcending their status as teammates; Rouge is deeply concerned for his welfare. During the erased events of the timeline where they engaged Mephiles, she swore to always stand by him. This does not mean that she does not at times find him infuriating, though she is not above making jabs at him. Despite this, she does care deeply about him, and seeks to help him in whatever circumstances.

They didn't work well at first. However, during their partnership, Shadow and Rouge started to cooperate with each other better. Thus, Rouge is the closest person Shadow has had since Maria passed away. Proving that despite their occasional conflict, Shadow and Rouge genuinely respect and care for the well-being of one another.

Shadouge is a popular ship among the Sonic the Hedgehog fanbase. Its greatest rivaling ships are Knuxouge (for Rouge) and Shadamy (for Shadow).

This pairing is favored by some fans over Knuxouge for how their connection has developed over the course of the games into being one another's closest allies, and for interacting much more than Rouge and Knuckles do. Others say that Shadow and Rouge are close friends in the sense of being like brother and sister. Their interactions are interpreted differently by fans.

Some fans theorize Silver the Hedgehog as a son of Shadow and Rouge in the future, with a DeviantArt group dedicated to this formed on August 2015.

Shadouge on the Sonic the Hedgehog! Amino
Shadouge on Urban Dictionary 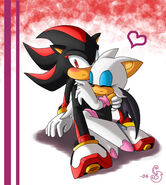 by y-firestar
Add a photo to this gallery

Shadouge AMV- She Will Be Loved

(AMV) Shadouge - Gotta Be Somebody

Shadow and Rouge Who Knew
Add a photo to this gallery

Retrieved from "https://shipping.fandom.com/wiki/Shadouge?oldid=254782"
Community content is available under CC-BY-SA unless otherwise noted.