Back to page
View source

• Heroic B.S.O.D — In season 6, Lance breaks down in tears after finding out what happened to Shiro.

Shance is the slash ship between Shiro and Lance from the Voltron: Legendary Defender fandom.

THE RISE OF VOLTRON

After a failed flight simulation, Lance suggests a “team bonding” exercise. He and Hunk find Pidge outside listening to “alien radio chatter,” when a ship is seen falling through the sky, before crash-landing. All three go to investigate when they notice it’s Shiro who crashed. Upon seeing Shiro, Lance exclaims, “That's Shiro! The pilot of the Kerberos Mission! That guy’s my hero!” With Lance being “properly motivated,” he thinks of a plan to rescue Shiro. Large explosions go off in the distance, and Pidge uses her binoculars to see a man, deeming the explosions to be a distraction for him. Lance takes notice of it being Keith running for the quarantined tent containing Shiro. Lance runs after him. Once inside the tent, he pushes his way through, saying, “Nope. No, you- No, no, no. No, you don't. I'm saving Shiro.” With Keith’s help, Lance carries Shiro back to Keith’s hoverbike.

The morning following the rescue, everyone is inside Keith’s shack. Shiro turns to thank Lance, extending his alien prosthetic, saying, “Lance, right?” Lance is hesitant at first to take Shiro’s hand, but soon does so with a smile.

With Hunk having made a “Voltron Geiger Counter,” it isn’t long before the Blue Lion is discovered. As the group is making their way for it, Lance asks of anyone else “gets the feeling it’s staring at them.” Shiro is the only one to tell him, “No.”

The Blue Lion is now with group and they’re spotted a Galra battle ship. Lance manages to fly them out of immediate danger which gains him praise from Shiro, telling him, “Nice job, Lance!” The Blue Lion “feeds” the idea of traveling through a wormhole. As Shiro is the “senior officer,” Lance looks to him for what they should do. Following Shiro’s instruction, the group goes through.

Once on planet Arus, having met Allura and Coran, and then having retrieved the Yellow and Green Lions, Commander Sendak opens a video communication to Allura, threatening he’ll destroy the planet. Allura is quick to remember that the castle has a particle barrier, to which Lance attempts to flirt a bit, but is cut off by Shiro sternly saying his name.

During a celebration party being held in the castle, an explosion goes off and Lance is severely injured protecting Coran. Shiro and others run where the bomb went off to see Lance and Coran on the floor. Upon seeing Lance, Shiro immediately runs to him, cradling him in his arms. Shiro comments, “He doesn’t look so good…” With the castle down and needing a new crystal and with the Arusian village under attack, the team spits up. Shiro stays back at the castle to tend to Lance. As Shiro is walking with an unconscious Lance, he sees Sendak approaching the castle’s entrance. Shiro tenderly lays Lance down before running out to meet Sendak.

Shiro ends up losing in his fight with Sendak as Sendak’s partner, Haxus, uses Lance: “Let him go, or your friend won’t make it.” With Shiro distracted with Lance’s wellbeing, Sendak hits Shiro, causing him to land next to Lance. They’re then both dragged away to another room.

With the help of their teammates, they’re saved and Lance is placed in a healing pod to fully recover.

The team travel to the Blade of Marmora’s base with the coordinates given by (former) BoM member Ulaz. They contact the Blades, with them allowing only two people access. As Shiro walks over, Lance asks him who’s going on “this little mission,” as things might get hot, so he’ll need someone who can “stay cool.” Shiro agrees, and then turns his attention to Keith, saying, “Keith, you’re coming with me.” Lance is shocked, and he starts listing reasons why Keith wouldn’t be the right one for the mission, all while getting in Shiro’s face, believing he’s better suited to partner with Shiro. Shiro places both hands on Lance’s shoulders and pushes him back. With that, Shiro and Keith leave for the base.

A plan is created to defeat Zarkon, though there is much preparation that needs to be done first. Lance flies Shiro, along with Pidge, to a fortified prison holding genius inventor Slav. One the way, Lance tells Pidge he’s an “excellent shot,” which as Pidge questioning, “…You are?” Lance tells her, “Yes, it’s my thing!” Pidge loudly tells him, startling Shiro, “Since when?!” Lance ignores this and opens the Blue Lion’s mouth to drop Shiro and her off at the base while he finds a place to land the Lion. Once Lance is inside, he meets up with them and Shiro greet him, “Okay, faze two complete. Welcome to Beta Traz.”

Pidge makes for the control room, with Shiro and Lance looking to her guidance on how to proceed. She tells them they’ll have to hook her up when on the level three floor. With that, Shiro and Lance head for the floor level. They comes across a paroling droid when Lance asks how they’re going to get by him, Shiro doesn’t answer, but merely attacks, leaving Lance smiling, “Good teamwork on that one.” Being on level three, they part ways, giving Pidge access.

Once Lance has the Yupper (believing it to be Slav), he tells the beast, “And Shiro’s our awesome leader!” Remembering how Pidge reacted to him being an “excellent shot,” he starts to question whether or not his “has a thing” like his fellow teammates do.

With Shiro having Slav, the team head for the hangar bay where the warden of the prison attacks them. Slav manages to open the hangar gate, sucking them out into open space, unfortunately Slav is grabbed the warden. Lance aims his rifle, shooting the warden’s arm, releasing Slav from his hold. Shiro looks to Lance, proudly telling him, “Nice, Lance! That’s why we bring our sharpshooter!” Throughout Lance’s insecurities during the mission, Shiro is the one to make him feel better and feel he’s worthy of being on the team.

The Rise of Voltron

Fall of the Castle of Lions

Defender of All Universes

“That’s Shiro! The pilot of the Kerberos Mission! That guy’s my hero!”
— Lance, The Rise of Voltron.

“I’ll tend to Lance and keep watch over the castle.”
— Shiro to Allura and Keith, while cradling Lance in his arms, Fall of the Castle of Lions.

“Hang on, buddy. Help is on the way.”
— Shiro to an unconscious Lance, Fall of the Castle of Lions.

“Nice, Lance! That’s why we bring our sharpshooter!”
— Shiro to Lance, Escape from Beta Traz.

“But good work today. I'm sorry I yelled at you earlier.”
— Shiro to Lance.

〉What I do know, this that these heroic men and women… and Lance.〈
—Shiro, Shiro's Vlog.

Though not as popular as Klance or Sheith, Shance does have a fairly large following in the Voltron fandom. Fans of the ship theorize that Lance’s hero-worship of Shiro is indicative of a crush, one that could possibly become requited love eventually.

The Shance fandom’s favorite phrases are “that’s why we bring our sharpshooter” and “Give love a Shance.”

Since the release of Shiro's Vlog, when Shiro says, “What I do know, this that these heroic men and women… and Lance.” a sparkly-like sound can be heard afterward. Fans have come to believe that Lance is the one filming Shiro and Shiro is acknowledging him. 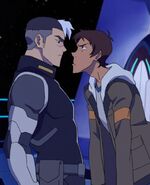 “Nice, Lance! That’s why we bring our sharpshooter!”