Shardicole is the non-binary ship between Shard and Nicole from the Sonic the Hedgehog fandom.

Both characters appear in Sonic Universe issue 50, where they are playing holo-chess in Nicole's handheld computer. Shard uses his cannon to fire on a giant pawn, and declares a check after "taking" it. Nicole walks toward Shard and checkmates him. Shard asks for a rematch, in which the holographic lynx quickly accepts.

Nicole states that Shards visits her network often, suggesting him to enjoy the real world for a while. Shard replies that he is not ready to do so, as it is hard to socialize being a member of the Secret Freedom Fighters and a killer robot. She replies that he is a reliable and trustable team member, which leads to a brief exchange of their differing opinions about their trust with the other citizens of New Mobotropolis. As Shard reflects on how someone could make perfect coding on some one, they get interrupted by a unexpected message that Metal Sonic 3.7 attacking the town and is holding Antoine hostage. Shard then flies off to the hospital, where Metal was going to finish off the comataose coyote. Shard challenges Metal, sparing the latter's intended target.

Shard and Metal 3.7's battle goes to the Great Wastes. Shard mumbles "If I'm going to protect her... everybody... sorry 'brother', but I've got to put you down," likely implying he will defeat Metal for Nicole's safety and that of those who even doubt their trust on him. As Metal 3.7 gains the upper hand, Shard attempts to take the former's Power Gem core. Compromised, the blue metal hedgehog self-destructs, severely injuring Shard. Lying down helplessly, he calls Nicole for help. She dispatches agents to Shard's location. Shard warns her about Metal Sonic being more just a weapon, and was also about to say something personal to Nicole. The final communication (that can imply as the black robot's personal feelings for Nicole) was cut off, leaving his fate uncertain.

These two characters may not be the most popular characters in the Sonic fandom; however, this ship has a large following. Fan works begin to appear after the release of Sonic Universe issue 50, their only known interaction together. A fanclub on DeviantArt with this ship in mind was set up about a month after the issue's release.

One notable DeviantArtist is Galaxynite, who has making fan art of this ship since 2015. She also founded the Shard-X-Nicole fanclub later that same year, and has been hosting annual Shardcole art contests since 2017.

Some fans interpret Gemerl as Shard's Post-Super Genesis Wave counterpart or reincarnation, both having the same color scheme and personality. A short comic by Chauvels provides such an example. 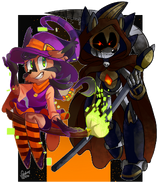 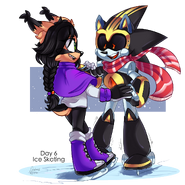 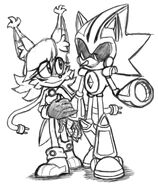 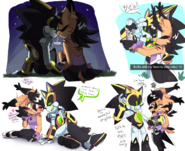 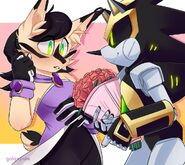 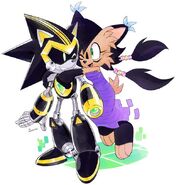 Meticole - the ship between Nicole and Metal Sonic from the games