Shendak is the slash ship between Shiro and Sendak from the Voltron: Legendary Defender fandom.

Sendak and Shiro know of each other from Shiro's time as a prisoner. Shiro sees Sendak again a couple times via video communication. Though the first time they come into direct contact with each other is when Sendak and his team infuriate the castle defenses. Shiro says Sendak's name before running out the castle's entrance to him. They soon engage in battle. As they come to a standoff, Sendak's partner, Haxus, tells Shiro to let Sendak go or Lance won't make it. Shiro turns his head to see Lance collapse to the ground. Sendak sees this as an opportunity to hit Shiro sending him hard to where Lance lays.

Sendak is defeated and placed in a pod, unmoving. The team works to extract information from him. When Sendak gives no signs of a reaction, members of the team start to go off and do their own thing. Shiro is soon the only one left, watching Sendak closely. He leans his forearm against the pod, demanding Sendak tell what he knows, as he has “all the answers.” Shiro calls him a “broken solider,” this getting a reaction out of Sendak. Shiro smiles to himself, noting that Sendak can hear him. Shiro asks him questions, first about Sendak himself then about Zarkon. Sendak explains how him and SHiro are alike, how they're both a part of the Galra Empire. Shiro quickly tells him he's nothing like him. The more Sendak speaks the more Shiro breaks down, to the point where he yells and punches the pod, cracking it. Sendak suddenly moves his face causing Shiro to panic and eject Sendak into deep space.

During a last ditch effort to save Earth, Shiro infiltrates Sendak’s ship and destroys the crystal powering it up. As the ship is now in a free fall for the Earth’s surface, Sendak goes to investigate. He sees Shiro running down and yells, “You!” They stare at each other for a moment before engaging in an intense battle. The two are almost evenly matched with Shiro being able to counter Sendak’s attacks. At one point Sendak gets frustrated at this, telling Shiro, “Every ounce of my being will be directed toward the destruction of you and your pathetic planet!”

The paladins have completed their own task, when they notice Sendak’s ship falling. All five race towards it, attempting to direct it outside the city. The ship crashes on the Earth’s surface and Shiro is left on the ground, too weak to move. Sendak stands over him, telling him one last time, “Victory or death.” Before he can deliver a fatal to Shiro, Keith appears and slices through him, saving Shiro and killing Sendak.

Shendak is one of the fandom's most popular–if not the most popular–hero/villain paring, with 170+ works on AO3. Given Sendak's mean-spirit, non-con is often found in fan works of them. 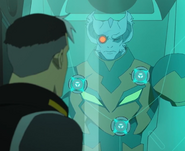 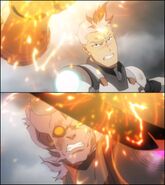