ShigaDabi is the slash ship between Shigaraki Tomura and Toya Todoroki from the My Hero Academia fandom.

Tomura and Dabi are two members of the League of Villains and they both have quite similar backstories and motivations⁚ they both had Quirks that they couldn't control in their childhood and changed their hair color, they come from rich and heroic backgrounds, they had an abusive father, they had close relationships with their siblings, they came to hate hero society (for different reasons) and both wish to finally destroy the pillars of hero society to prove that there are no true heroes.

The first time they interacted was when Giran took Dabi and Himiko to meet Tomura and at first, the two villains hated each other. In fact, they both tried to kill the other the first time they met. Dabi felt disgust towards Tomura, and in return, Shigaraki considered Dabi to be a rude individual with no manners. Despite their attempt at killing eachother, Dabi follows Shigaraki's commands with little to no complaint, and Tomura considers him to be a valuable ally, even going as far as to give him his own Nomu and naming him leader of the Vanguard Action Squad.

Despite the rocky start, Dabi follows Tomura's orders as shown when he works alongside other villains to kidnap Katsuki Bakugo during the camp. Tomura regards Dabi and the rest of the Vanguard Action Squad as 'reliable comrades'. Dabi is one of the only members actively trying to recruit more members into the league, despite burning most of them to a crisp when he sees them as non-worthy.

Despite following Stain's will at first, it becomes evident that Dabi is taking to Tomura's way of thinking. When Snatch mentions the many victims Dabi burned to death, the latter seems proud of himself, claiming to be flattered by the fact that people are talking about him, going in direct contradiction with the Hero Killer's mentality and showing much more resemblance to Shigaraki's way of thinking.

When the League faces Gigantomachia, Dabi refuses to fight, claiming that he has a valuable ally waiting. Shigaraki allows him to avoid the fight, asking for him to bring back said asset. Later on, Dabi seems to follow Shigaraki's cues and goes all out on the remaining Meta Liberation Army members upon seeing Shigaraki do so.

Shigadabi is one of the most popular ships for the two villains, having reached over one thousand fanfictions on AO3. Dabi is often portrayed to be the flirtatious one of the two in the relationship, while Shigaraki is mostly awkward about the whole thing and sometimes even reluctant. A lot of the fanfictions involving the ship also revolves around Dabi being Todoroki Touya.

Most of the works involving them as a couple is explicit in nature due to the two being villains. Their relationship is often portrayed as something they can hang onto, not knowing when they'll die. 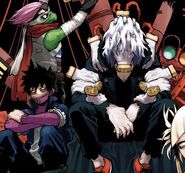 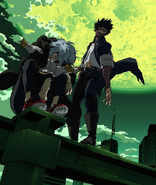 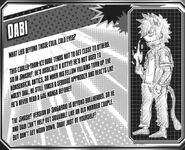