Shinnaga is the het ship between Angie Yonaga and Korekiyo Shinguji from the Danganronpa fandom.

Although the two share an interest in certain areas of culture, those being art and religion, they rarely interact with each other. Angie didn't invite Korekiyo to her Student Council. It can be assumed she was aware that Korekiyo, as an anthropologist, knows how cults are started; or that she believed Korekiyo wouldn't give up his desire to leave the academy easily.

Korekiyo was among the students who understood that Angie's Student Council was based on brainwashing, and had no interest in joining them regardless as he stated he does not believe in gods. Nevertheless, Korekiyo considered Angie an admirable friend for his sister and murdered her after she witnessed his other murder plans. During the trial, when he was suspected and began to panic, he appeared annoyed and asked how long they're going to bring that up after Himiko once again mentioned Atua.

During the non-canonical bonus mode Ultimate Talent Development Plan, Angie had a very unusual reaction after Korekiyo stated that he is interested in Atua solely from critical and anthropological point of view. Angie then told him that Atua's business hours are closed for the day, clearly not wishing to have a follower who isn't actually religious. However, Angie then returned to her usual passive aggressive cheerfulness and reminded Korekiyo that he should pray in order to not face judgement.

“Angie...whatever are you planning to do with that? Are you...actually planning to perform the ritual? You do know it's a motive, yes?”
— Korekiyo asking Angie about what she plans to do with the Necronomicon.

“Kehehe... Angie has spread her influence before we'd even realized. But it makes sense if you think about it. This place has all the conditions for a cult to form.”
— Korekiyo about Angie's Student Council and her brainwashing half of the group.

“Even so, we cannot defy her right now. Extreme faith is frightening, indeed.”
— Korekiyo about Angie's "cult" formed in Chapter 3.

Angie – “Hm? How long have you been standing there, Kiyo?”
Korekiyo – “Mm...I've been here for some time. I didn't wish to interrupt your prayer.”
Angie – “Nyahahahaha, thanks for being considerate! Do you want to join me, Kiyo? Atua has spoken... If you convert now, you'll get a great deal on some exclusive services.”
Korekiyo – “Hmm...I think I shall decline for now.”
Angie – “Hmmm... For now? This offer will not last forever, you know.”
Korekiyo – “How can I believe in your god when I barely know anything about him? His origins, his doctrines, the ways in which he is worshipped... I can infer some from your words, but I have yet to hear a proper explanation.”
Angie – “I see, I see... You have a genuine interest in Atua beyond mere worship... Cuz you are curious about Atua, right? That is what He is telling me.”
Korekiyo – “Yes. I am curious as an anthropologist. Is it a problem if that's why I'm interested?”
— Korekiyo expressing interest as an anthropologist in Angie's made up god.

Angie – “Hmmm, I would like to say that all are welcome, but... Atua's business hours are closed for today. Too bad.”
Korekiyo – “I see. That is unfortunate.”
Angie – “You know, if you want to hear the voice of Atua...you must pray. Atua brings salvation, but only to those who believe. Those who do not will face His judgment, you know.”
Korekiyo – “Kehehe...how scary. I shall have to rein in my academic interest to avoid your god's wrath.”
— Angie attempting to manipulate Korekiyo into joining her cult.

The ship sailed as a result of the two being polar opposites, with Angie acting religious, although in reality using God as an excuse for her own gains (as pointed out by Korekiyo, Maki and Izuru), and Korekiyo being an atheist who's still interested in religious culture as the anthropologist. Their talents are considered matching as well, as Angie is an artist and art is a part of the human culture that Korekiyo is interested by as an anthropologist. His interest in other cultures, and lack of extensive international travel due to frequent hospital visits, would be another reason for them to interact and become closer--as Angie's the only foreigner in his class, with a vastly different islander culture of which he'd likely want to study.

Despite their differences, however, the two of them share similarly unflappable dispositions and a tendency towards unusual behavior, and it isn't uncommon to portray the two of them partaking in activities that most of the rest of the cast might find strange or off-putting. This sort of behavior is often expounded on in alternate environments where the stressful factors of the killing game are no longer in play and the two of them are more relaxed.

They are the only ones who adamantly protest leaving the death game or simply don't have qualms with it, while every other participant tries desperately to escape by any means necessary. Angie wishes to turn the prison into a perfect utopia, enforcing everyone get along and end the killings, while Korekiyo (with nothing left for him on the outside) simply wants to observe how humans react in a death game, both of them seemingly excited about their newfound conditions in differing ways. This also makes for a pacifist x serial killer dynamic, though Angie somewhat teeters in that aspect.

Being the weirder lot in their class, they also share similarly lonely childhood upbringings that resulted in their weird quirks now, depending on common interpretations. (Angie states her loneliness in her FTEs, and Korekiyo's closest, if not only, bond was with his sister, which both outcasted him and left him entirely alone after her death) They share the complex coping mechanism of another identity in their head they're attached to; Angie depends on her God's inner voice for her every desire and to combat her loneliness, and Korekiyo developed a sister personality he's emotionally dependent on. In any interpretation of their characterizations, they both seem to be speaking for two.

However, as with many other Danganronpa ships like this, their canonical status as a victim-killer duo put off some fans, especially after the reveal that Korekiyo killed Angie for his beloved Sister, it is still one of the most popular ships for both characters, particularly Angie. Although in Korekiyo's case it's rivaled by Amaguji. Fans would often end up shipping these two if they don't want Angie to get in the way of Tenmiko. 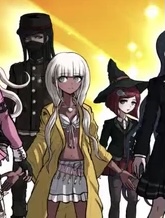 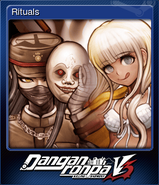 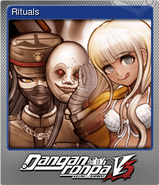 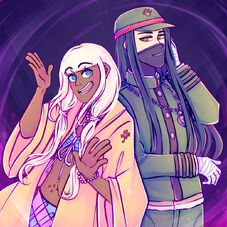 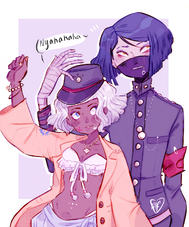 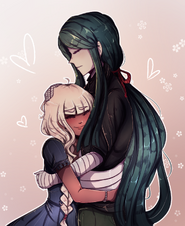 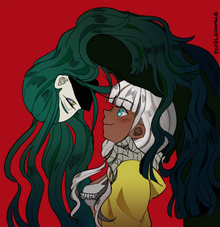 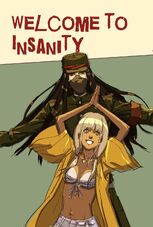 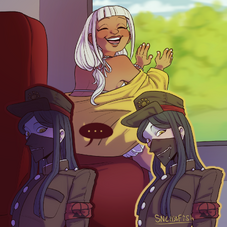 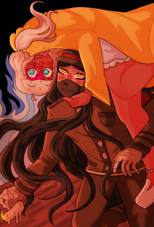