Shinofei is the femslash ship between Yanfei and Kuki Shinobu from the Genshin Impact fandom.

Prior to the Perilous Trail questline, Kuki and Yanfei had no in-game interactions together, but did share an acquaintanceship and brief time together when they shared similar circles at Liyue's Tongwen Academy. In Yanfei’s voice lines, it is revealed the two met when Shinobu came to study law in Liyue as an exchange student. Yanfei comments that she believes Shinobu would be a great lawyer and how she wonders about how she’s doing. In the questline itself, it's revealed that Yanfei acted as a substitute teacher in a class that Kuki attended. Kuki went on to say that, even then, she considered Yanfei as her 'senpai' and someone she looked up to.

Curious after the events at The Chasm, both Paimon and the Traveler decide to return to where they found the mysterious Chasm Nail. When they arrive, they find Yanfei looking towards it. Yanfei is surprised to see the two and tells them she's on important business and that if anyone is looking for her, to pretend they didn't see her. Soon after she leaves, Arataki Itto and Kuki Shinobu arrive, the former looking for Yanfei.

Shinobu reveals that she had returned to Liyue to pick up her graduation certificate from Tongwen Academy as she had been unable to as she was at home when the Sakoku Decree had been enacted. Itto had gone along with her for her "safety", only to get into a brawl with the Millelith before Yanfei got him out of the mess he caused. After slyly getting Paimon to reveal that they knew Yanfei, Shinobu gestures towards the Traveler to misdirect Itto.

After sending Itto off, they head to the ground below the nail and find Yanfei. Just then, a mysterious woman arrives, who's introduced to the two as Yelan. After, Itto and Shinobu follow suit, upset that the Traveler had deceived him. Yelan tells the two to leave for their own safety as the Chasm isn't a place for people to be wandering around in, but Itto takes offense to her attitude despite Shinobu's advice to deescalate the situation. As the two prepare to fight, the ground beneath them cracks and sends them falling down into The Chasm's Bed.

As the group goes about to ascertain their surroundings, Yelan heads off to figure out where they are. They soon come across a strange portal and Yanfei recognizes the rocks around it are extremely old Liyue Mountain Rocks. Yelan then hears someone behind them, who ends up being Xiao; after telling them why he's there, he leaves shortly afterwords. The group spreads out to look for more potential exits after clearing the domain but are unable to find any, while Yanfei notes that the ceiling above seems to have sealed up completely. Yelan tells the group to mentally prepare themselves for a potentially long stay underground.

Itto, Yanfei and Shinbou then join in and the group realizes that since they've been stuck inside, they haven't felt hungry, thirsty or tired at all. Yelan then calls the group over, having found another path that was hidden behind illusory magic. They enter the Domain within and explore it. As they do so, they hear Xiao talking to someone and he appears to be struggling, prompting them to assist. Upon solving the puzzle, a mysterious door appears and the group convenes there, only for a rift to appear. They chase after Xiao's illusion briefly, but are unable to find him.

The group encounters a door which Itto tries to open with brute force, only to notice a switch and embarrassingly opens the door with it, it a trap that reveals their personal fears. Itto then decides to have someone else go in, of which Shinbou volunteers and finds herself in a prior conversation with her mother who wanted her to become a shrine maiden. Yelan declines, but Yanfei then goes in, only to witness a civil dispute. They witness the Traveler's own fears before they managed to find a mysterious device that Yanfei had been searching for.

Paimon soon becomes tired and hungry, causing the group to realize that the domain is targeting their weaknesses and thus they retreat back to camp to regroup and replan. There, Yanfei talks to the Traveler in private, wanting to rescue Xiao before it would be too late, which they're able to do. After a good rest, Xiao explains that he is looking for his missing brother-in-arms, Bosacius, and believed that he was inside The Chasm. Xiao's testimony about domain's chaotic nature confirms Yanfei's theory that the domain is an antlion's den, using illusions to slowly entrap their victim. Xiao proposed that he'll used up his powers to get the group back to the surface at the cost of him being left behind, which the others vehemently oppose. Ushi informs Itto of the argument, in which he decides to punch open a path to avoid unnecessary sacrifice, although he ends up expending all of his strength in the process. Staying behind with her boss, Yanfei casts a spell that protects both her and Itto.

The new path that Itto blasted has led to not only Yanfei's objective in the first place, finding the Fantastic Compass from the client's will, but also finding out the information about the missing yaksha who was with a missing Millelith and one of Yelan's ancestor, Boyang. Reading the fate of Boyang's life had scared Paimon into knocking the Fantastic Compass down, but as soon they moved to pick it up, it reacted to Yelan and Xiao's energy. Yanfei realized that from the compass is an exorcism catalyst made to repel demons using human's magic art and adepti's power combined. And by their theory, the Compass can bring the group to the Surface, but since the compass is an illusion created by the space, they cannot take it with them outside.

Activating the Compass unleashed a floating platform that began climbing towards the Surface. While Xiao was busy maintaining the energy flow, this attracted malevolent forces that tried to snare the group back into the Depths. The group fights together against the forces trying to drag them down, and Yanfei especially fights to protect Kuki while the latter is preoccupied with an unconscious Itto.

After escaping, Itto wakes up and realizes that he missed the show. While Yelan left, Yanfei decided that for all the trouble she caused, she'd invite Arataki and Shinobu for a tour in Liyue.

“Shinobu? I remember her, she's the Inazuman girl that came to Liyue as an exchange student to specialize in law. When she was doing her coursework, she used to meet with me to discuss some cases, and after we were done, she'd always bow and thank me, which would always make me a little embarrassed. I always felt like she was going to make an excellent lawyer in the future. Thinking about it, Inazuma went into lockdown right around the time she would have graduated. I wonder how she's been doing since she went back... ”
— Yanfei about Kuki Shinobu

“Back then I had an argument with my family and I only wanted to run away as far as I could. So, I went to study law in Liyue, but thanks to this experience, I got to meet Yanfei. She's like a walking law encyclopedia. Huh? Me? I have a certificate but there are a lot of restrictions for practicing law... It's not really the right field for me.”
— Kuki Shinobu about Yanfei

Shinofei is currently a very new ship, but since the release of Shinobu’s occupation as the Arataki Gang Deputy Leader, comparisons were drawn between the two law-abiding women. Fans enjoy their look together. The ship is rivaled by YanTao, the ship between Yanfei and Hu Tao. The pairing came into being because of leaked voice lines from Yanfei about Shinobu. Fans found the prospect of them studying law together quite cute, and Yanfei’s bubbly personality contrasted Shinobu’s predicted “down to business” tone. This ship also plays into the pink and purple femslash troupe becoming more popular in media.

Yanfei’s tendency to talk a lot and go on long rants about laws can be seen as annoying by some, but Shinobu is used to these as she deals with Arataki Itto daily. The fandom finds it easy to picture Yanfei and Shinobu working to get Itto out of trouble.

Kuki and Yanfei as featured in the Perilous Trails banner 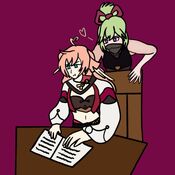